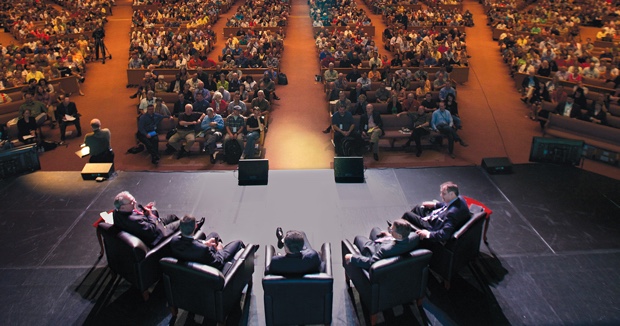 2017 Winter Conference
Scripture in the Early Church in Sanford, FL
On January 16, 2017, join us in Sanford, FL, for our Winter Conference, “Scripture in the Early Church.” Drs. Michael Haykin, Michael Kruger, and Stephen Nichols, along with Reformation Bible College professors, Drs. David Briones, Keith Mathison, and John Tweeddale, will address topics such as early Christian preaching, Augustine’s use of Scripture, and the development of the biblical canon. Learn more.

2017 Caribbean Study Cruise
The Five Solas of the Reformation
On March 12–19, 2017, join us for a time of study and refreshment in the Caribbean. Drs. Stephen Nichols and Derek Thomas will teach on the authority of Scripture, the role of grace in salvation, the work of Christ, and the goal of the Christian life. Register for this study cruise and receive free registration for our 2017 National Conference. Learn more.

2017 Regional Conference
Stand Firm in Wichita, KS
On May 19–20, 2017, join us for a regional conference in Wichita, Kansas, where Ligonier Teaching Fellows Drs. W. Robert Godfrey, Stephen Nichols, and Derek Thomas will be our featured speakers. They will consider our need for salvation, our hope in Christ, the reasonableness of our faith, and other topics. Learn more.

2017 Study Tour and Cruise
Martin Luther and The Elbe River in Europe
On July 28 — August 10, 2017, join us as we embarking on three historical and educational tour experiences that will take us from Prague to Berlin. During this special time, we will commemorate the 500th anniversary of Martin Luther’s posting of the Ninety-Five Theses at Wittenberg. Learn more.

2017 Regional Conference
Luther Today in Wittenberg, Germany
On August 11, 2017, join us for a special conference in Wittenberg, Germany, to commemorate the Protestant Reformation and to learn from Luther in our twenty-first century. Drs. W. Robert Godfrey, Steven Lawson, Albert Mohler, and others will consider the life of Luther, the doctrines he and the other Reformers proclaimed, and the means by which the Reformation was sustained, drawing lessons for the church in the present. Learn more.

2017 Land of Luther Study Tour
Berlin to Frankfurt in Germany
On August 14–21, 2017, join us where Martin Luther once lived and taught. Together with Drs. W. Robert Godfrey, Steven Lawson, Albert Mohler, and Stephen Nichols we will explore Martin Luther’s heritage from Berlin to Frankfurt, Germany, enjoying sights from his boyhood to the places where Reformation theology was born and defended. This highly anticipated tour is expected to fill quickly. Learn more.