By Grace Alone: An Interview with Sinclair Ferguson

Dr. Sinclair Ferguson is a Ligonier teaching fellow and the dean of the D.Min. program at Ligonier Academy. We’re grateful he was able to join us to discuss the theme of his book By Grace Alone: How the Grace of God Amazes Me.

Ligonier Ministries: Why do you think Christians fail to find God’s grace amazing?

Sinclair Ferguson: There are many reasons, but usually they involve three things. First, we have such a low sense of the holiness of God and we are insensitive to the sheer intensity of it. To whatever extent our sense of God’s holiness is diminished, to that extent our sense of amazement at God’s grace will be diminished. Second, we adopt superficial views of our sinfulness and too often guard against the ministry of the Word and Spirit exposing it. Jesus said that it is those who are much forgiven who love much. The reason is that those who are most conscious of their sin become most conscious of their need of grace, and therefore most aware of the wonders of grace. Third, we think too little of the costliness of grace. It comes freely to us because it was so expensive to Christ to satisfy the justice of God on our behalf. Sadly, in our contemporary “Christianesque” subculture, we are weak in reflection and meditation on Christ and the meaning of the cross.

LM: You refer to Christians as “the living dead,” stating, “Only when I see that I am among the living dead will I begin to see that God’s grace is surprising and amazing.” How does this condition highlight the surprising beauty of grace?

SF: Only sinners need grace. If I do not see myself as a sinner then I will (however foolishly) expect “fairness” from God. If I believe I have behaved “decently” toward Him (after all, I never did Him any harm!), I will expect Him to behave “decently” toward me. That is probably the world’s most popular creed. But it is not the Christian’s creed, nor is it the gospel. Only when I see my sin do I seek grace from God. That is true at the beginning of the Christian life. It remains true right to the end.

LM: In the preface of the book, you write that grace is not a “thing.” What do you mean by this statement?

SF: It is legitimate to speak of “receiving grace,” and sometimes (although I am somewhat cautious about the possibility of misusing this language) we speak of the preaching of the Word, prayer, baptism, and the Lord’s Supper as “means of grace.” That is fine, so long as we remember that there isn’t a thing, a substance, or a “quasi-substance” called “grace.” All there is is the person of the Lord Jesus — “Christ clothed in the gospel,” as John Calvin loved to put it. Grace is the grace of Jesus. If I can highlight the thought here: there is no “thing” that Jesus takes from Himself and then, as it were, hands over to me. There is only Jesus Himself. Grasping that thought can make a significant difference to a Christian’s life. So while some people might think this is just splitting hairs about different ways of saying the same thing, it can make a vital difference. It is not a thing that was crucified to give us a thing called grace. It was the person of the Lord Jesus that was crucified in order that He might give Himself to us through the ministry of the Holy Spirit.

Sinclair Ferguson also joined Chris Larson in 2011 to discuss a variety of topics, including mentoring and leadership, corporate worship, “new” calvinism, and sanctification. Watch it here. 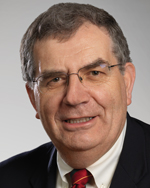 Dr. Sinclair B. Ferguson is professor of systematic theology at Redeemer Seminary, distinguished visiting professor of systematic theology at Westminster Theological Seminary, and former senior minister of the First Presbyterian Church, Columbia, S.C. He also serves as a teaching fellow for Ligonier Ministries and is the dean of the Doctor of Ministry (D.Min.) program at the Ligonier Academy of Biblical and Theological Studies. Dr. Ferguson has also written more than two dozen books, including The Holy Spirit, By Grace Alone, and In Christ Alone.