Get R.C. Sproul’s Series on Roman Catholicism for a Gift of Any Amount

Every day on our Renewing Your Mind broadcast we provide an opportunity for listeners to receive a biblically enriching resource for a gift of any amount and at the same time support the ongoing work of Ligonier Ministries. Occasionally, we highlight one of these offers on the blog.

Until Friday, you can get R.C. Sproul’s teaching series Roman Catholicism on CD for a donation of any amount. 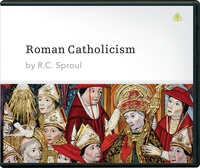 Get the complete Roman Catholicism teaching series on CD for a donation of any amount.