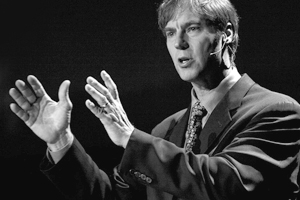 Dr. Stephen Meyer is founder and director of the Discovery Institute’s Center for Science and Culture (CSC). Since earning his Ph.D. in the philosophy of science from Cambridge University, Dr. Meyer has written for several peer-reviewed publications in science and philosophy.

Here’s a preview of what Dr. Meyer will be addressing next month at our 2014 West Coast Conference.

Darwin: A Myth for the Post-Christian Mind

The prominent atheist Richard Dawkins has said that “Darwin made it possible to be an intellectually fulfilled atheist.” Many Christian leaders have determined that the only way to survive in a post-Christian culture is to attempt a synthesis of Darwinism and Christianity. In this session, Dr. Stephen Meyer will explain why it is precisely the wrong time to capitulate since Darwinism itself is being undermined daily by new scientific discoveries.

Below is Dr. Meyer’s past conference message titled “Rock of Ages & the Age of Rocks” from our 2012 National Conference in which he explained why Christianity and science, when properly understood, are not in conflict, and that Scripture and creation can never ultimately contradict each other.

2014 West Coast Conference
Overcoming the World: Being a Christian in a Post-Christian Culture

June 6-7, 2014, we will host our West Coast conference in Seattle, WA. The conference theme is “Overcoming the World: Being a Christian in a Post-Christian Culture.” Please consider joining Drs. Steven Lawson, Stephen Meyer, Albert Mohler, R.C. Sproul, and R.C. Sproul Jr. as they address modern challenges to the Christian and how we may effectively witness to the truth in a society that seems determined to overthrow every connection to its Christian heritage. Register today and save $20.