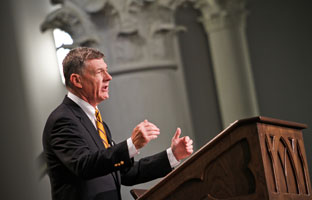 Dr. Steven Lawson is a pastor, seminary board member, Ligonier Ministries Teaching Fellow, and the author of such books as Famine in the Land and Pillars of Grace.

Dr. Lawson is committed to the Word of God and its faithful exposition. His committment is seen clearly in this exhortation to pastors:

“When the Bible speaks, God speaks. The man of God has nothing to say apart from the Bible. He must not parade his personal opinions in the pulpit. Nor may he expound worldly philosophies. The preacher is limited to one task — preach the Word.” 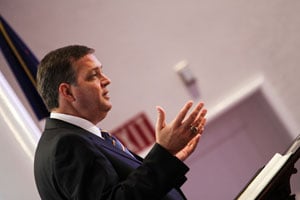 Dr. Albert Mohler is president of the Southern Baptist Theological Seminary, is a prominent voice within evangelicalism and a frequent guest on national news programs. He also hosts The Briefing, a daily podcast providing worldview analysis about the leading news headlines and cultural conversations, and has written or contributed to several books including Atheism Remix and Whatever Happened to Truth?.

Dr. Mohler was asked about the challenges the church faces in the twenty-first century. He responded:

“What we have failed to understand is that Christians in the twenty-first century are being thrown into a world in which just a little bit of Bible knowledge is simply not going to be enough. Simply having positive fellowship and nurturing experiences in the church and in the Christian family will not be enough. The church must prepare people to be able to think Christianly in a world where the intellectual rules have fundamentally changed.”

Here’s a preview of what to expect from Drs. Lawson and Mohler at our 2012 National Conference in Orlando next week.

Foolishness to the Greeks by Steven Lawson

Anti-intellectualism is not the only danger Christians face. Those who seek to reclaim the Christian mind face the opposite danger — allowing a desire to please God to mutate into pride and a vain desire for worldly respect. In this message, Steven Lawson explains how we must walk a fine line and never accommodate the gospel in an attempt to please the cultured despisers of Christianity. We have already seen the sad results of a previous attempt to do this in the nineteenth century.

I’ve Got Half a Mind Too… by Albert Mohler

Our modern culture today is a theater of the absurd where irrationalism and relativism run rampant. We are told that Christianity may be “our truth,” but it isn’t everybody’s truth. In this message, Albert Mohler looks at the roots of today’s irrationalism, exposes it’s dangers, and explains how we as Christians should respond to it and inoculate ourselves against it.

Next week, March 15-17, 2012, we invite you to come and hear Steven Lawson and Albert Mohler at our 2012 National Conference, “The Christian Mind.” It will be an edifying time of fellowship and teaching together, helping prepare you to think like a Christian in an anti-Christian culture.

The conference is only 8 days away so be sure to register today and save $30.