An Unlikely Convert: An Interview with Rosaria Butterfield

Tabletalk: Your book is titled The Secret Thoughts of an Unlikely Convert. Could you explain some of your “secret thoughts,” and why you were an “unlikely convert”? 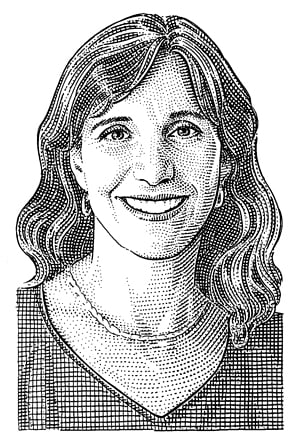 Rosaria Butterfield: I considered myself an atheist, having rejected my Catholic childhood and what I perceived to be the superstitions and illogic of the historic Christian faith. I found Christians to be difficult, sour, fearful, and intellectually unengaged people. In addition, since the age of twenty-eight, I had lived in monogamous lesbian relationships and politically supported LGBT causes. I coauthored Syracuse University’s first successful domestic partnership policy while working there as a professor of English and women’s studies. I was terrified to aliate on any level with a worldview that called me, my life, my community, my scholarly interest, and my relationship sin. Add to this that I was working on a book “exposing” the religious right from a lesbian feminist point of view. I approached the Bible with an agenda to tear it down because I firmly believed that it was threatening, dangerous, and irrational.

But when I came to Christ, I experienced what nineteenth-century Scottish theologian Thomas Chalmers called “the expulsive power of a new affection.” At the time of my conversion, my lesbian identity and feelings did not vanish. As my union with Christ grew, the sanctification that it birthed put a wedge between my old self and my new one. In time, this contradiction exploded, and I was able to claim identity in Christ alone.

TT: How has your story been received by Christians?

RB: The protagonist of Secret Thoughts is Pastor Ken Smith, who modeled to me organic Christian hospitality and the life-sustaining action of neighboring. Christian readers have responded to Ken’s example and have been encouraged by it.

TT: How has your conversion to Christianity been received by your former colleagues?

RB: At the time of my conversion, my colleagues and students treated me with suspicion and confusion. Understandably, many friends felt betrayed, exposed, and criticized by my conversion and the changes in heart, life, and writing that this produced. When a person comes to Christ and repents of sin, this turning around makes enemies out of former allies. And while this aftershock eventually led to Bible studies and many opportunities to share the gospel, it also destroyed friendships and allegiances. The exclusivity of Christ has rugged consequences.

TT: How do you respond to someone who says that one can continue to live a homosexual lifestyle and yet also be a Christian?

RB: First, I always start by asking for clarification about what she means by “Christian,” often requesting that she share her testimony (and offering to share mine as well). She may tell me that she is a Christian because she believes in Jesus and said the sinner’s prayer at a certain moment in her childhood. She also may tell me that she has a “high view” of Scripture and believes that the historic Christian church has misrepresented the issue of homosexuality. As I listen, I pray for the Lord to give me not only the words to say, but a transparent kindness that can uphold the weight of these words. I say I am glad that she believes in Jesus, but I share that the Bible calls for more than that, as even the trembling demons believe in Jesus. The Bible defines a Christian in a fuller way, including an understanding that:

(1) God set me apart from before the foundations of the world.

(2) The Holy Spirit removed my heart of stone and replaced it with a heart of flesh, leaving me with justifying faith.

(4) Repentance and belief go together, as both are gifts of God and fruit of Christian living. Without repentance there is no salvation.

Sometimes at this point in the conversation, she will ask me where she might meet this Jesus, because this is a different Jesus than the one that she knows. We open the Bible together, and I invite her to my house for dinner and church. Alternatively, if she tells me that she just interprets the Bible differently than I do, I then discuss how Jesus is inseparable from the Bible, and how the Bible is a unified revelation of God, fully true, inspired, and inerrant. At some point, if God allows, I suggest that we start reading the Bible together, reading systematically and not topically.

As you can see, I do not ask my questioner about why she identifies as lesbian or what this means to her, or when she first felt like a lesbian or had her first sexual experience. It is not that I don’t care, but if I start with her, I start in the wrong place. Instead, I start with the triune God, and call out the soul-orientation of any person with whom I speak.

TT: What is the biggest misconception that evangelicals have about those who are a part of the “homosexual community”?

RB: Reformed Christians know that God’s elect people are everywhere, but one big misconception evangelicals have is the wholesale writing off of all people who identify as gay as God-hating reprobates. Another misconception is that a person’s homosexuality is the biggest and most life-defining sin of her life. When Ken Smith, the pastor the Lord used in my conversion, first met me, he knew that being a lesbian was not my biggest sin. My biggest sin was that I was an unbeliever.

TT: What counsel would you give to Christians as they attempt to preach the gospel to those who experience same-sex attraction?

RB: First, we need to apologize for “gay jokes” that we said or condoned in silence.

Next, we must: (1) counsel people who have repented from homosexual sexual pasts and feel called to heterosexual marriage; (2) encourage people who live daily with unwanted homosexual desires and feel called through justifying faith to celibacy, helping these brothers and sisters to resist temptation, secure accountability, and rely on the Word and on the fellowship of the saints to renew minds and affections; (3) lift the unearned burden of guilt off of the parents of children who identity as gay or lesbian; and (4) create meaningful community from within the membership of the church. To offer intentional commitment to members who are lonely and isolated, the church must demonstrate in everyday ways how we care for each other from cradle to grave. In the LGBT community in the 1990s, I learned the power of accompanied suffering, of standing together in grief as we faced the AIDS virus. The hospitality gifts I use today as a pastor’s wife, I honed in my LGBT community.

Pastorally, the Westminster Standards give us much wisdom about sanctification and offer helpful correctives to the unbiblical teachings of our day. It is important to tell people who struggle with sexual sin that their struggle is not proof that God is not working sanctification in them, because God knows that sanctification is both imperfect and incomplete in this lifetime. For the church to lovingly counsel those who experience unwanted homosexual desire, she must steer clear of parachurch ministries that hold to a false understanding of sanctification (that it is complete in this lifetime) or an over-actualized eschatology (that God wants you to experience perfection this side of the second coming). The Reformed church is much more competent to counsel because of the systematic theology that informs our understanding of law and grace.

TT: What three things would you tell a Christian young person who is experiencing same-sex attraction and is tempted to selfidentify as a homosexual?

RB: (1) Don’t embrace labels that God doesn’t use. God does not rank-order His beloved sons and daughters. If you are a believer, then your identity is in Christ and Christ alone. Memorize Colossians 3:1–4, remembering that “you have died, and your life is hidden with Christ in God” (v. 3). Meditate on what it means to take refuge in Christ. And remember that union with Christ and the communion of the saints go together, so don’t isolate.

(2) As you practice the ordinary means of grace—Bible reading, psalm singing, taking the sacraments—do so with the communion of the saints. Don’t isolate. Be a fully present member of your church. If you struggle with unwanted homosexual desires, tell your pastor, elders, and friends so that they know how to pray for you and love you. But don’t think that the fact of these feelings makes you a dangerous person. A dangerous person is someone who either does not know what sin pattern percolates within him or foolishly believes that if he hides it, he is controlling it.

(3) Know your enemy. Unwanted homosexual desire is not the unforgivable sin. It is a vestige of the fall, and as such, is a vestige of original sin, the ultimate “pre-existing” condition. Daily, I ask the Lord: Lord, how has my original sin distorted me, how is my indwelling sin manipulating me, and how is Satan enlisting me? Your temptation pattern does not define you, but you must be armed for the battle, knowing that victory is promised, in God’s timing, incomplete but powerful here on earth, and complete and full in eternity.

Dr. Rosaria Butterfield is a pastor’s wife, full-time mother, and speaker. She is author of The Secret Thoughts of an Unlikely Convert, a book detailing the experiences of her journey to Christianity. A former tenured professor of English at Syracuse University, Dr. Butterfield started a college ministry upon her conversion to Christianity in 1999. Dr. Butterfield is a member of First Reformed Presbyterian Church of Durham, N.C., where her husband, Rev. Kent Butterfield, serves as senior pastor.