Turning a New Page: An Interview with Allan Fisher

Tabletalk: How did God call you to the vocation of book editing and publishing? 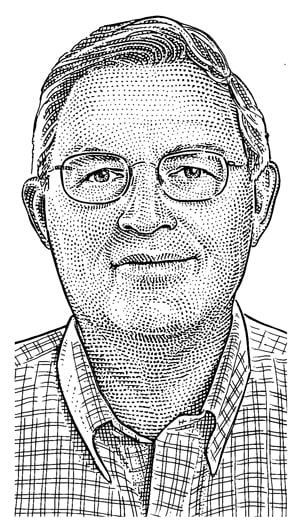 Allan Fisher: God called me to Christian publishing in a variety of ways, only a few of which I will mention here. Through an excellent fourth-grade teacher, I first became a serious reader. During ninth grade I became confident of my God-given academic abilities. Through my new stepfather the following year, I was introduced to an extensive personal library and taken to bookstores, new and used. During my senior year of high school I came to Christ and became a student of the Bible. A college professor worked through my senior thesis with me line by line, resulting in numerous and extensive revisions that opened my eyes to the beauty of the editorial craft. In seminary, assigned to write a book review, I pointed out how an editor could have greatly improved the book. The professor didn’t appreciate this approach, preferring that I focus more on the book’s substance, but my eyes had been opened yet further.

After seminary, God kindly led me away from other, more typical callings for seminary grads and guided me into Christian publishing. This proved to be the perfect fit for my personality, gifts, and interests, and it put to full use my undergraduate degree in religion and my master of divinity degree. I will be forever grateful to God for allowing me to devote forty years to an endeavor so worthwhile and satisfying.

TT: What are some highlights of your career in Christian publishing?

AF: The highlights are many: I was mentored for more than fifteen years by Herman Baker, founder and president of Baker Book House and a wonderful Christian gentleman and mentor. During my last eight years at Crossway, I’ve been privileged to work for President Lane Dennis, a most remarkable publisher and a devoted follower of Christ. Another highlight has been a twenty-year association with R.C. Sproul, as well as the opportunity to publish John Gerstner, who taught R.C. at Pittsburgh Theological Seminary and me at Trinity Evangelical Divinity School.

Publishing ground-breaking works by Richard Muller will always stand out in my memory, as will collaborating with him and others in the Dutch Reformed Translation Society to lay the groundwork for the publication in English of Herman Bavinck’s Reformed Dogmatics. Crossway is also releasing a new book by David Wells that, by God’s grace, will also have a positive impact for the Reformed faith. I could go on. God has been most gracious to me over the years.

TT: In your years of working in the publishing industry, which book topics have risen and fallen in popularity? Which topics are perennially popular?

AF: As strange as this will sound to younger readers of Tabletalk, when I entered publishing, American evangelicals cared little for the Puritans in general and Jonathan Edwards in particular. Dr. Gerstner, the leading evangelical Edwards scholar of his day, was ahead of nearly everyone in this regard. How times have changed, particularly in Reformed circles. Books based on Reformed theology in general enjoy better sales today than formerly. Three subjects in demand during my early years were biblical prophecy, the role of men and women in the church and home, and recovery from addictions. All three subjects have largely lost their appeal. Perennial favorites are books on marriage and parenting.

TT: Do you believe the future of the Christian publishing industry is bright?

AF: Absolutely. Shortly after printing was invented, God used print mightily during the Reformation, and He has continued to do so. Christianity is a religion of the Book, which gives Christian publishers a somewhat unique role in aiding the church in building the kingdom of God. The Internet, with all its problems, also provides Christian publishers with the means to communicate directly with their most dedicated readers, while allowing the latter to keep track of what their favorite publishers plan to release next. Bloggers and online periodicals have become the source of most book reviews, increasing the number of “published” reviews.

TT: What challenges do Christian publishers face in the coming decades?

AF: The primary challenge is to be faithful to the mission of Christian publishing: to bring glory to God and to assist the church in its mission as articulated in Scripture. Countering this are the marketer’s desire to give people what they want and the entrepreneur’s determination to maximize profit. Most of Christian publishing today is done by for-profit publishers, and many companies are now owned by multinational corporations that will support a Christian mission only as long as it generates sufficient profit. The two largest Christian publishers, Zondervan and Thomas Nelson, are now yoked together in HarperCollins Christian, which in turn is owned by News Corp. The effect of this merger on other Christian publishers remains to be seen.

TT: What are three ways that Christian publishers can better serve the church?

AF: First, by allowing Scripture, not the market, to direct their publishing programs. Hire at least some editors with sound biblical and theological training, editors who are active in church life. Second, by publishing books that reflect the crucial role of the church in the Christian life, rather than books that focus exclusively on the reader’s individual relationship to God. And third, by choosing with utmost care the church leaders to whom they offer publishing contracts. The fact that a man is senior pastor of a megachurch and has a successful broadcast ministry should not automatically qualify him for a book contract.

TT: How have the Internet and companies such as Amazon.com changed the publishing world?

AF: Amazon has captured an unprecedented share of the retail book market, making it the largest customer for nearly all publishers—including Christian companies. Amazon has accomplished this by making the purchase of books so convenient, whether print books or e-books. For one sales channel to become so dominant, however, leaves publishers more than a little vulnerable. The Internet represents publishers’ best hope of generating interest in their new and forthcoming publications. It also enables Christian chain and independent stores to reach out to their customers less expensively than before.

TT: What are some benefits and drawbacks regarding the shift to electronic books that we are seeing in our day?

AF: Electronic books (e-books) are perfect for people on lengthy business trips or vacations who want to take along a wide range of reading without weighing down their luggage. For “disposable books” such as mass-market paperbacks and popular fiction, e-books also work well. As a replacement for some kinds of reference works, they’ve proven themselves. When it comes to longform nonfiction, however, e-book technology cannot, on balance, match the technology of printed books. When poring over a book with multiple elements (notes, figures, diagrams, charts, appendices, bibliographies, professionally prepared indexes, and so forth), I’d choose a printed book every time.

TT: Do you believe e-books will ever replace traditional books?

AF: No. The technology of the printed book is just too good to be replaced completely by e-book technology. For large reference works that benefit from periodic updates and for disposable books, the e-book format may replace print. But for serious nonfiction, the technology of the printed book is superior, making it much easier to find one’s way around in the work, notate passages, and so forth. In addition, tablets are now replacing dedicated e-readers. While tablets function as well as the latter for reading e-books, they also place at the user’s fingertips several attractive options: the Internet, e-mail, e-games, Skyping, and more. While an e-reader can be compared to a bookstore and book reading room, an iPad can be compared to a variety store with a video-games area, a TV department, a stationery department, a branch post office, a telecommunications center, and, in the back, a book department. In such a variety store, how much attention will books receive?

TT: Do you have any advice for prospective Christian authors who are seeking to get a book published?

AF: If you want to find a regular publisher (rather than do some form of self-publishing), do your homework. Think through what you want to write. Are you qualified to write a published book on this subject? Is there a real need for this book? For which category of readers will you write? Which companies publish books similar to the one you wish to write? Compose an attention-grabbing, articulate query letter and send it via e-mail to the acquisitions departments at the companies you’ve selected. Do not attempt to contact an acquisitions editor by phone; few companies are staffed sufficiently to handle such calls. Any editor who is interested in further communication with you will explain the next step. Trust God’s providence in these matters. If you want to write for publication, work at becoming a good writer. Read the great writers. Keep a journal. Join a writer’s group. Share drafts with others and seek their candid comment. We’re not all called to write for publication; those who are, as with any other calling, must pursue it with all diligence.

Allan Fisher served as Crossway’s book publisher for the last eight years and as senior vice president and publisher for books before retiring this year. He spent nearly forty years in publishing, beginning at Baker Publisher Group and serving there as director of publications. He held the same position at Presbyterian & Reformed Publishing for five years. He continues to work part-time at Crossway on special projects and in an advisory capacity. He is a member of Bethel Presbyterian Church (OPC) in Wheaton, Ill.