A Revival of Calvinism: An Interview with Iain Murray

Tabletalk: What are the top three puritan works that every Christian should read and why? 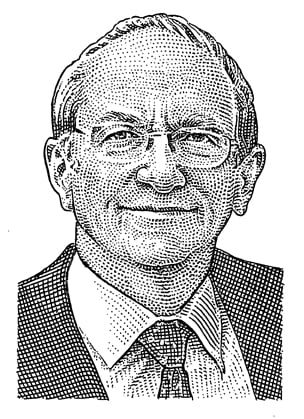 Iain Murray: The Westminster Shorter Catechism; Heaven on Earth by Thomas Brooks (on assurance); Nature and Causes of Apostasy by John Owen (Works of John Owen, vol. 7); and many other “top” ones. Beginners should start with Brooks, Thomas Watson, or John Flavel.

TT: What book (new or old) have you found the most helpful in your past year of reading?

IM: For particular reasons, the majority of my reading in 2010 was in the works of John MacArthur and Archibald Brown (I hope to see published this year The Forgotten Brown, Spurgeon’s Successor).

TT: It has been over ten years since the publication of Evangelicalism Divided. To your mind, what is the greatest strength of evangelicalism today? The greatest weakness?

TT: When Banner of Truth Publishing opened it s doors, there were not a lot of Reformed publishers, and many old Reformed books were long out of print. Tell us a little bit about those early days.

IM: For a long time in Britain, books f rom the older Christian heritage were in no demand on the secondhand market, and publishers commonly regarded them as virtually unsalable. With a few important exceptions (for example, Calvin’s Institutes and Ryle’s Holiness), new reprint s in the Reformed tradition only circulated in the UK from the few U.S. publishers promoting such books around 1950. Behind the change that began in Britain was the praying of an older generation and the preaching of Martyn Lloyd-Jones. His ministry at Westminster Chapel aroused hunger for different Christian literature and got a new generation reading. The Banner of Truth Trust, started at Westminster Chapel in 1957, was one of the new agencies which appeared at that period.

TT: A number of journalists and others have observed a resurgence in Reformed theology in recent years. What role do you think Banner of Truth may have played in such a resurgence?

IM: I am too close to it to judge. Certainly, its publications proved to other publishers that there was a readership for books that came from an ethos considerably different from that of contemporary evangelicalism. I believe the Banner books have also played a part in renewing the recognition that church history is thrilling, and that the most valuable commentaries on Scripture are not the technical and academic ones.

A priority in the Banner’s publishing vision was to help raise another generation of preachers.

The part that Calvinistic literature has played in helping churches from Brazil to Korea has also been noteworthy.

TT: For our readers who may not be familiar with your work on revival and revivalism (and your book of the same title), could you give us a brief overview of these terms and how revival relates to the work and responsibility of the church?

IM: My book Revival and Revivalism traces evangelical preaching in America in the formative years from the 1750s to 1857. On the basis of such promises as that of Christ to be with us “always,” preachers believed that there would always be an ongoing work of grace in the churches. At some periods, however, the ingathering was large and sudden, and the name revival came into use, being understood as an exceptional work of the Spirit of God.

But in the nineteenth century, a school of thought developed that believed revivals could be permanent if only the churches were faithful and used the right methods. The argument was that just as one individual is converted by accepting Christ, why cannot numbers be induced to accept Him at the same time? According to this thinking, “revivals” occur in proportion to human effort. The mistake was to ignore that regeneration (a change of nature) is the true cause of conversion, and it is not within the ability of speaker or hearer to determine when anyone passes from death to life (Eph. 2:8). The church is to preach Christ, but He determines the increase (Acts 13:48; 1 Cor. 3:6). It was when this truth was ignored that methods to achieve “conversions” multiplied and “revivalism” was born. The controversy that followed was not between those for or against evangelism; it was about what evangel ism real ly means, as John MacArthur has shown so clearly in his books The Gospel According to Jesus and The Gospel According to the Apostles. Men of outstanding stature opposed the new teaching when it entered in the nineteenth century, and their biographies are among the best in Christian literature.

TT: You have written well-received biographies of Jonathan Edw ards, Charles Spurgeon, Arthur Pink, and Martyn Lloyd-Jones. Why do you believe that reading biographies of great Christians is important?

IM: The reason church history is not always thrilling is that people do not read it around the flesh-and-blood figures of men and women whom God used to shape its course. Biographies raise the questions: Why were individuals so used? What made Mary Slessor or William Carey? What are the abiding spiritual lessons? Biographies show that doctrinal belief is not a secondary or theoretical thing; rather, it has vital consequence in the way Christians live. Weak doctrine produces weak lives. Those who “turn the world upside down” are always those “mighty in the Scriptures.”

Scripture says, “Whoever walks with the wise becomes wise” (Prov. 13:20). God has given us enduring friendships with the wise of other generations through their books. “Next to the Holy Scriptures,” said A.W. Tozer, “the greatest aid to the life of faith may be Christian biographies.”

TT: Who are some of the people you have learned from the most in your ministry?

IM: I owe a great debt to many people. In my university years, there was no one who impressed me more as a Christian than Sarah Cochrane, a Salvation Army woman, who washed the floors in our college and had to live with a drunken husband. Among my greatest helpers were older men who led me to good books: F.J. Hobbs (a tailor) and S.M. Houghton (a schoolmaster). Later on, my generation had the privilege of knowing John Murray (who spent much of his life at Westminster Seminary, Philadelphia) and Martyn Lloyd-Jones. They were humble, godly leaders.

We never know how our lives will touch others. For example, how few of the names of mothers are known to the world, but how different Christian history would have been had their hidden ministry not been exercised. And what Christian man can say how much he owes to his wife? For all Christians, the words are true: “Let us not grow weary of doing good, for in due season we will reap, if we do not give up” (Gal. 6:9).

Iain H. Murray is cofounder of Banner of Truth Trust in Edinburgh, Scotland, and an ordained minister of the Presbyterian Church of Australia. He is a prominent author and biographer, having written more than twenty books, including Heroes, The Forgotten Spurgeon, Jonathan Edwards: A New Biography, Revival and Revivalism: The Making and Marring of American Evangelicalism, and Evangelicalism Divided: A Record of Crucial Change in the Years 1950 to 2000.