Tabletalk: How did you become a Christian, and how did the Lord call you to ministry with The Navigators? 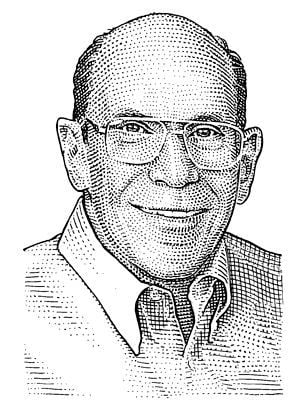 Jerry Bridges: I grew up in a church that had an altar call at every Sunday service. I went forward at ages 9, 11, and 13, but was never born again. Finally, at age 18, alone in my bed one night, I prayed, “God whatever it takes, I want Christ to be my Savior.” Instantly I had assurance of my salvation.

While serving in the Navy during the Korean War, I met The Navigators through another Navy officer and began to grow spiritually through their discipleship program. About a year later, while doing Bible study, something in the passage I was studying caused me to ask the question, “Would I be willing to serve with The Navigators?” Shortly after that, I failed a physical exam and six months later received a medical discharge. At that time, The Navigators leadership asked me to serve as a trainee in San Diego. That was in 1953.

TT: Who are The Navigators and what is their mission? What has your work with them involved?

JB: The Navigators started in 1933 when a civilian, Dawson Trotman, began to disciple one sailor aboard a battleship stationed in Long Beach. That sailor began to disciple another one, and before long, there was quite a group of them aboard the ship. They began to visit churches in the area to share their faith, and they needed a name for their group. As sailors, they chose the name The Navigators. Today The Navigators has expanded far beyond the military ministry and has more than four thousand people from about thirty nationalities serving in more than one hundred countries. Our focus is on laypeople, training them to evangelize and disciple other people where they live and work and for college students to do so among their fellow students.

In 1956, I was asked to become a part of the home office administrative staff. I served in various administrative roles through 1994. However, in 1986, I started writing outside of office hours. My first book, The Pursuit of Holiness, was published in 1978. Much to everyone’s surprise, including my own, the book became a best seller. As a result, I began to receive invitations to speak at churches and conferences outside of The Navigators. Over the next fifteen years, I gradually transitioned from administration to being a writer and Bible teacher. Since 1997, I have done that full time in our U.S. collegiate ministry.

TT: What is the most rewarding aspect of ministering to college students?

JB: Seeing them develop the spiritual disciplines and habits that will enable them to worship, obey, and serve Christ for the remainder of their lives and to pass on what they have learned to other people. I cannot tell you how many people I have met in my travels over the years who have expressed to me gratitude for the discipling they received from The Navigators during their college days.

TT: Over the course of your ministry, what is the most common spiritual struggle that you have seen college students face, and how can the local church help college students in that struggle?

JB: I think the most common spiritual struggle has changed dramatically over the years. Today the greatest struggle is with Internet pornography. This is true of almost all male students and almost half of female students. And it’s not just the Internet: they are constantly bombarded with sexually stimulating images through TV and other media.

The involvement with Internet pornography often begins in the early teen years; therefore, both churches and parents should make dealing with this issue a top priority. This is not the place to get into the how-to’s, but there are various resources available.

TT: You point out in your book Trusting God that many Christians find it difficult to trust God in adverse circumstances. What are two ways that we can learn to trust God, even when times are tough?

JB: Trusting God in tough times involves believing first of all in the sovereignty of God; that He is in absolute control of all the events and circumstances of our lives. Second, we must believe that He is just as loving as He is sovereign, and that He allows nothing into our lives that is not for our ultimate good. It also involves believing that He will never leave us nor forsake us in the midst of these tough times. Though these are the main points, we must also realize that God’s ways are often mysterious and inscrutable, so we are called to trust Him even in circumstances that we do not understand.

TT: If Christians are already declared righteous in Christ, why should they pursue personal holiness?

TT: What are “instruments of grace”?

JB: The instruments of grace are the personal spiritual disciplines that God has given us for our benefit. These include time alone with God every day, regular reading and study of the Bible, Scripture memorization, and prayer. I call these the personal disciplines. There are also the corporate disciplines of worshiping together, hearing God’s Word taught, and participating in the sacraments.

TT: Many people think personal discipline is opposed to grace. Is this true? If not, why?

TT: In your book Respectable Sins, you address several sins that Christians often overlook because we might think they are less offensive to God than other sins. Besides the ones you mentioned in your book, what are some “respectable sins” that Christians engage in?

JB: One of the most common sins that Christians engage in is to doubt the love of God in the midst of adversity. We tend to think, “If God really loved me, He would not allow this to happen to me.” I think other respectable sins fall in the category of failure to exhibit positive Christian character traits such as compassion, humility, kindness, goodness, and joy. A fairly complete listing of these character traits is found in Galatians 5:22-23 and Colossians 3:12-14.

TT: Which teacher has taught you the most about the pursuit of holiness and why?

JB: The Puritan theologian John Owen, through his books, has been my mentor and has taught me the most about the pursuit of holiness. His book Temptation and Sin, which is actually a combination of three treatises on sin, helped me avoid the two extremes of “try harder” and “just let Jesus live His life through me.”

TT: What are some of the most significant lessons that God has taught you over a lifetime of ministry?

JB: In the order that I learned them, the first would be that God’s Word, both His precepts and promises, is meant to be applied to specific situations in our lives.

The second is the importance of our union with Christ, both as our representative before God in His life and death, and then as the source of our spiritual life as Jesus taught us in the vine-and-branches metaphor of John 15.

The third is that the pursuit of holiness involves our most diligent efforts, but with a dependence on the Holy Spirit to bless those efforts.

The fourth is my understanding and acceptance of the doctrine of God’s sovereign election in our salvation. This is probably the most life-changing of all the lessons.

The fifth is that the gospel is not just for unbelievers and their coming to Christ; rather, all of us who are believers need the gospel every day because we are still practicing sinners.

The sixth is an increased understanding of the role of the indwelling Holy Spirit to apply the work of Christ to us and enable us to grow in the Christian life.

Dr. Jerry Bridges is an author and speaker, as well as a staff member at The Navigators in Colorado Springs, Colo., where he has served since 1955. Among his many books are The Discipline of Grace: God’s Role and Our Role in the Pursuit of Holiness, Who Am I?: Identity in Christ, Trusting God: Even When Life Hurts, Respectable Sins: Confronting the Sins We Tolerate, and his most popular work, The Pursuit of Holiness, which has sold more than two million copies.