Holding the Line: An Interview with R. Albert Mohler Jr.

Tabletalk: In 1993, shortly after your appointment as president of The Southern Baptist Theological Seminary, there was substantial faculty fallout and a sharp move in an orthodox direction. Would you give us a glimpse into that time for you and how a seminary could do an about-face in such a short span of time? 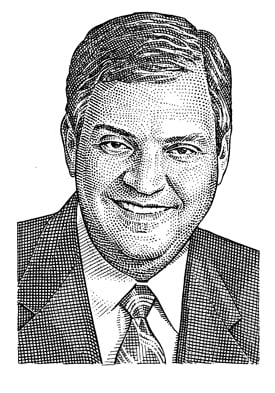 Albert Mohler: My election as president of Southern Seminary came in the course of a larger movement within the Southern Baptist Convention (SBC) — a movement that was specifically an attempt to bring the denomination back to its theological roots and especially to ground the denomination and its schools in a very clear affirmation of biblical inerrancy. The seminaries of the SBC had drifted considerably to the left over the previous half-century to the point that, in many ways, they were almost indistinguishable from mainline Protestant institutions. My election in 1993 did not occur in a vacuum. It was very much a part of this effort, and everyone knew what was at stake. I think I was elected, at least in part, because I had a very clear plan for how to bring a theological correction to an institution like Southern Seminary, the mother seminary of our denomination. It would be costly, it would be controversial, and it would be extremely difficult. But the only way to reform an academic institution and to bring it back to a clear affirmation of biblical orthodoxy was to make clear that we were a confessional institution that held to those doctrinal parameters.

It was indeed a very difficult time. The controversy and the conflict were, in human terms, almost unbearable, but it was clear to those who love biblical truth that it would be far better for the institution to die than for it to continue in the direction that it had been headed for several decades. Those of us who undertook this task understood it was a great risk, but we also understood that it simply had to be done. Institutions move left progressively, inch by inch. They move in a more liberal direction compromise by compromise. But you cannot correct an institution the same way. Confessional integrity is not something that can be accommodated to a progressive timeline. There is no way to say, “We are tolerating less and less heresy and false teaching.” If confessional integrity is to mean anything, it must stand as an absolute standard. For that reason, we went through five or six years of very intense controversy, and on the other side of it, we were able, by God’s grace, to emerge with a very clear confessional identity. We have a faculty of incredible scholars who are committed to teach within our confessional statement, and thousands of students have come to Southern knowing exactly where we stand.

TT: In what ways can the church better prepare its members to meet the challenges of the twenty-first century?

AM: For far too long, evangelical churches have simply assumed that it is our task to give our church members a basic level of biblical knowledge, to create opportunities for Christian fellowship, and to encourage parents in the Christian nurture of their children. But what we have failed to understand is that Christians in the twenty-first century are being thrown into a world in which just a little bit of Bible knowledge is simply not going to be enough. Simply having positive fellowship and nurturing experiences in the church and in the Christian family will not be enough. The church must prepare people to be able to think Christianly in a world where the intellectual rules have fundamentally changed. They are going to have to learn to be faithful in terms of everyday decision-making, in terms of profound moral questioning, and in terms of political, economic, and cultural issues. It is not that the church needs to be constantly talking about the culture; rather, it is that with the cultural challenge around us, we need to be talking more and more about the Bible and coming to a deeper understanding of the Scriptures. The church must equip its members to be deeply biblical so that the theological mode of thinking is something that comes naturally to believers. Such Christians will be saturated with biblical truth, sustained by the life of the congregation, and encouraged into faithfulness by the communion of the saints.

TT: To what extent do you expect the church to influence the state, and vice versa, in this fallen world (i.e., what are the healthy parameters of this relationship)?

AM: God clearly has a purpose for both the church and the state, even in a fallen world. The purpose of the church is eternal. God’s intended purpose for the state is temporal. The state has a responsibility to uphold justice and to create the set of conditions for an orderly civic life, but the modern state finds itself now exhausted by attempting to do far more than these things. The state has encroached upon the domain of the family and the roles of mediating institutions — those institutions between the individual and the state. The state increasingly threatens even the autonomy of the church and the freedom of the church to fulfill its ministry.

I believe that the church must influence the state insofar as the church has the opportunity to bear witness to the gospel and the totality of biblical truth. That is to say, the church must produce Christians who, in a Romans 13 sense, are properly related to the state as agents for gospel influence. I do not expect that in a fallen world the state will submit itself to the church, but I am far more concerned that the church not submit itself to the state. Though the church’s relationship to the state must always be one of respect, the church must fulfill a prophetic role, understanding the church’s eternal responsibility as the people of God over against the state’s temporal responsibility. Healthy parameters of that relationship include Christian citizens understanding that their faithfulness to Christ supersedes their identification with the state, their allegiance to the state, and commitments that may be demanded by the state. The parameters of a proper Christian citizenship are established by gospel priorities and by the teaching of Scripture. Jesus made clear that we are to render unto Caesar the things that are Caesar’s. But Christ was also very clear in setting limitations upon the things that Caesar could claim.

Over the history of the Christian church, there have been many lamentable moments of the church’s persecution by the state. But the more ignominious and disastrous moments are when the church has been servile to the state.

TT: Although there are many, is there one lesson the Lord has taught you that you would care to share with us?

AM: I think the one great lesson the Lord has taught me over these years is that the importance of the family and the local congregation supersedes every other relationship to which the Christian is called. Christians demonstrate the glory of God and the power of the gospel by the way we marry and stay married, by the way we raise our children, by the way we love each other, and by the way we live faithfully in the congregation of believers. In the end, I fear that far too much energy is devoted to and far too many hopes are invested in institutions, programs, and projects that will not last. The centrality of Christ’s purpose to glorify himself in His church and the blessings of God that are directed to the precious gift of the family — these far exceed our other allegiances.

TT: What project(s) are you working on currently?

AM: I am walking around with a set of ongoing writing projects, with top priority given to a book on the doctrine of creation, entitled Maker of Heaven and Earth. Two other projects include a book on Christians and social media and a book on leadership. These matters form the urgent part of my current writing. I am also working through longer-term projects on the Apostles’ Creed, the Lord’s Prayer, and a vision for Christian higher education. The reality is that my projects almost never turn out exactly as I intended because of what, humanly speaking, I might define as interruptions, but understood in terms of God’s providence are redirections of my energy and attention. In the end, these projects are always stronger because of those interventions.

R. Albert Mohler Jr. serves as president of The Southern Baptist Theological Seminary. In addition to his presidential duties, Mohler hosts Thinking in Public, an interview forum about frontline theological and cultural matters; and The Briefing, which seeks to enable Christians to think biblically about current events. He has served as pastor and staff minister of several Southern Baptist churches and came to the presidency of Southern Seminary from service as editor of The Christian Index, the oldest of the state papers serving the Southern Baptist Convention. Dr. Mohler has served in several offices in the SBC, including a term as chairman of the Committee on Resolutions, which is responsible for the denomination’s official statements on moral and doctrinal issues. In 2000, Dr. Mohler served on a panel that made recommendations to the SBC for revisions to the Baptist Faith and Message, the statement of faith most widely held among Southern Baptists. He currently serves as chairman of the Southern Baptist Convention’s Council of Seminary Presidents.