Growing in Christ, Serving in Ministry: An Interview with Sinclair Ferguson

Tabletalk: How did you become a Christian, and what brought you to the United States from your native Scotland? 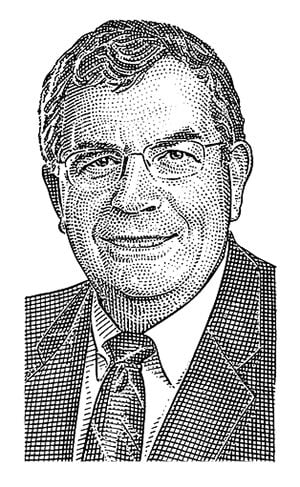 Sinclair Ferguson: I was brought up in a close family, with loving parents who tried to get me to keep the commandments, but outside of the church. However, they enrolled me in the local church Sunday school—that was still considered the “decent thing” to do for your children. In God’s providence, I had a series of Christian teachers who impressed me, although I did not understand why. One of them encouraged me to join a U.K. Bible reading organization called the Scripture Union. It published monthly Bible reading notes. From age nine to fourteen, I read Scripture daily and diligently, prayed, and tried my best. I thought that made me a Christian. Then when I was fourteen, several things happened. One was a small awakening among people I knew. For the first time, I saw in teenagers a little older than me what I had read about in the New Testament. I experienced a deepening sense of my own sinfulness. And in my regular daily Bible reading, I came to John 5:39–40—the first text in Scripture I remember reading and thinking God might be saying, “I am speaking to you!” A couple of friends encouraged me to go to a Saturday night gathering in a church in the center of Glasgow called St. George’s Tron (where I later became the minister). The sermon text was John 8:12. That first Saturday night in February 1963, I began to follow the Light of the world.

Twenty years later, we came to the United States to teach at Westminster Theological Seminary. It is a long story, but the human instrument was Ed Clowney, then the president. Over an extended period of time he wooed me into coming to the States, despite my long list of reservations.

TT: What are some of the most common struggles laypeople have brought to you in your ministry, and how does the gospel address those struggles?

SF: Probably the two most frequent have been related to personal sin and personal assurance. With respect to the first of these (sin), I usually point people to Colossians 3:1–17 and to other passages that further explain it. It underlines a number of powerful gospel truths: (1) It clarifies our resources in our new identity in Christ (vv. 1–5). We are united to Him in His death, burial, resurrection, ascension, and heavenly session, and we know that He will not return without us. (2) It helps clear up confusion about our relationship to sin (we are no longer under its reign, although we are not yet free from its presence, hence we fight it from a standpoint of strength—but we do need to fight it). (3) It points us to the two-beat rhythm the gospel develops in us for overcoming sin—putting off the old (vv. 5–11) and putting on the new (vv. 12–17). Here we have what Thomas Chalmers famously called “the expulsive power of a new affection” in vv. 1–4, and then in vv. 5–17 the “gospel replacement” pattern in which through the Spirit we “put off” everything that doesn’t “suit” being in Christ, and at the same time “put on” everything that “fits” being in Christ. Never one without the other.

With respect to assurance, we need to have some sense of whether someone really is a Christian in the first place (1 John is a great resource here, so long as it is used as an encouragement and not, as sometimes, as though it were written to accuse and condemn). Then, I find two approaches have helped:

The first is to clarify that our assurance is not resourced in ourselves, or even in our faith as such, but in Christ. The gospel tells us to “fix our eyes on Jesus” (Heb. 12:2), since all the resources for both salvation and assurance are found in Him.

Problems with assurance are usually not solved by talking about assurance (although those who lack assurance want to talk about that) but by helping people understand the gospel—justification by faith alone, the love of Jesus, the struggles of the Christian life, the providence of God, the wiles of the devil, and sometimes their own personalities.

The second approach is one I adopt when it seems appropriate: open John Bunyan’s The Pilgrim’s Progress and read a relevant section. Bunyan writes about struggles with assurance in personalized story form. What people usually need is simply the light of the gospel shining on their situation. On occasion, Bunyan’s use of the gospel in story form does exactly this, and I find people say, “That’s exactly me!”

TT: We often hear of the calling for pastors to be theologians. What does it mean to be a theologian, and how can pastors fulfill that calling?

SF: Being a theologian means, in essence, having a comprehensive knowledge of the gospel in all its many facets and interconnectedness. I liken it to being a physician who understands anatomy, and a pharmacist who understands body chemistry and knows his pharmaceuticals. Without a good working knowledge of theology, we will never understand how the gospel works, nor what the causes of spiritual sicknesses are, nor what gospel remedies to apply. In addition, we will be very poor at destroying the intellectual strongholds of unbelief, since we ourselves will lack the stronghold of the whole counsel of God.

TT: You serve in Ligonier Academy’s Doctor of Ministry program. How does this program serve the church?

SF: In a sense, it seeks to encourage exactly what was in view in the previous question. Unlike some DMin programs that deal with pastoral engineering and are weighted on the “practical” side of ministry, the Ligonier Doctor of Ministry program is richly theological. The faculty are all committed to theology as a shaper of practical ministry. Plus, the class gatherings readily morph into mini spiritual retreats as well as mutual encouragement gatherings for the pastors who come. So they begin being biblically and theologically rooted and end up having hugely practical repercussions.

TT: What counsel would you give to a young man who struggles with whether he is called to pastoral ministry and, therefore, whether he should attend seminary?

SF: It would depend on how well I knew him, of course. But I think my counsel would include reflections such as:

(3) On the other hand, try to be clear whether your struggle is with (a) your clarity about God’s calling or (b) perhaps about your own willingness to be obedient.

(4) There are three elements in a call to ministry: (a) a divinely given desire; (b) the requisite gifts and graces (for example, as set out in 1 Tim. 3:1–7 as well as a desire to become the kind of undershepherds described in 1 Peter 5:1–4); and (c) the encouragement and recognition of the church, eventually formally in ordination but long before that in the way fellow believers receive and recognize your present service to and among them.

(5) In this last context, I might tell my own story or that of someone else. It is usually the story of the awakening of desire to serve Christ and His people (2 Cor. 4:5 has been a big text for me here). It is a deep sense of “how can I possibly do this?” And then it is the help of fellow believers who give encouragement to go forward because they have received something from Christ through our present service.

(6) Make sure you are willing for a twenty-four/seven lifestyle in which the aim is “love that issues from a pure heart and a good conscience and sincere faith” (1 Tim. 1:5). And if you plan to marry, or are already married, be aware that the quality, commitment, and courage of your ministry is unlikely to rise above the level of your wife’s commitment to it, to your people, and to you.

(7) It is a calling so wonderful that I wish I could begin it all over again.

Dr. Sinclair B. Ferguson is dean of the Doctor of Ministry program at Ligonier Academy of Biblical and Theological Studies and a Ligonier teaching fellow. He is also distinguished visiting professor of systematic theology at Westminster Theological Seminary in Philadelphia and former senior minister of the First Presbyterian Church, Columbia, S.C. Dr. Ferguson has written more than two dozen books, including The Holy Spirit, By Grace Alone, and In Christ Alone. He and his wife, Dorothy, live in Scotland.