The Gospel for the Hopeless: An Interview with John Barros

Tabletalk: What is “Who Will Stand“? What led you to start this ministry?? 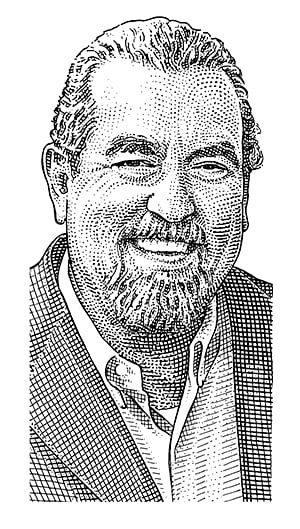 John Barros: I’ve been ministering at the Orlando Women’s Center for eleven years. I’m blessed beyond anything I could have imagined as I have been able to see God turn the hearts of hundreds who saw no hope. I started the website whowillstand.net to encourage other men to “adopt” their local abortion clinics and see the Lord work there as He does here.

TT: What is a typical day of ministry like at the abortion clinic?

JB: We pray for those on their way to the clinic, asking God to work on their hearts. When they arrive, we introduce ourselves, letting them know we are here for them and that God sent us to call them to trust Him. We give them the “In the Womb” tract and a card to the local crisis pregnancy center, which will do an immediate ultrasound. God turns many hearts right away.

When others go into the clinic for their paperwork, I preach. The building is twenty-five feet from the sidewalk. They hear every word. God uses His Word to move people’s hearts and open ears. Usually within an hour, someone begins asking questions or chooses life.

We stay until the end. We have seen some literally “get off the table” and come out. God doesn’t work on our timetable.

TT: What is the most common misconception evangelical Christians have about men and women who procure abortions?

JB: That they don’t know what they’re doing. God has written His law on everyone’s heart. That’s why they’re so angry to find us here. Second Timothy 2:25–26 says, “In humility [correct] those who are in opposition, if God perhaps will grant them repentance so that they may know the truth, and that they may come to their senses and escape the snare of the devil, having been taken captive by him to do his will” (NKJV). People come in knowing what they’re doing, yet are spiritually blind, caught in a trap laid by the devil.

Baby sacrifice has been with us throughout history. There’s a demonic battle that has gone on since the days of Baal worship. Ephesians 6:12 says, “We do not wrestle against flesh and blood, but against principalities, against powers, against the rulers of the darkness of this age, against spiritual hosts of wickedness in heavenly places.” We come with the only answer to spiritual blindness: the gospel (Rom. 1:16). The Lord in His grace goes to the “gates of hell,” calling them to repentance. People respond to this almost every day.

JB: I’m blessed to be a member of Saint Andrew’s Chapel in Sanford, Fla., which has organized prayer support as well as Bible studies and groups that pray for the ministry at Orlando Women’s Center. All our pastors—R.C. Sproul, Burk Parsons, Don Bailey, and Kevin Struyk—preach against abortion, encouraging us to fight. They encourage us to get out on the street to love our neighbors and plead the cause of the widow and orphan. They even come to encourage us on the street. The students of Reformation Bible College are also encouraged to come. There’s not an hour that Orlando Women’s Center is open that a member of Saint Andrew’s isn’t there. When a woman chooses life, she’s turned over to a group of ladies from the church. They love and encourage her and see what her needs are. Sometimes a deacon is needed to see what kind of material needs there may be. We also have baby showers, etc. Many of the women live far from the church. We pick them up on Sunday mornings for worship. Saint Andrew’s serves them both physically and spiritually. We host a Bible study for those who have had an abortion and have come to Christ but wrestle with guilt.

Sadly, I think most churches don’t do anything. Francis Schaeffer said, “Every abortion clinic should have a sign in front stating, ‘Open by the permission of the church.’ ” If the church were to rise up with a united front, would there be any more abortions? Dr. James Pendergraft, the owner of the abortion clinic where I minister, said, “If it wasn’t for the evangelical church sending me their daughters, I’d be out of business.” Most people who come to kill their babies claim to be Christians. The church needs to repent of our apathy.

JB: First, the church needs to preach truth. Proverbs 6 says God hates the hands that shed innocent blood. It’s not a political theory of abortion that God hates. It’s the “hands,” the people involved in killing vulnerable babies. God is the author of life. God shows us that these little babies are precious gifts that He has a claim on. The church also has an obligation to serve the parents. If we want these babies to live, we must help with spiritual and tangible needs. Our deacons do the “nuts and bolts” work with those who need help—coming up with budgets, helping them to find services, and looking for jobs.

The church serves those who have had abortions by telling them the truth. If God has granted them repentance, they need to know that they’re forgiven, that 1 John 1:7 tells us the blood of Jesus Christ cleanses us of all sin, including the sin of abortion.

TT: What objections do you hear most often from men and women when you are trying to persuade them not to proceed with an abortion? How do you answer those objections?

JB: First, ” ‘Thou shall not judge’ and you are judging me.” I tell them I love them and am there not to judge but to warn and help them. The close second is, “This is my choice, my legal right.” I explain that God’s law prohibits the muder of babies, that just because something is legal under man’s law doesn’t make it right.

TT: Suppose a local church wants to do more to combat abortion and minister to those who are considering going through with an abortion. Where do you start?

JB: The first step would be to find out when they’re open. Go before the clinic opens, offering help when the women arrive. I use the “In the Womb” tracts and a flier from a local crisis pregnancy center. Every abortion mill is different logistically, so they would have to adapt. I have some friends who minister at a clinic where they have to be some distance away. God’s been good; they see fruit even under these conditions. The main thing is to let the women know you love and care about them. The rest will fall into place.

TT: Tell us about someone to whom you have recently ministered who has been changed by the gospel.

JB: Last week, a young lady named Jenny pulled in. I offered her some brochures. She rolled down her window, and I told her about this place and that we could help. She listened as I warned her about what God says about abortion and how He sent me to call her to trust Him. She trembled, saying, “I’m not doing this.” I called the others to pray with her. After that, she wanted to talk more, saying she’s a Christian who’d fallen into sin. Her mother is a believer, and she was afraid to tell her of her baby. I said she could have gone to other clinics in Orlando, but God sent her to this one so that she could hear Him say, “Trust Me.” She sobbed uncontrollably and said she’d woken up that morning praying that God would send someone to stop her. She and her boyfriend later went to True Life Choice and had an ultrasound. They saw their baby together, and God touched her boyfriend too.

She called later, still nervous about her mother. I put her in touch with a dear lady in the church who agreed to go with Jenny to tell her mother. Before she could get there, Jenny called, grateful for our prayers and saying she’d told her mother and that everything went well. On Sunday, Jenny and the girl’s mother came to Saint Andrew’s to worship. Her mother thanked me for saving her grandbaby. I reminded her that only Jesus has the power to save. There is nothing like this ministry.

John Barros is director of Who Will Stand, a ministry dedicated to giving a voice to unborn children in Orlando, Fla. Each week, more than one hundred babies are killed at the Orlando Women’s Center. Every morning, Mr. Barros offers truth and love to abortion-bound mothers and fathers. He and his team pray, preach, and offer alternatives to the patients of OWC, including free sonograms, medical care, and safe housing. Members of the Presbyterian Evangelistic Fellowship (PEF), Mr. Barros and his wife, Vicki, have been involved in full-time sidewalk ministry outside the abortion clinic since 2010. In addition, Mr. Barros is a chaplain at the 33rd Street jail in Orlando.