An Eternal Perspective: An Interview with Randy Alcorn

Tabletalk: How did you become a Christian, and how did you receive the call to ministry? 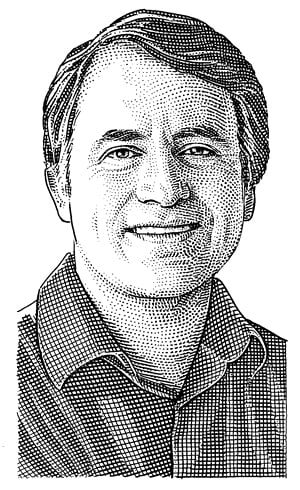 Randy Alcorn: I grew up without Christ and without the church. When I was in high school, I attended a church to see a girl I’d met. But God can use even our wrong motives for his right purposes. (In fact, that girl became my wife years later.) After a few months of attending, I was reading the Bible regularly. One day I realized I believed what it said about Jesus. I dropped to my knees, confessed my sins, and gave my life to Christ. I have never once regretted it.

By the time I’d known the Lord two years, I knew I wanted to go to Bible college and seminary to study God’s Word. At first, I wanted to be a missionary, but then we started a church that I was asked to help pastor. I was a pastor until 1990, and I’m still part of the same church. I love it and I’m grateful.

TT: Please describe the events that led to your earning only minimum wage and giving away 100 percent of your book royalties.

RA: In 1990 I was a pastor of a large church. I was also on the board of a crisis pregnancy center, and we’d opened our home to a pregnant teenager and helped place her child for adoption. My burden for the unborn grew, and I participated in peaceful, nonviolent rescues at abortion clinics. For this I was arrested and sent to jail. An abortion clinic won a court judgment against a group of us, and I discovered that my church was about to receive a writ of garnishment for my wages. To prevent the church from either having to pay the clinic or defy a court order, I resigned.

I’d already divested myself of book royalties. Fortunately, our family had been living on only a portion of my church salary, and we’d just made our final house payment. Another court judgment followed, involving another abortion clinic. They were awarded the largest judgment ever against a group of peaceful protestors: $8.2 million.

By all appearances our lives had taken a devastating turn, but it was one of the best things that ever happened to us. What they intended for evil, God intended for good. We began a nonprofit organization, Eternal Perspective Ministries (EPM). The only way I could avoid garnishment was to make no more than minimum wage. (I was also given some modest benefits, and my wife made a part-time secretary’s salary.) Royalties from my books go directly to EPM, which gives 100 percent of them to worthy Christian organizations as well as to help facilitate the giving away of my books to people all over the world. By God’s grace, we’ve given away more than $6 million to date.

TT: Given your experience suffering the legal consequences for protesting abortion, can you give us some advice on dealing with a culture that is increasingly hostile to Christianity?

RA: Jesus said, “‘A servant is not greater than his master.’ If they persecuted me, they will also persecute you” (John 15:20). Followers of Jesus should expect injustice and misrepresentation.

I’m grateful that there are organizations working to protect the rights of Christians. But I’m concerned that we shouldn’t view ourselves as one more special interest group, clinging to entitlements and whining when people don’t like us. God’s people have a long history of not being liked.

The fact is, while the gospel is good news, it is also insulting. Many people don’t like being called sinners and told they deserve to go to hell. Peter said, “Don’t be surprised at the fiery trial when it comes upon you to test you, as though something strange were happening to you” (1 Peter 4:12).

If our eyes are on anyone but Jesus, we’re not going to have the stamina to put up with criticism or outright hostility. Paul said, “If I were still trying to please man, I would not be a servant of Christ” (Gal. 1:10). Jesus is the Audience of One. We will stand before his judgment seat, no one else’s. We should long to hear him say, “Well done, good and faithful servant.” What other people think won’t matter.

TT: What are two or three simple, practical ways that Christians can combat abortion in the course of their “ordinary” day-to-day lives?

RA: First, pray regularly for pro-life ministries, churches, mothers, and babies. If the darkness of child-killing is to be overcome, it will require spiritual warfare, fought with humble and persistent prayer (Eph. 6:10–20).

Second, we can all give regular visibility to the issue of abortion in conversations and in places such as blogs and social media. Scripture says to speak up for those who cannot speak up for themselves (Prov. 31:8–9). It’s vitally important that we approach subjects such as abortion in a Christlike manner, full of grace and truth (see John 1:14).

Third, spearhead a pro-life ministry in your church, or find one in your area (visit www.care-net.org) and consider donating time, money, equipment, clothes, and professional skills.

TT: Aside from the lawsuit, has there been a defining moment in your ministry?

RA: As a young pastor, my mom was dying, and every day I would read to her the last two chapters of Revelation. Though I never heard it spoken about in my Bible college or seminary, I found compelling this picture of a resurrected world where people with real bodies will live in a redeemed culture forever centered on Christ. I began to look forward to seeing again in the new world my mother and my friends who had died. That was thirty years ago, and I have studied and written about heaven and the importance of an eternal perspective ever since.

TT: You write both fiction and non-fiction. What are the unique challenges in writing for each genre?

For me, the toughest part about being a writer is working on the big books, the ones that take a couple of years, such as Money, Possessions & Eternity and If God Is Good. In writing my book Heaven, I had some very discouraging times where I stayed up half the night working and asked, “Lord, is this going to make a difference?” It’s something you have to accept by faith, trusting that a measurable result will come. Every time somebody writes to say their life was changed reading that book, I thank God for empowering me to persevere.

When it comes to writing fiction, there’s a big debate about the degree to which explicitly spiritual content can be part of the story. Spiritual searching and matters of faith are a very real part of many people’s lives, and when they’re not, they should be. So, while sermons don’t work in novels, spiritual realities can be artfully woven into a credible storyline. But you have to earn the right by doing it skillfully.

TT: What authors and works would you read and re-read if you had a six-month sabbatical dedicated to nothing but reading? Why?

RA: A.W. Tozer’s The Knowledge of the Holy, C.S. Lewis’ Mere Christianity, Francis Schaeffer’s He is There and He is Not Silent, John Piper’s Desiring God, Jerry Bridges’ The Joy of Fearing God, and Wayne Grudem’s Systematic Theology, plus the full set of Spurgeon’s sermons. These are all books that have had a profound influence on my life.

TT: One focus of your ministry has been to encourage Christians to live with their hearts set on heaven. How can Christians develop this eternal perspective on their lives in the here and now?

RA: Many people imagine that we will remain disembodied spirits in the afterlife and that heaven won’t be a tangible, earthly place. They mistake the intermediate heaven, where we go when we die, for the eternal heaven, where we’ll live with Christ and each other as resurrected beings on a resurrected earth.

Often our ideas of heaven are based more on Platonism and Eastern mysticism than biblical Christianity, which is centered in the anticipation of God’s ultimate redemptive purpose—resurrected people living on a resurrected earth with the resurrected Jesus. There are Christians who would die rather than deny the resurrection, but they don’t understand what it means.

TT: Is it possible for Christians to be “so heavenly minded that they are no earthly good”? Why or why not?

RA: Many of us are so earthly minded we are of no heavenly or earthly good. As C.S. Lewis observed, “If you read history you will find that the Christians who did most for the present world were just those who thought most of the next. … It is since Christians have largely ceased to think of the other world that they have become so ineffective in this. Aim at Heaven and you will get earth ‘thrown in’: aim at earth and you will get neither.”

Randy Alcorn is a New York Times bestselling author and the founder and director of Eternal Perspective Ministries. His ministry focus is on helping others use their time, money, possessions, and opportunities in ways that count for eternity. He had previously served as a pastor for fourteen years. Alcorn has written more than forty books, including Heaven, The Treasure Principle, and Safely Home.