Defending the Faith in the United Kingdom: An Interview with John Blanchard

Tabletalk: What were the circumstances surrounding your conversion to Christ, and how did you become a Christian? 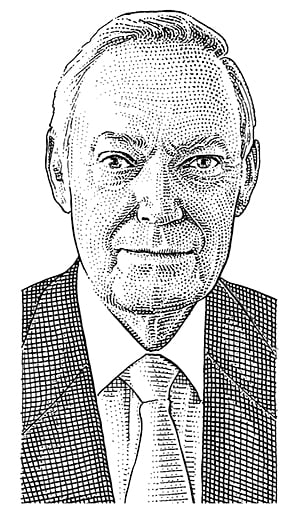 John Blanchard: Returning to my native Channel Island of Guernsey at the end of World War II, following my evacuation to the Hebrides, off the west coast of Scotland, I soon became a card-carrying religious hypocrite. At my newly acquired stepmother’s invitation, I joined Holy Trinity Church and got involved not only in its regular services, but in the choir, the Sunday school and the Young People’s Fellowship, of which I became leader.

After leaving school in 1948, I joined the Guernsey Civil Service and was eventually transferred to the staff of the Law Officers of the Crown. It was there that I met a lovely young lady, who in October 1954 invited me to an evangelistic campaign led by the American evangelist Paul Cantelon. I tried everything I knew to avoid accepting, but the offer to join her proved irresistible. On the first night, I found the program disturbingly different from familiar Church of England services, but God’s Word swept away my prejudices and concerns, and a few nights later God graciously replaced my religion and feelings with repentance and faith, and drew me to trust the Lord Jesus Christ as my Savior. (Three years later, I married the young lady.)

TT: How did you get involved with Christian apologetics?

JB: In 1962, my young family and I left Guernsey for England, where I became an evangelist on the staff of the National Young Life Campaign. Later, I joined the Movement for World Evangelization, and in 1980, I cofounded the organization Christian Ministries. Some twenty years later, when my ministry had broadened to include Bible teaching and conference ministry, I began to realize that in its ongoing evangelism, the church in the United Kingdom was virtually neglecting robust Christian apologetics, while atheism and agnosticism were rapidly gaining ground. I began to speak frequently on “the problems of being an atheist,” and in 1980 I wrote Does God Believe in Atheists?, which traced the roots and rise of atheism, pinpointed the fallacies in atheistic thinking, and presented the case for biblical theism and the Christian faith. To my surprise, it became an instant best seller and was named the U.K.’s Christian Book of the Year.

TT: How did you come to develop the popular Christian Apologetics project, and what are its goals?

JB: I began by speaking on “Does God Believe in Atheists?” in every county in the United Kingdom, and then I began to release DVDs and CDs covering various of its themes. Since then, I have authored another fteen evangelistic titles, each addressing questions unbelievers ask and pointing them to Christ. Along with Ultimate Questions, which was first published in 1987, these have some eighteen million copies in print in more than sixty languages. I also conduct Popular Christian Apologetics tours, largely in the U.K., and in hundreds of events I have tackled subjects chosen by inviting churches. The goals of the project are perfectly straightforward: to challenge unbelievers and to equip Christians to evangelize.

TT: What are the three most important things Christians can do to prepare themselves to defend the Christian faith?

JB: First, deepen their relationship with the Lord, so that their personal evangelism is the natural outcome of spiritual income. When Peter and John were hauled before the Sanhedrin, they were rated “uneducated, common men,” but the clarity and boldness of their testimony was put down to the fact that “they had been with Jesus” (Acts 4:13). Second, master the Bible’s major doctrines. Get a grasp of the big picture and let this be the canvas on which everything else is painted. This begins with God’s aseity (His uncaused self-existence and independence) and includes His absolute sovereignty, in the exercise of which He “works all things according to the counsel of his will” (Eph. 1:11). Third, be alert to current cultural thinking and determine how best to counter it with biblical truth. In all of this, 1 Peter 3:15 is a good template.

TT: What is the most common objection to the Christian faith you hear from atheists, and how do you answer it?

JB: The theory of evolution, and science in general, have often been thrown at me as reasons for rejecting the Christian faith, and one must develop ways of dealing with these. It can easily be shown that evolutionary ideas have no explanation for human dignity, rationality, or morality, while science’s limitations can be pinpointed just as easily. For example, Richard Dawkins’ claim that “truth means scientific truth” is not even a scientific statement. On its own terms, it can’t be true; it is no more than a silly sound bite.

Yet the most common objection to the Christian faith is usually framed in the question, “Where is God when things go wrong?” On Popular Christian Apologetics tours, I am asked to speak on this subject more often than on all the other options combined. People are puzzled, skeptical, or simply angry that a sovereign, loving God could allow atrocities, wickedness, injustice, and hideous evil to take place on His watch. It is impossible in a few sentences even to summarize how I answer these concerns, but I often begin by positing the case if there were no God. This would reduce 9/11 to a spectacular, noisy, colorful rearrangement of atoms of molecules; it would turn solemn services of mourning for national tragedies into pointless pantomimes; it would make it futile for anyone who is suffering from physical, mental, or psychological pain, or trauma of any kind to seek supernatural help.

Most people have never thought this through, and when I sense that this is the case, I point them to a loving Creator, the violation of whose law is the root cause (though obviously not always the immediate cause) of all suffering. The next steps (though there is no rigid formula here) are to show from Scripture the immeasurable depth of God’s love, His amazing grace, the staggering sacrifice of His Son in the place of sinners, and His willingness to rescue us from our sins and to have us live with Him forever in the new heavens and the new earth (Rev. 21:4).

TT: What is the most significant apologetics issue of our day, and why?

JB: The 2001 Census for England and Wales revealed that 72 percent of the population identified themselves as Christian, but ten years later, this figure had dropped to 59 percent, while during the same time the proportion of those claiming no religion jumped from 15 percent to 25 percent. We can assume that “Christian” can be interpreted very loosely, but so can “no religion.” Both hide the fact that we live in an age permeated by religious pluralism. Even if we set atheists aside, huge swaths of people reject “God talk” as prejudiced radicalism and reduce quotations from the Bible as carrying no more authority than those from other religious books. Religious pluralism has inevitably spawned rampant relativism, which even claims that truth itself has been ripped from its roots. Yet archatheist Richard Dawkins’ statement that “all truth is relative” is a claim to absolute truth, so on its own terms it is false.

This points to the question of ultimate authority as the most significant apologetics issue of our day. The Christian apologist needs to face this head on. B.B. Warfield claimed, “If God be a person, it follows by stringent necessity that he can be known only as far as he reveals or expresses himself.” The Christian apologist must convey with conviction and clarity that He has done so.

TT: How can the church best prepare young people to proclaim and defend the gospel?

JB: The best preparation is to do everything possible to help them “grow in the grace and knowledge of our Lord and Savior Jesus Christ” (2 Peter 3:18). Courses designed to deepen their understanding of themes directly related to apologetics have their place, but there is no substitute for falling ever more deeply in love with Jesus. As someone the Lord has graciously (and very recently) led into a late-in-life marriage to a wonderful Christian lady, I can assure you that a training course is not necessary for me to tell others about her—only hearers are needed. The same is true of the gospel.

TT: What is the greatest apologetic for the Christian faith, and why?

JB: When I am asked which of my books I would like to outlast all the others, my reply is always the same: Meet the Real Jesus. This is because every other book ends by unveiling Him and confronting readers with His identity, work, and claims. It has been said that while apologetics can get people from A to Y, only the gospel can get them from Y to Z. I understand what this is saying, but I would prefer to go one step further and say that the Lord Jesus Christ, in all the glory of His deity, birth, life, death, resurrection, return, and everlasting reign, is the ultimate apologetic.

John Blanchard is an internationally known apologist and teacher. Dr. Blanchard is the director of Popular Christian Apologetics, a project committed to defending the Christian faith through broadcasting, writing, and teaching resources. His book Does God Believe in Atheists? was published in 2000 and voted “Best Christian Book” in the 2001 U.K. Christian Book Awards. He has written more than thirty books, including Right with God, Ultimate Questions, and Truth for Life. In addition, he is on the board of governors of Highland Theological College in Scotland and is a trustee and life vice president of Young Life.