In Awe of God’s Glory: An Interview with Joel Beeke

Tabletalk: At what age did you first hear God’s call to ministry, and how did you receive confirmation of this call? 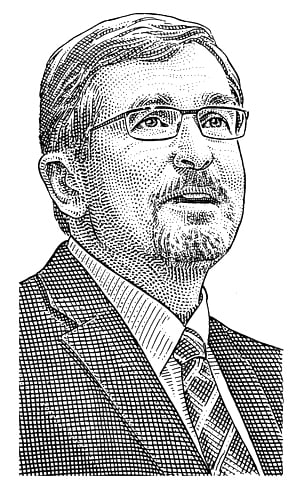 God began to strive with my soul when I was age fourteen. I was brought to spiritual liberty in Christ when I was fifteen. And I was irresistibly and powerfully called to the ministry when I was sixteen. Being quite shy when I was young, and belonging to a denomination where the next youngest minister was nearly fifty years old, I never would have considered the possibility of ministry had I not been powerfully called. My initial call to the ministry came when I was working for my father pulling weeds on a lawn of one of his clients. “Go forth and preach the gospel to all nations, yea, even unto the sons of men” resounded in my soul with incredible power. From that day forward, the ministerial call, daunting though it was, was bound upon my soul, and forty-five years later, I have never been able to free myself of it. Rather, God has confirmed it over the years in numerous ways.

TT: What were the reasons for establishing Puritan Reformed Theological Seminary, and what sets it apart from other seminaries?

JB: PRTS began in 1995 to train ministerial students to serve Heritage Reformed congregations. In 1998, the Free Reformed Churches of North America chose PRTS to train their ministers as well. Today the seminary trains students from Reformed, Presbyterian, and Baptist backgrounds from dozens of countries and denominations all over the world. Our curriculum emphasizes the biblical, doctrinal, experiential, and practical dimensions of Christian life and ministry. Like several other good schools, we are committed to the Reformed confessions (both the Three Forms of Unity and the Westminster Standards), but we have a special emphasis on Reformed experiential preaching and heartfelt piety. We train our students to preach to the whole man: head, heart, and hands. Such preaching applies the doctrine of salvation to the heart to distinguish between the experience of the converted and unconverted, and to cultivate a view of the Christian life that is idealistic, realistic, and full of hope and action.

TT: What does your family worship look like on a typical day?

JB: We do family worship in conjunction with our evening meal. Before eating, I open with an extended prayer. After the meal, we move into the living room, where we first read Scripture. I assign to each family member how many verses to read. Generally, we read straight through the Bible, believing, as J.C. Ryle said, that only a whole Bible will make a whole Christian. I then instruct my family from the portion of Scripture read, usually providing three or four doctrinal and practical lessons from it. I often try to bring in subject matter from recent sermons, providential events, or personal experiences to make this particular Scripture come alive and be practical for contemporary lessons. Sometimes I ask each child a question or two during my instruction, which often generates discussion. Each family member then takes turns offering the closing prayer, after which we sing a psalm or hymn.

TT: How would you counsel godly parents who are distraught because their adult child seems to have rejected the faith even though he or she was raised in the fear and admonition of the Lord?

JB: If we were meeting together, I would begin with prayer and ask many questions. It often helps for parents to consider the following: (1) Find comfort in the Father’s love for you and acceptance of you. Remember, you are justified by Christ’s righteousness, not by the results of your parenting. (2) Keep walking with God so that your life will testify to your child of Christ’s righteousness. Be faithful to use the means of grace, and encourage your child to do the same. (3) Examine yourself and confess your sins; that includes confessing to your children how you sinned against them. Take responsibility for your actions and recognize that they are responsible for their actions. (4) Trust God’s covenant faithfulness. Remember that God, whose promises fail not, can answer your prayers long after you are dead, just as He answered Hezekiah’s prayers for his son Manasseh fifteen years after Hezekiah died. (5) Learn to rejoice in God’s glory, and realize that God alone has the right to elect whom He wills and the power to save whom He pleases. The best way to love your children is to love God’s glory more than you love them. Rejoicing in His sovereignty will give you hope, for with God all things are possible.

TT: What new projects are in the works at Reformation Heritage Books (RHB)?

JB: We are working on three massive projects right now at RHB. The first is a KJV study Bible, projected for print in 2015. It will be the first KJV study Bible that is thoroughly Reformed and helpful for fathers in leading family worship. The second project is the complete works of William Perkins, one of the fathers of Puritanism, in ten volumes. His works have not been printed since the early seventeenth century. The third project, in conjunction with the Dutch Reformed Translation Society, is the translation into English of Petrus VanMastricht’s extensive Reformed theology, which explores each point from biblical, doctrinal, polemical, and practical perspectives. Jonathan Edwards said it was the best thing ever written besides the Bible.

TT: Why should twenty-first century Christians read the Puritans?

JB: The Holy Spirit revived the church in the Reformation and Puritan era, filling jars of clay (men such as Martin Luther, John Calvin, William Perkins, John Owen, John Bunyan, and Jonathan Edwards) with treasures of spiritual gold. God illuminated the Reformers to rediscover fundamental biblical truths about salvation and worship. The Puritans wedded vibrant spirituality to a rich, Bible-based theology. Reading their writings moves your soul with awe at God’s glory, builds up your mind with faith in the truths of Scripture, ignites your heart with love for Christ the all-sufficient Savior, and expands your life out of its shrunken puddle of selfishness to expect great things from God and to attempt great things for God. In other words, the Puritans give us fuel for worship and missions.

TT: What are the three most common misconceptions regarding the Puritans, and how would you answer them?

Misconception No. 2: The Puritans were witch-hunters. Reality: from 1692 to 1693 the courts in Massachusetts killed two dozen men and women accused of witchcraft. However, many Puritan ministers wrote against the methods of the witch trials and stopped them. Comparatively, from 1626–1631 several hundred people were executed for witchcraft in Bamburg, Germany.

Misconception No. 3: The Puritans were prudes. Reality: The Puritans forbade sexual activity outside of marriage, yet they cherished sex between husband and wife, and cultivated personal friendship and marital romance.

TT: You have written much on the subject of assurance. Why was this doctrine so important to the Reformers and Puritans, and why does it remain important today?

JB: Assurance of faith is the conviction that one belongs to Christ through faith, possesses saving grace, and will ultimately enjoy everlasting salvation. Roman Catholicism taught that assurance was arrogant and would promote carnal living. The Reformers and Puritans came to see that assurance was critical to experience fullness of peace; to avoid the ditch of “easy believism” on the one hand and of “hard believism” on the other; to energize the Christian for service for God’s glory; to promote holiness among the assured children of God; and to enrich our communion with God. The same apply today. How can a believer walk closely with God while fearing that God is angry with him?

TT: How can Christians grow in their assurance of their own salvation?

JB: (1) Increasingly rest by faith in the promises of God in Christ Jesus for salvation. (2) Diligently and prayerfully use the spiritual disciplines God has provided us to grow, such as Scripture reading, preaching, meditating, praying, reading sound literature, communing with the saints, serving the church, and evangelizing. (3) Persist in high levels of obedience in fearing God by esteeming His smiles and frowns more highly than the frowns and smiles of people. (4) Observe with praise and thanksgiving the Spirit’s work in the fruits and marks of grace worked in the soul. (5) Meditate often on God’s character and faithful track record toward us.

Joel R. Beeke is president and professor of systematic theology and homiletics at Puritan Reformed Theological Seminary in Grand Rapids, Mich., where he is also pastor of the Heritage Netherlands Reformed Congregation. He is editor of Banner of Sovereign Grace Truth and editorial director of Reformation Heritage Books, and he has written, coauthored, or edited numerous works including A Puritan Theology, Prepared for Grace, and Parenting by God’s Promises.