Why I Am Not an Arminian 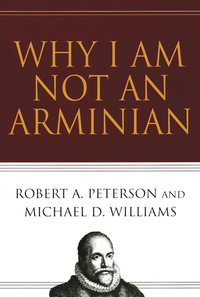 When Dutch Calvinists and Arminians squared off against one another in the early part of the seventeenth century, the Calvinists won the opening battle. The controversy, however, soon spread beyond the borders of the Netherlands. Now, four hundred years later, the conflict continues, and in terms of numbers alone, Arminianism is clearly winning the war for the hearts and minds of professing Christians. Today, Calvinists are a small minority. But why the debate in the first place? Is it really that important?

Many professing Christians today would say that the debate between Calvinism and Arminianism should be put to rest, that we have more important things to think about. Robert A. Peterson and Michael D. Williams disagree. In their book, Why I Am Not an Arminian (IVP, 2004), these two authors not only explain what Arminianism is, they demonstrate how it is biblically, theologically, and philosophically unsound and why it must be rejected by those concerned to be faithful to the teaching of Scripture.

Peterson and Williams begin by providing some historical context to the debate. They look first at the fourth-century debate between Augustine and Pelagius over the nature of sin. The importance of our understanding of this doctrine can hardly be overstated, because what a person understands about sin will inevitably affect his understanding of grace and redemption. The authors show that Pelagius’ underestimation of the power of sin and his overestimation of the power of human ability destroys the Gospel.

Two topics that have been debated from the fourth century on are predestination and perseverance, and Robertson and Williams devote the next two chapters to an examination of each. Generally speaking, Arminians teach that election to salvation is conditioned upon foreseen faith. Calvinists, on the other hand, believe that the Scriptures teach unconditional election, namely, that election is based on God’s sovereign will. Arminians also reject what Calvinists refer to as the “perseverance of the saints.” According to Arminian theology, true Christians can and do apostatize from the faith. Peterson and Williams devote considerable space to showing why the Arminian doctrines are false and to demonstrating the biblical foundation of the Calvinist doctrines.

In chapter 5, the authors provide a historical and theological overview of the Calvinist–Arminian controversy that led to the Synod of Dort in 1618–19. In the remaining four chapters, Peterson and Williams compare Calvinist and Arminian teaching on four crucial topics. They look first at the different views of human freedom. Arminianism generally teaches that human freedom and divine sovereignty are logically incompatible. Calvinists, on the other hand, argue that human freedom and divine sovereignty are compatible because the Bible affirms both. The final three chapters examine the differences between Calvinists and Arminians on the subjects of depravity, grace, and the atonement. In each case, Peterson and Williams set forth the biblical case for the Calvinist position. They argue that the Bible clearly teaches total depravity, irresistible grace, and substitutionary atonement.

Unlike many books on the subject (from both sides), Peterson and Williams counter the claims of Arminians with both clarity and charity. They do not understate serious differences, but they take particular care to make sure the views of those with whom they differ are presented accurately. This is important because critiquing views that are held by no one in order to score debating points with those who do not know any better is both dishonest and a waste of time.

Peterson and Williams’ book is important because the issues involved are important. The issues at the heart of the Calvinist–Arminian controversy are intimately related to the Gospel. The controversy deals with the nature of God’s sovereignty and human free will, the impact of sin upon human beings, the meaning of the atonement, the definition and power of God’s grace, the possibility of assurance, and much more. Clearly, such doctrines lie at the heart of the Christian faith.

The Calvinist–Arminian debate is not a debate that Christians can afford to ignore. It is vitally important. If you have been a Christian for any amount of time, you likely know people who are Arminian or who have been influenced by Arminian teaching. It is important to be ready to give an answer when challenged by such teaching. For those who want to be ready, Why I Am Not an Arminian is a good place to start.