The Way of the (Modern) World

We have given our hearts away, a sordid boon!

For this, for every thing, we are out of tune;
It moves us not.—Great God! I’d rather be
A Pagan suckled in a creed outworn;
So might I, standing on this pleasant lea,
Have glimpses that would make me less forlorn; 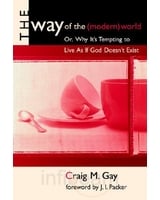 Christian history from the second-century onward teems with stories of church-men who have resisted the slithering wiles of the world to some degree. From Justin Martyr’s defense against paganism’s pseudo-morality, Tertullian’s repudiation of Gnosticism, the four great ecumenical councils’ affirmations of orthodox Christian doctrine, to Saint Augustine’s debates with Pelagius, Saint Aquinas’ opposition to Muslim relativists, and the Reformation’s recovery of Augustinian soteriology—all of these serve to remind us that the catholic Church has never been afraid of a fight. Where, then, is the battle today? And once the battle lines are drawn, how ought the Church resist the attack?

Craig M. Gay, in The Way of the (Modern) World, or, Why It’s Tempting to Live As If God Doesn’t Exist, offers a profound and provocative analysis of our current situation by focusing on what lies beneath the surface of modern American society. He uncovers something dreadful. Gay shows time and again how the unmitigated embracing of modern institutions by the Church has rendered the gospel implausible to its hearers, as faith and prayer are constantly eclipsed by practical efficacy of expertise and technique (Gay, 3). By exposing the atheistic elements inherent within American institutions such as politics, science and technology, modern economy, and our own collective personality-rampant narcissism-Gay shows how each of these are worldly by definition, anti-teleological by nature. Our disdain of purpose then leads us to incessantly strive to create meaning for ourselves through political aspirations, science and technology, etc. Creation is thereby reduced to an object for us to control, an object that we use solely to create our own purpose and meaning (See Martin Buber’s “I-it” conjunction in Gay, The Way of the (Modern) World …, 296-301.). The world becomes a human construction that attempts to blot-out the sovereignty and lordship of Christ. In short, this “practical atheism” inherent within modern culture asserts that humans do not need God, that he is “largely irrelevant to the real business of life” (2). However, this “practical atheism” does not preclude religious understanding, rather, “it simply requires that the object of religious understanding be subject to more or less ‘natural’ regularities” (7). That is, we want a religion we can command. By maintaining this controlled construction over reality, we not only render the existence of God irrelevant, we neutralize “the possibility of having any real encounter with the living God” (7), and it is this deliberate constriction that prevents us from seeing the plausibility of the gospel.

Simply put, this book is for those willing to take a critical look at their own actions, how they relate to the Church, and whether they reinforce or combat practical atheism. While Gay’s frightening exposure of the Church’s thoughtless consumption of modern remedies could send the reader into a seemingly irreparable quandary, he honestly wrestles with the problem in order to offer a valid solution: a theology of personhood. That is, to approach all of our relationships (with the world, people, and most importantly, God) in terms of “I-Thou” (as opposed to “I-it”). The only way there, Gay argues, is through the recapturing and reapplying of historic Trinitarian orthodoxy (284-296).

In the first four chapters, Gay outlines and analyzes the modern institutions that are inherently secular and worldly (mentioned above), and offers glimpses of this “theology of personhood” at the end of each section before focusing on it directly in the last chapter of the book. Regarding the four inherently secular American institutions:

— We must place human aspirations (protecting and preserving lives) over and against those of immanent political-social change. Christian hope ought to be a political virtue (73ff).

— In regard to technology and science, we must “give an account of nature that does not deny the validity of scientific inquiry, and yet does not so stress the autonomy of the created order that it tempts us to believe that science can reveal the meaning of nature and of our own lives” (126). In other words, we Christians must neither wholly disdain rational and empirical inquiry, nor must we assume that science can be used in an unbiased way. The paradox of “contingency” must be affirmed and proudly maintained in the face of rational-technical determinism. Creation is both independent of (contra pantheism) and utterly dependent on God (124-129; cf. 272-281). That is, God is sure; all else is subject to change.

— We must reject the logic of the modern economy, which reduces all things to objects of monetary value, and rediscover the Protestant work ethic of vocation as “calling.” That is, whatsoever we do, do heartily, as to the Lord and not to man (Col. 3:23). It means acting “ethically and substantively within the system no matter how impractical we may occasionally appear in doing so” (175).

— In combating narcissism, or the “worldly self” (181), we must leave-off the notion of ever being fully satisfied with both consumption and therapy (or any earthly kingdom for that matter), and be filled with a Christian self-consciousness in which “love for God and neighbor is progressively realized and deepened” (232). The need to rediscover the self before God (coram Deo) as opposed to the self simply submerged in mass society and culture has never been greater. Therapeutic consumption, like any other drug, requires more of us every time we use it, until our ravenous gluttony results in self-satisfaction at any cost. Instead of finding our identity in the glory of the lordship of Christ, we settle for defining the self in terms of individual rights and needs.

The main hope in summarizing up to this point has been to inform the reader where practical atheism threatens the Church and what must be done to resist it. This is not a book of prescriptive solutions, it is a book that provides (I believe) explicitly Christian tools with which we can resist the inherent secularity of (post)modernity. What follows is an attempt to apply these tools. I reiterate, this is my attempt. Disagree at your leisure.

If there is one thing that lends itself to promoting practical, or “functional,” atheism in our churches today, it is running a church like a business—with its (the administration’s) maintaining control the ultimate objective. This fails to treat people as real individuals, instead of members whose everyday needs are secondary to the status-quo of the organization. This has the unintended consequence of relegating the living God to an afterthought, thus breeding a dead faith that shares no identity, no union with the person of Christ. Maybe we have warped the doctrine of common grace so much so that it has become disassociated from the active, loving hand of God, and turned it into a wholly transcendent winding of the clock. When a church assumes control of its mission, and attempts to define itself in worldly terms (to get the ‘seekers’ there or what have you), it effectively eradicates the radical immanence of the Creator’s touch.

How can the Church reverse or resist this plague? Churches need to revitalize the parish mentality, and that has ramifications as to how large it can become. If a good number of parishioners travel from the same area to church, why not call (not on the phone, of course) a minister and start a fledgling congregation in their own neighborhood? Churches must recapture their confessions. It allows them to play within the grand playground of Christian orthodoxy, and confess as the Bride of Christ that he is her head, and that she serves him first in all things—and that means loving neighbors unconditionally and actively Monday through Saturday. Churches need to boldly proclaim the exclusivity of the gospel. Today, the self is worshipped coram Deo. But there is no other god before the Almighty. A much-needed re-assessment of natural human capabilities escapes the pulpit. Far too much trust is placed in our own work week after week in self-centered sermons.

I conclude with Gay’s four suggestions that provide a good starting point in resisting secularity (260f.): 1) When the gospel falls on deaf ears, do not presumptuously think that the method of delivery should change. Rather, expect the challenge, since the modern world has become inoculated by the immanentization of Christian truth. Gay makes the important point that today does not parallel classical antiquity, and so we should not expect to re-duplicate the Church’s transformation of that particular culture (i.e., the holy Roman Empire). 2) We cannot and should not expect to resist the secularity of modernity and culture through mere withdrawal. 3) Our protests against modernity should be leveled against therapeutic sensibilities and the modern will-to-self definition. 4) Our criticism and resistance to modernity must be genuinely theological, quite possibly by “returning again to the careful study and respectful following of the central tradition of classical [Patristic] Christian exegesis.” (Thomas C. Oden, After Modernity What? Agenda for Theology (Grand Rapids: Zondervan, 1990), 34, as quoted in Gay, 266, footnote 41). That is, explicit Trinitarian theology.

At the root of these suggestions comes a remedy that only comes by the grace of God, the ultimate resistance fighter against functional atheism. In Gay’s own words, we “need a fundamentally new disposition of heart, a disposition able to direct our otherwise ‘natural’ abilities toward the works of love and holiness” (270). But we cannot manage this renewal all by ourselves. “We must begin by confessing that we [are called] into a personal relation with each other and with God by God himself, and that our response to this call—which is itself a gift of grace—must be to surrender ourselves to God and to our neighbor in love” (303). We further need to constantly remind ourselves that we need not look for more effective techniques, better education (though in some circles this might be an improvement), more information, or better theoretical constructions (269). And finally, we must admit “that we are simply not able to work this change within our own hearts… . For our cultural prognosis to be truly Christian, then, top priority must always be given to the conversion of souls. There is simply no other way of overcoming our natural inabilities and of arriving at a true assessment of our situation before God” (270). We have lost heart, no longer really believing that “God is willing, and perhaps even that he is able, to deliver us” (313). Until we get our hearts back after thoughtlessly giving them away to the world, Christian hope is but an empty aspiration leaning on a lifeless arm.