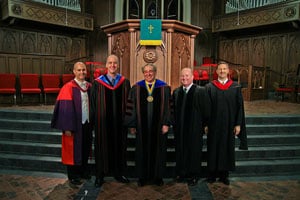 Sunday evening, October 16, 2011, at Saint Andrew’s in Sanford Florida will be remembered as a very special evening in the history of Reformation Bible College. Founded by R.C. Sproul, the college held its inaugural convocation installing Dr. Sproul as president.

Guests began arriving early afternoon for an open house for potential students, families and friends to tour the buildings and the campus.

The evening began with inspiring music by Reginald Lyle, playing the beautiful prelude of Highland Cathedral on the bagpipes, followed by the processional hymn, A Mighty Fortress, and ultimately concluding with the hymn, All Hail the Power of Jesus’ Name. 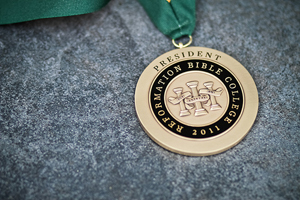 Honored guests in attendance included the students from the Class of 2011, their families, and many friends and supporters of Reformation Bible College. The sermon “The College with No Alumni” was delivered by Dr. Sproul’s long-time friend Rev. John Sartelle, who also administered the Vow to the President, followed by prayer and the presentation of the Presidential Medallion. Dr. Sproul’s first act as president was to administer the faculty vow to Dr. Steve Adamson, Dr. Keith Mathison, Dr. Michael Morales, and Dr. R.C. Sproul Jr.. Prayers of dedication were offered for the faculty, staff, students, and the academic year.

Reverend Sartelle read from Psalm 19: 1-10 of the poet of Israel’s description of two great resources in which God reveals Himself. The poet wrote that God’s creation declares God’s wondrous character in every language, and to every person.  Then he described a book of laws, testimonies, and precepts – a book that further reveals God and brings indescribable blessings to mankind as he lives in God’s creation, by God’s Word.

He further explained that Reformation Bible College is focused on two great sources of revelation, and there are three theological truths that make up the larger context to its excellent and noble purposes.

First, the earth is God’s creation given to man. It is God’s special revelation. Consider the first words of the book of Genesis, “In the beginning, God created the heavens and the earth” (Genesis 1:1). Second, God reveals Himself in His creation. Just as the work of the artist, the painting reveals something of the artist, so God’s handiwork, His creation, reveals something of Him. “The heavens declare the glory of God, and the sky above proclaims his handiwork” (Psalm 19:1). The Psalmist could not help but see God in creation. Third, God is redeeming His creation. Man rebelled against the Creator effecting all of creation. That day man died spiritually. But from that garden, God began to speak of a Redeemer. 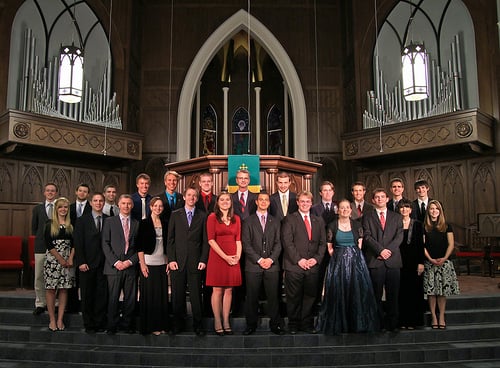 A joyous reception ended the evening. Thank you to all who have joined us in prayerful support and eager anticipation culminating in the realization of this dream. May God be pleased to advance His kingdom through the lives and vocations of these students wherever He takes them.