R.C. Sproul on Luther & the Reformation (Plus a Free Audiobook Download)

On October 31, 1517, Martin Luther tacked up 95 theses on the church door at Wittenberg. With this act, he hoped to provoke a discussion among the scholars about the abuses of the indulgences by the Roman Catholic Church. He was not trying to create a public furor by any means, but within a fortnight, these theses had spread through the country like wildfire. The last thing Luther had in mind was to start some kind of major controversy, but nevertheless major controversy did begin.

From the discussions at Wittenberg, the disputations began to accelerate and escalate. Copies of the theses reached Rome and critical meetings were scheduled with the young monk. In these debates, Luther was maneuvered into proclaiming publicly that he had questions about the infallibility of church councils and also that he thought that it was possible that the pope could err. In 1520 a papal encyclical was issued which condemned Martin Luther as a heretic. Luther burned the document in a public bonfire and his defiance before the church was now a matter of record.

In response, Martin Luther picked up his pen to challenge the entire penitential system of the Roman Catholic Church, which undermined in principle the free remission of sins that is ours in the gospel. By doing so, he was unswervingly advocating his commitment to sola fide, the doctrine of justification by faith alone.

In 1521, Luther was summoned to the Imperial Diet, an authoritative meeting that involved the princes of the church, called by the Emperor of the Holy Roman Empire to be held in the city of Worms in Germany. Luther was an outlaw. For him to appear at the Diet was to risk his very life; therefore, he was given safe conduct by the Emperor to attend. With a few friends, Luther traveled from Wittenberg to Worms. The eyewitnesses of that episode tell us that when Luther’s little covered wagon appeared around the corner of the bend, there were lookouts posted in the church tower at Worms. All the people were agog waiting for the arrival of this notorious person. When Luther’s caravan was sighted, people were throwing their hats in the air, blowing trumpets, and creating all the fanfare of the arrival of the hero. It was the 16th century answer to a ticker-tape parade.

Things, however, became very solemn in a hurry because the next day he appeared before the Diet. His books were stacked on a table in the room, and he was asked and ordered to recant of his writings. This surprised Luther because he thought he was going to have an opportunity to defend his writings; but the only question really of any importance that was asked of him was this: “Are these your writings?” And when he said yes, they said, “Are you ready to recant of them?”

Hollywood has their version of Luther standing there boldly with his fist in the air saying, “Here I stand!” and so on. But instead he dropped his chin on his chest and muttered something that nobody could understand, so they asked him to speak up. “What did you say?” He said, “May I have 24 hours to think about it.” And so Luther was granted a reprieve of 24 hours to return to his room to contemplate the seriousness of this occasion.

The prayer that Luther wrote in that ensuing 24-hour period was one of the most moving prayers I have ever read in my life. In that prayer, Luther cried out for God in his sense of total loneliness fearing that God had abandoned him, and proclaimed, “O Lord, I am Thine, and the cause is Thine, give me the courage to stand.”

And on the morrow, Luther was called once again back to the court and was told to reply to the question. He said to the Diet, “Unless I am convinced by sacred Scripture or by evident reason, I cannot recant, for my conscience is held captive by the Word of God, and to act against conscience is neither right nor safe. Here I stand. I can do no other. God help me.” And with that there was an instant uproar.

The Emperor himself later indicated his regret that he even gave Luther a safe conduct, and immediately put a new price on his head. As Luther was leaving the city, his friends staged a kidnapping to protect him and took him away in a fast horse through the forest. They hid him for a year in Wartburg at the castle disguised as a knight. During that year, Luther undertook the task of translating the Bible from the biblical languages into German. And that perhaps was his most important legacy of that time - that he made the Bible available to the common people. And with that the Reformation was born.

—R.C. Sproul (from the series, Heroes of the Christian Faith) 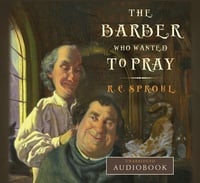 In honor of Reformation Day, we are making Dr. Sproul’s newest children’s audiobook, The Barber Who Wanted to Pray, available as a free download through Reformation Day (Oct. 31). You can also pre-order the CD version of this story or buy the hardcover illustrated children’s book published by our friends at Crossway. May you and your family benefit from this helpful resource on prayer.

The Barber Who Wanted to Pray by R.C. Sproul
(Right-click to save to your computer)