The Mighty Weakness of John Knox: An Interview with Douglas Bond

Reformation Trust: What does the title—The Mighty Weakness of John Knox—mean?
Douglas Bond: We tend to think of Knox as the bold, thundering, charge-into-the-fray, no-holds-barred Reformer—sort of a giant who walks into the room and says, “Everybody move!” and they do. But the more research I did, the more formidable problems with this stereotype emerged. The title reflects the character of Knox that developed from my research. The thundering might of Knox’s ministry was not the result of DNA. He was not a giant who just switched loyalties. Knox was a meek, reluctant personality, a weak man in the flesh, made mighty by the grace and power of God’s sovereign call on his life in the gospel. 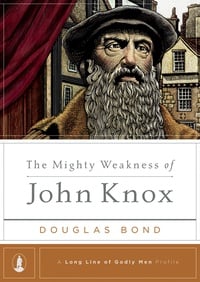 RT: Why is it important for Christians today to read about John Knox?
DB: We who live in the twenty-first century are such self-satisfied individuals, and this has an effect on the church, in a big way. We’re so impressed with our progress, our technology, our innovations, our scholarship. We tend to look down on the past. Now, there are things to distance ourselves from in the past, to be sure. But sitting down and feasting on the rich legacy that we have from those God raised up and equipped to confront the challenges to the gospel that litter history—learning of these challenges and how God raised up men like Knox to contend for the faith through them—is essential for Christians surrounded by a world that scorns the past and worships ourselves and the work of our hands in the present. I don’t think learning from church history and men like Knox is take-it-or-leave-it optional for Christians who know they must have the perspective of the ages on the moment they are living in in the present.

RT: You argue that the typical understanding of Knox as a giant of men thundering against queens is somewhat inaccurate. How so?
DB: A guy who, when first called on to preach God’s Word, breaks into tears in public and flees the room doesn’t sound to me like a man who thundered simply because he was inherently a thundering sort of guy. Another feature of Knox’s life—and I include an entire chapter on it, so central is it to understanding the man—is his life of prayer. Men who know they’re weak and needy tend to be better prayers; men who know their frailty, who abandon all hope in themselves, these are the men who fall on their knees and cry out to their all-powerful God. That was Knox. Tyrants didn’t fear sickly, timorous Knox. Tyrants feared Knox’s praying more than the cannons of ten thousand soldiers.

RT: Is it necessary for the contemporary Christian to study Christians who lived so long ago? How could they be relevant for the milieu in which we live?
DB: There really is nothing new under the sun. What goes around does, indeed, come around. All the greats of church history were great precisely because they contended for the gospel in the particular way in which the gospel was under attack in their day. The gospel is under attack in our day, and anyone who thinks otherwise needs to spend more time studying church history (and Paul’s epistles and the whole canon of Scripture). The thing that so impressed me with Knox was how unflinching he was about getting the gospel right. Anything that intrudes between the sinner and Christ our righteous Redeemer was idolatry to Knox, and idols had to be torn down. We need this today, in a big way.

RT: In the preface of the book you write that Knox is a model for the ordinary Christian. What makes him relevant to all Christians?
DB: If we’re honest with ourselves, in the trembling loneliness of our own hearts, we’re all weak, insecure, frail and dying individuals. Some attempt to compensate by shouting this down and being arrogant, proud, and noisy. But many simply fear they have nothing to contribute, that God can’t use someone so ordinary, weak, unskilled, or simple as they know themselves to be. In Knox as he really was, there is great encouragement for the saints who feels they have nothing to contribute. I was thrilled to discover this dimension about Knox’s life. It seems so eminently practical for so many dear saints, the elderly, the untried youth, the sick, the handicapped, the many for whom life has been a succession of disappointments—God has a purpose and a use and role for each one of his children in his family in every age—yes, the broken reeds and the smoking flax. This is what I so much want to convey in this little volume. Readers may forget details about the convoluted history in Knox’s world, but my hope is that they will not forget the mystery of God’s providence in forgiving the adulteress, in calling smelly fishermen, in choosing the younger brother, in raising the dead.

RT: What is a Christ-subdued life?
DB: Simply put, it is dying that we might live. It is a life, like Knox’s, where I must decrease and he must increase. It is knowing that without Christ we are nothing, but with Christ as our righteousness, as our Redeemer, as our Lord, and as our friend, weak, frail, and timorous sinners can do all things.

RT: What was the source of Knox’s strength in his own weakness?
DB: Christ, Christ alone, solus Christus!

RT: How is weakness an “essential prerequisite to being used of Christ”?
DB: Without knowing who we really are, we can never be made good by Christ Himself. Therefore, right self-knowledge, as in the order of John Calvin’s Institutes of the Christian Religion, goes hand in hand with right knowledge of God. If we think we can worship, serve, obey, or be faithful to even the tiniest degree without the grace of God in Christ alone, we haven’t gotten the gospel right. We’ll never be used of Christ if we think we are clever, well-educated, sophisticated, or inherently gifted. Christ takes the empty and fills them. He came to seek and to save those who knew that they were in desperate need, that they were lost.

RT: What are some of the ways in which we see Knox’s strength in weakness?
DB: It is remarkable to see a man who feared preaching before friends, stand and deliver fearlessly before tyrants who had the power to lop his head off—and he knew they had this temporal power. Yet he preached anyway, and what preaching it was! He called a spade a spade, and a fig a fig, as he put it. There was no mincing of words with Christ-empowered Knox.

RT: What have you personally learned from John Knox’s life?
DB: I have learned so much it is hard to begin. God does not call all of us—myself included, of course—to be the instruments of reformation in an entire nation. But He does by His grace alone raise me from my weakness and insecurities to find strength in Christ alone, period, plus nothing.

RT: What was your favorite chapter to write in this book?
DB: I found writing the first draft of the final chapter while sitting in Knox’s house (for skeptics who don’t think it was his house, I just could not find evidence to sufficiently discredit the long tradition of the house at Trunk Close being, in fact, a house that Knox did live in, and the house he died in) on the Royal Mile in Edinburgh in April of 2010 a favorite chapter. I read from it just a few weeks ago with a tour group my wife and I led, and that was also a meaningful part of that chapter, sort of a completion of it in the final book form. It recounts his dying hours, the comfort he found in God’s Word read by his young wife, and his final words.

RT: Who do you hope will read the book?
DB: I hope our unbelieving coach driver on the most recent tour will read the copy I gave him and everyone on the tour signed with a note of appreciation to him; the gospel is on every page. But I do hope all Christians—yes, especially the non-Presbyterian ones—will read it. All Christians who have ever felt inadequate to the challenges they face.

RT: If readers take only one lesson from this book, what do you hope that will be?
DB: My hope is that this little book will help little Christians to look away from themselves and to the splendor and might of Jesus Himself.

Find out more about this and other titles in A Long Line of Godly Men Profile series published by Reformation Trust Publishing.