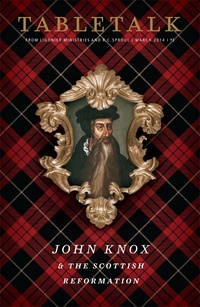 The March issue of Tabletalk is out. This issue examines the life and work of John Knox and the Scottish Reformation. John Knox might be considered by some an unlikely prospect to lead a reformation in the church, but that time and place required his blunt and uncompromising personality. The Reformation in Scotland did not come without personal cost to Knox and those who followed his call. These men and women suffered greatly for their faith, and because of their sacrifice, the Scottish Reformation had an influence far beyond the boundaries of this small country. This issue seeks to explain the ongoing significance of Knox and the Reformation he spearheaded in his native land.

800-435-4343 or by subscribing online and receive immediate access to the digital edition.

The April issue will focus on the Great Commission given by Jesus and explore how to apply this command to actual situations Christians face every day.

What’s So New About the New Covenant?

The June issue will look at what Scripture teaches concerning our associations with other people both inside and outside the visible church.