In February 1970, Mrs. Dora Hillman, the widow of the industrial tycoon J. Hartwell Hillman, came to visit R.C. and Vesta Sproul in Cincinnati, Ohio. Mrs. Hillman was excited about R.C.’s teaching, with which she became acquainted through R.C.’s ministry as the associate pastor of teaching and evangelism at College Hill Presbyterian Church in Cincinnati. Mrs. Hillman, along with the heads of several different Christian ministries in the area of Pittsburgh, Penn., wanted to open a study and conference center featuring R.C. as its teaching theologian, and she offered fifty-two acres of property for such a center near Stahlstown, Penn., an hour east of Pittsburgh. R.C. was to train Christian leaders serving in organizations dedicated to reaching Pittsburgh for Christ. Thus, the Ligonier Valley Study Center was born. 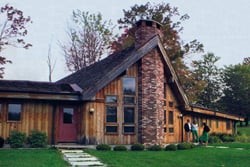 In the summer of 1971, the Sprouls, along with Jim Thompson and his family, moved from Cincinnati to Stahlstown. Jim, an engineer with Proctor & Gamble, had developed an audio ministry at College Hill Presbyterian Church. Jim, his wife, Cathy, and their four children took up residence in the old stone farm house while R.C., Vesta, and their two children occupied a new home that also doubled as the lecture facility. Within a year, Steve Gooder and his family joined the staff, building a large two-story home overlooking the property. Tim and Marilyn Couch, who bought a farm down the road, also came on staff at the study center. Stone East was built during that time, providing space for offices, a kitchen and dining room, and a few small bedrooms.

In many ways, the study center was modeled after Francis Schaeffer’s L’Abri in Switzerland. Students came for extended periods of study, paying part of their fees in cash and working off the rest doing yard work, cooking, cleaning, audio tape duplicating, and a host of other jobs. In that first year, the students lived and ate in the staff homes with the families. On the weekends, church groups would come in for seminars taught by R.C. on a subject of their choosing. These groups numbered up to thirty people, and they were assigned sleeping quarters in the staff homes. They also ate their evening dinner with one of the families.

The weekend seminars gave Jim Thompson’s tape ministry the opportunity to record R.C.’s lectures, creating a vast library of audio teaching tapes that began to spread rapidly around the country. R.C. traveled often to speak at churches and conferences, expanding the Christian world’s awareness of the Ligonier Valley Study Center and Reformed theology.

Lecture series were first videotaped over Thanksgiving weekend in 1974. Jack and Linda Rowley, who had sat under R.C.’s teaching in Cincinnati, came to record R.C. in a way that would carry his teaching into churches, schools, and Bible studies throughout the nation. Soon R.C. was reaching hundreds each week in Cincinnati by video. Former students who were unable to visit the study center could once again sit under R.C. through this new technology. In 1977, the Rowleys left Cincinnati where Jack had been in charge of GE’s Aircraft Engine Training School TV production facility to move to the center and assume the task of expanding the audio and video tape ministries.

By that time, Ligonier had five other teaching staff to help R.C. with the full-time students and weekend seminars. Bill White, a Christian psychologist, became the director of ministry, and he also handled all of the counseling and taught practical theology. Tim Couch, Stu Boemig, Jackie Shelton, and Art Lindsley carried out teaching assignments for the full-time student programs and other special seminars. 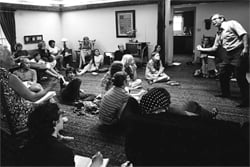 The Ligonier Valley Study Center had settled into a regular schedule of events. On Monday evenings in the summers, people came to hear R.C. or John Gerstner instruct them in theology, philosophy, and apologetics. Gerstner, who was R.C.’s mentor, was in the final years of his career as professor of church history at Pittsburgh Theological Seminary and was laboring in a fifteen-year project to systematize the works of Jonathan Edwards. The turnout on Monday nights was so large that some attendees had to stand outside the open windows and doors of Lecture House. Wednesday morning Bible studies for the local community met regularly. At these studies, R.C. taught verse-by-verse through different books of the Bible. On most Friday evenings, large groups came in for a weekend seminar. They stayed in the new Cedar Lodge or in staff homes. Breakfast and lunch were served in Stone East, but the evening meals were spent around the dinner tables with staff families. The weekend usually ended with R.C. preaching on Sunday morning in Lecture House, followed by a final brunch in Stone East with the staff and their families.

The Ligonier Valley Study Center was turning into a full-orbed educational ministry that was reaching out to Christians in many different fields, even partnering with other groups for the sake of the kingdom. The Leaping Ahead Program under Bill White developed the body as well as the spirit — a sort of spiritual bootcamp. Bill made sure that there was a balance of physical exercise, proper diet, in-depth Bible study, and plenty of Christian fellowship. He also scheduled regular sessions with each student to counsel and guide them in their career path. Chuck Colson’s Prison Fellowship brought inmates from prisons around the nation to the center six times a year. Wayne Alderson’s “Value of the Person” program was taught to the management team of Volkswagen’s new assembly plant in nearby New Stanton. Other special teaching events included training for Young Life, Christian Coalition, and Youth for Christ. College courses were offered for May and January terms from 1972 until 1979. R.C.’s teaching ministry expanded rapidly. In 1980, Linda Rowley was hired to help market video teaching series to churches.

One could always count on Mrs. Hillman to come from her nearby farm and slip into the back row to hear R.C. teach. She supported many of the ministry organizations that utilized the study center, and it wasn’t unusual for her to host a large group at her Hilltop farm a few miles away. The house sat on the summit of the tallest mountain in the region. One could stand in her huge living room glassed-in on three sides and look down at the countryside in every direction. Mrs. Hillman loved to collect and stockpile native walnut and chestnut lumber salvaged from old buildings in the area. She covered an entire wall of the TV studio at the study center with varnished slabs of walnut — some of them three to four inches thick — sliced from top to bottom with the bark left on. All of that walnut was eventually shipped to Orlando upon Ligonier Ministries’ move in 1984. Most of it now comprises the ornate walnut partition in the chancel of the original Saint Andrew’s church building in Sanford, Fla., which is part of the greater Orlando area.

Mrs. Hillman died in 1982, but not before she saw the completion of a new, state-of-the-art video recording and production studio in 1982. This studio allowed for professional recordings of R.C.’s lectures to be made each time he spoke. The teaching ministry continued to expand, and in 1983, over one hundred lectures were recorded and made available to churches.

Having become more than just a study center and desiring to increase its reach, the board of directors changed the name of the Ligonier Valley Study Center to Ligonier Ministries and moved the organization to Orlando in 1984. The original study center facilities in Stahlstown were sold to a drug rehab ministry. After ten years this ministry closed its door, and the property with all of its buildings reverted back to Ligonier Ministries, who sold it to a private investor.

The fourteen years of teaching and nurturing carried out at the Ligonier Valley Study Center in the Laurel Mountains of the Alleghenies made a spiritual impact upon thousands of Christians. It was the beginning of a new ministry led by R.C. Sproul that would eventually reach out to millions around the world. God had used Dora Hillman to donate property, called R.C. and other teachers of Reformed theology, and assembled a support team. Today, Ligonier Ministries continues to teach the Word faithfully and proclaim the holiness of God and our risen Lord via radio, Tabletalk magazine, audio CDs, video DVDs, the internet, conferences, books, and much more.