Dr. R. Albert Mohler Jr. is president of The Southern Baptist Theological Seminary in Louisville, Kent., and one of evangelicalism’s leading cultural commentators. He hosts the daily radio show, The Albert Mohler Program, and serves on the board of Focus on the Family and the Council for Biblical Manhood and Womanhood. Dr. Mohler has also written or contributed to several books including Atheism Remix, Preaching the Cross, and He Is Not Silent. He can be followed on his blog, AlbertMohler Dot Com, and on Twitter @albertmohler. Dr. Mohler’s address was entitled The Hypersocialized Generation. 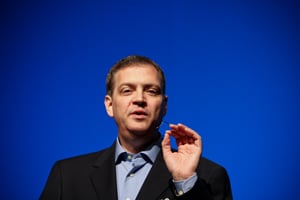 We are relational creatures. The new media emulates relationships. Sometimes they accomplish relational goals; for example, we are able to re-connect with long lost friends. But what seems to suffer is our conversation at the breakfast table or with the person down the hall. Some people are so invested in digital devices that they aren’t able to connect with others in their family. [Dr. Mohler wrote on this today on his very helpful blog.]

This is a hypersocialized generation. The use of social media is, for some, compulsive and unconscious, and it dominates the minds of many teenagers and some twentisomethings from morning until night.

About five years ago, a study revealed that we spend 6.5 hours with media. Five years later (today), that figure is 7.5 hours/day. And, young adults are cramming over 11 hours of media into 7.5 hours/day (via multi-tasking - engaging in more than one form of social media at the same time).

One in three American teenagers sends more than 100 text messages a day.  Two/thirds of teens say they are more likely to text their friends than talk to them. Half of all teens send more than 50 texts a day. Boys typically send and receive 30 texts/day, and girls 80 texts/day.

There are teenagers who have cell phones simply as platforms for texting, not for speaking to others. And many parents and children have replaced face-to-face conversation with voice-to-voice (via cell phone) interactions and now to text-to-text exchanges.  Some families even text each other while they are in the same house.

If that volume of texting is happening, something else is not happening (like sleep or study). And the kids in many ways merely mirror their parents.  Mom and Dad fall asleep with their laptops on them while the kids fall asleep in the cocoon of their technology.

We have a new reality today. What happens to our souls?  For many boys, social media becomes a means of escape — a private world. This happens for adult males, too. For many girls, it becomes a means of non-stop relational connectedness. They don’t want to miss a word that goes out virally within their circle of friends.

The same technology enables us both to hyper-relate and to hyper-isolate. Many say this is the most fundamental shift since the development of human language and the invention of the printing press. When Facebook came out, nobody envisioned that millions would someday (just a few years later) be related to each other in this medium. We have not yet taken account for what these things mean.

1. The digital revolution is here to stay.

If you tell a teen they don’t need their cell phones 24/7 it is as if you are telling them to stop breathing. But we, too, have a plethora of people (clients, donors, etc.) who want to be able to reach us instantly.  The revolution is here to say because of the direction of the economy. Just try buying an airline ticket via telephone. Call centers are just serving those who can’t follow the instructions to get online.

For every person who says, “I don’t do any of that e-mail or Facebook stuff” — those folks have assistants who do it for them.

No, this hypersocialization is only going to increase.

A central concern should be directed toward the young. Many parents set no rules for the technology use of their children.  They set content boundaries—and those are very important (to filter pornography, for example). But many don’t know that cell phones can access inappropriate content also.

And there should be other boundaries, too. Teens should not have cell phones in the bedrooms at night. If they do, they represent an invitation not to study or sleep. Internet-connected computers in the bedroom are also a major danger.

On that note, please observe that silence is in short supply in our day. To direct the mind to God, for example, requires silence. Yet that is so missing from our culture today. It no longer even comes to us naturally. Many are afraid of silence, because in silence we hear ourselves.

They read in snippets online, but the actual reading of hard copy books is scant. Yet as Christians we need to be people of the Book. We need to be unafraid to be alone with our Creator and with our own thoughts.  The Bible takes patience to read and appreciate. But we kill ourselves with non-stop noise.

5. Multi-tasking is a myth.

The average worker in an office with a computer changes frames 37 times/hour. We claim that we can “listen to X, read Y, and do Z” at the same time. Yet multi-tasking is a myth, our brains cannot handle it.  We are losing our ability to read facial expressions. Teachers are noting that even kids arriving at kindergarden are less able to read facial expressions. they are already accustomed to merely gaze at non-human screens.

When a teen gets a cell phone, his or her relationship with their parents is forever changed. That teen goes to college and (often times) is in constant contact with his or her parents, which diminishes their ability to grow up and make decisions for themselves.

6. We need to address this challenge in ourselves first.

Some churches are asking members not to friend anyone on Facebook whom they kissed in high school or college. Indeed, Facebook represents a way to be connected with others with whom we can sin.  [Related Editorial Observation: One recent study found that Facebook was mentioned as a facilitator in 20% of divorces, as people used the tool to kindle extra-marital attractions.]