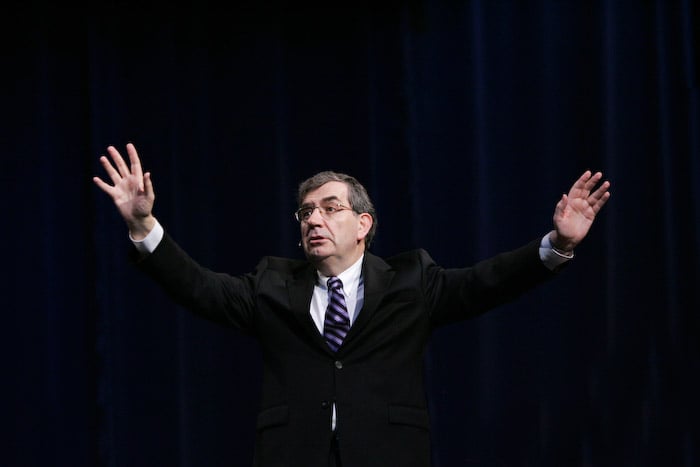 Dr. Sinclair Ferguson is senior pastor of First Presbyterian Church in Columbia, S.C., and Distinguished Visiting Professor of Systematic Theology at Westminster Seminary. One of the most renowned Reformed theologians in our day, Dr. Ferguson is also a member of the Council of the Alliance of Confessing Evangelicals. He is a prolific author whose many books include The Holy Spirit

, By Grace Alone: How the Grace of God Amazes Me

, and In Christ Alone: Living the Gospel Centered Life

Dr. Ferguson read from Isaiah 53:1- 12. He noted that Isaiah 53 rivals Psalm 110 for maximum New Testament citations, and surpasses Psalm 110 with respect to allusions. Isaiah 53 is the passage that Christ must have turned to again and again. We can hear him saying, “Was it not necessary that the Christ should suffer these things and enter into his glory?” (Luke 24:26)

Isaiah conducted his ministry during the exile. They had been carried off to Babylon because of the Deuteronomic curses. Isaiah recognizes that what God’s people need is a new exodus - not from Babylon per se, but from sin itself (true bondage). In Isaiah 53, the prophet is given illumination into the suffering of the Son of God.

I. THE SERVANT’S TRIUMPH IS WHOLLY UNEXPECTED (vs. 1)

In order to repair the disfigured people of God, the suffering servant will Himself be disfigured. He “descended into hell.” He was deserted by God. So it was utterly astonishing for Isaiah that He ultimately triumphs. We need to see and feel the tension in the gospel. There is so much in the gospel that ought not to be for sinners! We need to grasp this in order to maintain amazement.

II. THE SERVANT’S HUMILIATION IS DESCRIBED (vs. 2-3)

In the conclusion of Isaiah’s call, in Isaiah 6:13, we see this reference to a stump that remains. And then a root rises out of that stump. And as Jesus grew, he would experience ongoing rejection. He would be despised. His dignity and reputation would be tarnished unjustly.

III. THE SERVANT’S SUFFERING IS EXPLAINED (vs. 4-6)

He took on amazing suffering - and why? Because of our sins. He was inwardly crushed because of the perversity of our hearts. And he was externally (physically) brutalized. Note the use of both familial and judicial punishment. The “chastisement” in verse 5 is family language - the servant undergoes chastisement “within the family” to bring us “into the family.” And the “stripes” in verse 6 refer to the judicial punishment due to a guilty lawbreaker.

There are four things that Isaiah is trying to teach us about the nature of Christ’s atonement.

1. Imputation - Our sins were imputed to the Lord Jesus Christ, and Christ’s righteousness was imputed to us.

Our sin and its consequence - they became His. He takes it. And when we come to faith in Jesus Christ, we are not just declared forgiven. No, the righteous One makes many to be accounted righteous (see verse 11). Jesus obeyed the Father in our place. As we trust in Him, we stand before the infinitely holy God as righteous as the Lord Jesus Christ, because that is the only righteousness with which we can stand before God.

2. Substitution - Jesus took our place in receiving condemnation from God.

Not only is Jesus our substitute, He is also our representative before God. We have political representatives, but they don’t come and take our suffering for us. Jesus comes and stands where we ought to stand and takes our place. It is like someone giving their spot to another person on a lifeboat when the Titanic is going down. But to what end was Christ our substitute? He was our substitute in order to bear the just penalty of God.

3. Penalty - Jesus fully experienced the wrath of God that was justly due to sinners.

He was oppressed and afflicted, yet he bore it silently and patiently. He was led to the slaughter as the Old Testament sacrificial lambs prefigured.

4. The hand of deity - it is God’s hand that has laid upon Christ our iniquity.

Jesus cried out “My God, my God, why have you forsaken me?” Is that divine child abuse? No. Jesus could say that “for this reason the Father loves me, because I lay down my life that I may take it up again.” (John 10:17) On the one hand, God unleashed His wrath upon Jesus. On the other hand, God the Father must have been so proud of the immense obedience of His son.

He did not open his mouth when he was slandered. He was accused of blasphemy and he did not become defensive. In silence, he stood condemned for sins which we have committed (like blasphemy). In obedience, he bore our punishment. On the one hand, Jesus is rightly humiliated because He takes my place. But on the other hand, Jesus is wrongly accused since He was innocent.

Yet Christ was later vindicated (vs. 10b). God gave him the nations as his offspring (Psalm 2).