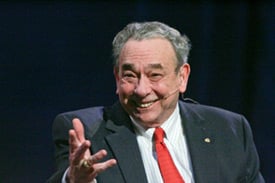 This afternoon we finally got to hear from R.C. Sproul. He chose to speak from a few verses in Galatians 1 and 2 and said that he has probably preached this message 100 times in the past. He provided a brief defense of the importance of the doctrine of justification by faith alone (or sola fide) and followed that with a short exposition of this doctrine.

And it is an important doctrine. What divided Christendom at the time of the Reformation, and what has kept it apart ever since, was no small point of theology. The material cause of the Reformation was the gospel. The essence of the gospel has to do with an objective content that describes the person and work of Christ. In addition to that objective content there is also the important question of how the content of the gospel is subjectively appropriated to the sinner. The New Testament declares that we lay hold of Christ and gain the benefits of His death and resurrection by faith and by faith alone. This point of doctrine was the heart of the Reformation. Galatians is an appropriate passage to speak from because when Paul writes to this church he sees that the Galatians have not lost their confidence in the perfect life of Jesus and have not lost their confidence that He died for their sins. Instead, they moved away from a right understanding of how the benefits of Christ’s work are appropriated to us. They began to believe it was faith plus rather than faith alone. And this little word makes all the difference.

It was this same issue of “faith plus” that stirred Martin Luther, who in turn stirred up the whole world. It was this issue that quickly caused that great breech in Christedom. He saw correctly that it was the gospel itself that was at stake. He knew that the doctrine of sola fide is the doctrine on which the church stands or falls; it is the very cornerstone of the gospel. Without sola fide the church cannot exist for one hour. If that gospel is removed or obscured or denied, the church doesn’t lie there gasping for breath; the church is dead.

If you have never heard R.C. Sproul’s defense of this doctrine (or even if you have), but sure to watch the video of this session when it becomes available tomorrow. No doctrine is as important, as fundamental, as this one. There is no better doctrine upon which Christians ought to declare, “Here we stand!”