Dr. Michael Horton is J. Gresham Machen Professor of Systematic Theology and Apologetics at Westminster Seminary California, and he co-hosts White Horse Inn, a nationally syndicated radio talk-show that explores issues revolving around Reformation theology in American Christianity. Dr. Horton is a minister in the United Reformed Churches of North America and is an accomplished writer whose many books include Christless Christianity and Introducing Covenant Theology.

Dr. Horton gave the second address of the Ligonier National Conference. He took up the topic Is the Doctrine of Inerrancy Defensible? 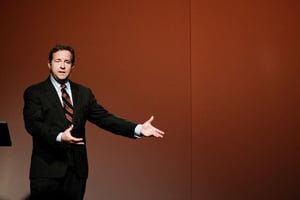 There is a resurgence of inerrancy in our day, particularly among the “young, restless, and reformed”. Dr. Horton noted that Herald Lindsell was helpful to him in forming his own conviction that the Bible is inerrant.

We’ve had a longstanding modernistic milieu that says that things happen for purely natural reasons. God doesn’t speak to us in judgment, or with the good news of salvation (because we don’t need to be saved). The external Word of Scripture and the internal confirmation of the Spirit was the historic view, but the Enlightenment teachers removed the need for the former. Thus for Enlightenment thinkers, we live in a closed universe.  We seek moral imperatives.  “Nothing new is imposed by the gospel; our already good disposition is only strengthened.”

So we allow nothing to impose itself on reason.  Christianity is rational but not rationalistic. Every Christian doctrine contains mystery but no Christian doctrine is contrary to reason. Rationalism, on the other hand, allows no external authority. Today, we are often schizophrenic, we study scientific laws using reason, then go home and play with spirituality.  We don’t want an external authority to speak into our lives, yet we acknowledge that reason alone does not suffice.

The Reformers were committed to Sola Scriptura because in that Book God had spoken to us clearly. The battle for inerrancy is the battle for the gospel. The Bible not only announces salvation, it rules. We see this idea in the treaties between nations in the days of the Old Testament, and of course the same warnings are found in Scripture (cf. Rev. 22:18-19).The Word of God is self-authenticating. You don’t need to be able to be an apologist to hear God in the Bible. But we are called to give a reason for the hope that is in us (I Peter 3:15).

The objective, external evidence of Christ’s resurrection is very strong. Those who deny Christ’s resurrection have never been able to supply the Body of Christ. Not only was no body ever found, there was an immediate growth in the number of adherents to the resurrection, and these maintained their faith in this historical event on pain of death. Jesus really rose from the dead.

Everything that is done by the Godhead is done by God the Father through Jesus Christ by the Holy Spirit.  And this is true of inerrancy as well. In inspiration, the Father is speaking, the content is the Son, and the Spirit enables inspiration and also illuminates the Word to our hearts.  (Notice in 2 Cor. 1:19-22 we find reference to all three members of the Godhead.)

B.B. Warfield and Archibald Hodge’s classic work The Inspiration and Authority of the Bible. remains the seminal defense of inspiration.

1.  Biblical inspiration applies to the substance of the original autographs of Scripture. Scripture is nevertheless the actual work of the writers’ mental faculties.

God superintended (or providentially guided) the process such that the writers’ freedom was not abrogated.  Our freedom, let’s remember, is creaturely freedom. It is an analogy, or a copy, of God’s freedom. It is because of God’s freedom that human’s have freedom. The Bible is truly human, yet without error (just like Jesus).

They were willing to wrestle with passages which seemed to contradict one another but which, upon deeper inspection, were not inconsistent with each other.

3. The claim of inerrancy is that in all their real affirmations these books are without error.

Moses was not an astronomer. If a Psalmist says the world rests on four pillars, this is poetic language. The smallest seed in all the world is not actually the mustard seed. Even Jesus in His day (with His creaturely limitations) did not know which seed was the smallest. What is really being affirmed here? That the kingdom of God starts out really small and then it gets really big.

The Bible is not meant to be a science text.

4.  We’re not claiming that our English translations are absolutely perfect.

Textual criticism is not an attack on any major doctrine.  We still can wrestle with the challenging passages in our English Bibles.

The Bible is a pattern of sound words. It reveals the faith once for all delivered to the saints. The miracles of the Bible were not done in a corner. Every “miracle” of Islam was done in a corner. The Bible invites scrutiny and has withstood three centuries of it.  Christianity is founded on firm historical evidence. The Bible is solid ground, all other ground is seeking sand.