The Legacy of Luther: Meet the Reformer Who Set the World Ablaze

We are pleased to announce the release of The Legacy of Luther, edited by Drs. R.C. Sproul and Stephen Nichols. This title is available now from Reformation Trust in the Ligonier store.

He was one of the most influential men of his day. In him, we find the example of one who stood upon the convictions of God’s Word. The result was the Protestant Reformation. The movement that began with his posting of the Ninety-Five Theses reshaped Europe, redirected Christian history, and recovered the truth of the gospel. Five hundred years later, what is Luther’s legacy? In The Legacy of Luther, Drs. R.C. Sproul and Stephen J. Nichols lead a team of thirteen scholars and pastors as they survey his life, thought, and legacy. Also included are a foreword from John MacArthur and the complete text of the Ninety-Five Theses. Meet Martin Luther, the audacious Reformer, whose passion for God’s Word set the world ablaze. 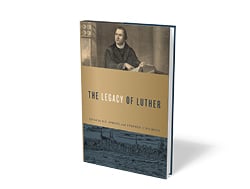 “I love Martin Luther because he embodied the struggle of every Christian to have peace with God.”

Dr. R.C. Sproul is founder and chairman of Ligonier Ministries, and chancellor of Reformation Bible College. He is the author of more than one hundred books, including Defending Your Faith.

Dr. Stephen J. Nichols is president of Reformation Bible College, chief academic officer for Ligonier Ministries, and a Ligonier teaching fellow. He is author of The Reformation: How a Monk and a Mallet Changed the World. He is on Twitter @DrSteveNichols.