Introduction to The Reformation Study Bible

The Bible is an inspired book, that is, “breathed out” by God. Inspiration reaches far beyond the scope of the inspiration of human artists as commonly understood. The Bible offers more than brilliant insight, more than human sagacity. It is called “inspired” not because of its supernatural mode of transmission via human authors, but because of its origin. It is not merely a book about God; it is a book from God. Therefore the church confesses its trust and confidence that the Bible is the vox Dei, the veritable “voice of God.”

The Bible is a normative book. The church has declared that the Bible is the “Norm of norms, and without norm.” A norm is a standard, a measuring rod by which things are judged. We may use many lesser standards to regulate our lives, but all such regulations must be subordinate to Scripture. To be the “Norm of norms” is to be the superlative norm, the standard by which all other norms are measured. The Bible is not simply “first among equals” - it has no parity with other standards. As Jesus is exalted to be Lord of lords and King of kings, so we submit to His Word as the Norm of norms, the standard of truth and the one rule for the people of God.

God is the Lord of heaven and earth, and He alone is able to impose absolute obligation upon His creatures. He does this through the written word. The reformers of the sixteenth century recognized this unique authority of the Bible, expressing it in the watchword sola Scriptura, “the Scripture alone.” The reformers did not despise other authorities, or deny the value of tradition and the creeds, but they distinguished the singular authority of the Bible, “the only infallible rule of faith and practice.”

God calls every Christian to pursue righteousness. Our trust is to be childlike, but our understanding must be mature. Such trust and understanding require study of God’s word. The authentic disciple meditates on it day and night, continuing and remaining in it. Our goal is more than knowledge; it is wisdom and the fruit of inward and outward obedience. 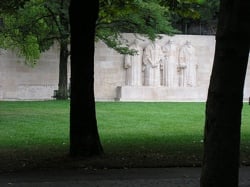 This Reformation Monument is adorned with statues of the great leaders, Calvin, Beza, Farel, and Knox. Surrounding these figures is the phrase, post tenebras lux — “After darkness, light.”

The light of the Reformation was the light of the Bible. Luther translated the Latin Bible that could be read only by professionals into everyday German that could be read by the people. In England, Wycliffe and then William Tyndale had translated the Bible into English. Yet there was substantial opposition to these efforts. Tyndale was burned at the stake in 1536. During the reign of Mary Tudor (1553-1558) the Reformation was suppressed. The Roman Catholic mass had to be celebrated, services could not be conducted in English, and priests were forbidden to marry. Two hundred eighty-eight persons were burned, including the Archbishop of Canterbury, Thomas Cranmer.

These persecutions drove exiles from Britain to Europe. The most capable scholars among them came to Geneva, Switzerland. There they undertook the task of preparing a new translation of the Bible in English. The Geneva Bible was published in 1560, carefully designed to be accurate and understandable. It was the first English Bible to use verse divisions, as “most profitable for memory” and for finding and comparing other passages. It was provided with marginal notes based on Reformed principles.

The Geneva Bible dominated the English-speaking world for a hundred years. It was the Bible used by Shakespeare. The King James Bible was published in 1611 but did not supplant the Geneva Bible until fifty years later. The Pilgrims and Puritans carried the Geneva Bible to the shores of the New World. American colonists were reared on the Geneva Bible. They read it, studied it, and sought to live by its light.

Since that time a multitude of English translations and study Bibles have appeared. The Reformation Study Bible contains a modern restatement of Reformation truth in its comments and theological notes. Its purpose is to present the light of the Reformation afresh.

The Reformed accept the Christian faith as expressed in the ecumenical creeds and believed by Christians everywhere. The distinctive ideas of the Reformed are the result of accepting the Bible as the supreme authority for faith and practice. The words of the Bible are true and its message is powerful. It conveys the infallible promise of God, its Author, that it will not return to Him empty, but will certainly accomplish His intended purpose.