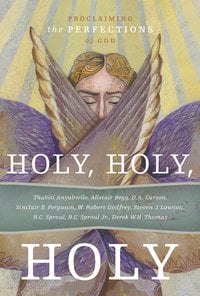 Tragically, the holiness of God has been obscured in our time, and as a result, the church’s doctrine and ethics have been tarnished, entertainment has replaced worship in many places, the gospel is misunderstood and neglected, and the church assimilates itself to the culture instead of seeking to transform it through the preaching of God’s Word. Holy, Holy, Holy: Proclaiming the Perfections of God is adapted from the addresses at the 2009 Ligonier Ministries National Conference. It unfolds the character of God and the holiness that sets Him apart. Here is high theology in understandable language, bringing deeper knowledge of God and promoting love for Him.

Dr. R.C. Sproul, chairman and president of Ligonier Ministries and minister of preaching and teaching at Saint Andrew’s in Sanford, Florida

Immediately after the devastating terrorist attacks of September 11, 2001, bumper stickers appeared saying, “God bless America.” At the same time, it seemed as if everyone in the world asked me as a theologian, “Where was God on 9/11?” I said: “He was in the same place he was on 9/10 and on 9/12. He didn’t move.” They would then ask, “How can God allow these things to happen?” Pat Robertson and Jerry Falwell unwisely said that the destruction the terrorists wreaked was the judgment of God on the United States. The hue and cry of the people of this country and the news media was so severe that Robertson and Falwell recanted their statements. It was unthinkable to the American people that God could have had anything to do with that calamity. We are a people who believe that God can bless a nation, but we refuse to accept the idea that God can judge a nation.

The reason for that dichotomy, I believe, is that we don’t know who God is. The God of popular religion is not holy. He is not the God who is introduced here in Isaiah, the God who brings the bull market and the bear market, who raises up kings and brings them down.

Page 14  from Sinclair Ferguson’s chapter entitled “Hallowed Be Your Name: The Holiness Of The Father”

In many ways, it would be much easier to write about the holiness of God, about which the Scriptures have a great deal to say, than to address the subject of the holy Father. If the truth be told, we are not really accustomed to thinking specifically of the holiness of the Father as Father. This itself underlines the fact that often when we speak about the holiness of God we are still thinking in a man-centered fashion in this sense: we speak of Him as being “separate from us.” But we are then thinking thoughts centered in ourselves rather than in Him.

Page 30  from Steven J. Lawson’s chapter entitled “The Holy One Of God: The Holiness Of Jesus”

There is no more dangerous place to be than where the direct, straightforward teaching of the Word of God confronts dead religion. As long as dead religion is allowed to sleep the sleep of death, all continues placidly and peaceably. But when the truth of Scripture challenges empty religion, a cataclysmic collision is sure to result. This is because whenever the Word is taught in houses of worship that are devoid of gospel truth, hell is aggravated. As soon as the light of holiness and truth shines into the kingdom of darkness, sin is exposed, unclean spirits are angered, and Satan is provoked. Satan has no greater strongholds than houses of worship where the truth is suppressed. Nowhere is he more deeply entrenched in the lives of people than among those who are religious but who have no supernatural light of holiness and truth. But there is no greater threat to Satan’s kingdom than the penetrating light of holiness and truth as it invades these fortresses of demons.

Page 45  from Alistair Begg’s chapter entitled “The Breath Of The Almighty: The Holiness Of The Spirit”

I think it best for me to simply say a number of things concerning the identity of this Helper with little embellishment. First, we need to notice that the Holy Spirit is a unique person and not simply a power or an influence. He is spoken of as “He,” not as “it.” This is a matter of import because if you listen carefully to people speaking, even within your own congregations you may hear the Holy Spirit referenced in terms of the neuter. You may even catch yourself doing it. If you do, I hope you will bite your tongue immediately. We have to understand that the Spirit of God, the third person of the Trinity, is personal. As a person, He may be grieved (Eph. 4:30), He may be quenched in terms of the exercise of His will (1 Thess. 5:19), and He may be resisted (Acts 7:51).

Of course, most people don’t believe that sin is contempt toward God. We have more polite terms for it. We say, “It was a mistake,” or, “I messed up.” But at the heart of all sin is a contemptuous attitude toward the person and the work of God, and toward His holiness and righteousness in particular. So next time you’re talking with a friend or a family member and you’re discussing that person’s sin, and he or she starts to use language like “I messed up,” just say, “No, I think you have contempt toward God.” Do you know what he or she will say? You’ll hear something like this: “No I don’t! When that happened, I wasn’t even thinking about God.” When you hear that, just say, “Exactly.”

That is the nature of contempt. It is not retaining the knowledge of God in our lives, in our hearts, and in our affections. It is the suppressing of the knowledge of God, as Paul describes it in Romans 1. We are to be consumed with love for God and the desire to worship Him, but because we’re sinners and misshapen in our sin, our contempt for Him manifests itself at the most basic level of not thinking about Him, but delighting in sin. That is why sin is treasonous.

Priests in ancient Israel were especially sanctified, particularly set aside for God. Yet there was a broader sense in which all Israelites were set aside for God, God’s “royal priests”: the focus is not so much on function as on privilege. Likewise, here in 1 Peter, the focus is not so much on the function of mediation as on the reality that all of God’s people are to pursue all the sanctification and all the consecration of those who enter as priests into the Most Holy Place, into God’s presence. In ancient Israel, under the old covenant, there was a sense in which the average Israelite might say: “Well, the priests have special ablutions to go through and undergo special examination, and only under certain circumstance can they take on the ephod. That’s not for me; that is for them alone.” God help us when Christians today start saying, “Well, it’s all right for the pastor to be holy, but I really don’t have to be.” All of us are God’s priests. All of us have been set aside. All of us have access, now that the veil has been torn, into the very presence of the living God. To start introducing a double-tier standard of holiness or of consecration makes no sense this side of the cross and resurrection of the Lord Jesus.

Page 91  from Robert Godfrey’s chapter entitled “Wounded For Our Transgressions: The Holiness of God and The Cross”

Can you remember a single sentence that any of your professors ever spoke to you? I don’t remember many, but I can remember one sentence from a rather liberal theologian, Robert McAfee Brown. He once said in class: “This is the essence of American religion—I like sinning and God likes forgiving, and the world is well put together.” That statement has stayed with me over the decades. I am afraid he was right—that does tend to be the American attitude. The tragedy of this attitude is that it trivializes everything. It turns me into a naughty grammar-school kid and God into an indulgent grandfather who thinks we are kind of cute in our naughtiness. But more than a trivialization, this view is a profound lie. It is a complete misrepresentation of who we are, of what sin is really all about, and most important, of whom God is.

Pages 107-108  from Derek Thomas’ chapter entitled “You Shall Be Holy: The Necessity of Sanctification”

It is one thing to talk about the holiness of God; it is another thing to desire holiness for ourselves. Yet holiness is an essential aspect of the Christian life. I think of Martin Luther’s great stress on a faith that produces works. Then there is John Calvin’s teaching in his Institutes of the Christian Religion as to the third use of the law of God (tertius usus legis) as a guide for sanctification. Likewise, there is the affirmation in the Westminster Confession of Faith that we are justified by faith alone, but the faith that justifies is not alone—it is always accompanied by works (11.2). Yet we live in a man-centered age and worship in man-centered churches. We live for self-fulfillment rather than to please God. We like books on how to be good fathers, how to be successful lovers, or how to improve our diets rather than books that explain to us how we can be holy and Christlike. Sometimes, in Reformed circles, we can be so easily concerned about theological issues that we miss the point. The point of all theology is to drive us to Christlikeness, to holiness of life, and to worship.

Page 125  from R.C. Sproul Jr.’s chapter entitled “Train Up A Child: Walking Together with The Holy God”

One of the blessings of family worship is that it is an opportunity to teach our children the content of the Scriptures, the content of our faith. Another blessing is that it is time together as a family. It reminds us of what we are as a family, of our family identity. Yet another blessing of family worship is that it reminds us, and our children, of our chief end. It reminds us that the worship of God is not relegated to Sunday, and maybe Wednesday if we’re not busy, but that it infuses and penetrates all of our lives. We understand that when God said we are to give Him one day in seven, He was not saying we could do whatever we want on the other six days. We give Him one day in order to communicate that we recognize every day to be His day. When we gather for family worship, we have much the same blessing.