Help Us Speak for Those Who Have No Voice 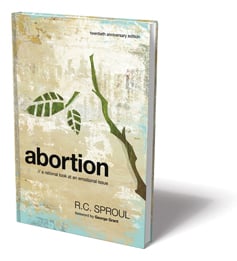 January 22, 2011 marks the 38th anniversary of the Roe v. Wade decision. On January 3rd, the 112th United States Congress will open with newly elected representatives in the Senate and the House of Representatives joining the incumbents. This is an important opportunity to influence our nation’s leaders on the critical issue of abortion. To coincide with both of these dates, Ligonier will send R.C. Sproul’s Twentieth Anniversary special edition of Abortion: A Rational Look at an Emotional Issue (Reformation Trust Publishing, November 2010) to every Congressional representative. Will you help?

The Goal: Raise $6k for Life

Our goal is to raise $6,000 to fund this effort. For every $10 that you donate, you send one book to a representative. It is our hope that this resource, along with a letter from R.C. Sproul, will make an impact on the hearts and minds of our representatives in Congress.

The Ethical Dilemma of our Time

In this important book Dr. Sproul looks at the issue from the perspectives of biblical law, natural law, and positive judicial law.

“Abortion is an ethical issue, perhaps the central ethical issue of the twentieth and now the twenty-first centuries. The issue has become so critical that no candidate for public office can remain silent on his or her views. The politician who tentatively puts his finger to the wind, hoping to gauge the direction of public opinion on abortion, is frustrated by the ever-changing currents. Both sides keep an anxious eye on the health of the current justices of the United States Supreme Court, as the balance of power there is fragile. The addition of one anti-abortion justice to the nation’s highest court could precipitate a reversal of the landmark Roe v. Wade decision, the 1973 case that made abortion on demand a reality in the United States.”

“R.C. Sproul’s rapier logic will put to flight rationalistic defenders of abortion. Those torn between conflicting claims about the humanity of the unborn, the role government, and the rights of women will find this book particularly instructive.”

“This is an important book for all Christians interested in bringing their beliefs to bear upon the world around them. Abortion is one of the most critical issues of our day, and R.C. Sproul looks at it through the lenses of theology, philosophy, and reason. This book is refreshingly free of hyperbole, and yet does not compromise the truth.”

Donate $10 now to this effort

Help Us Spread the Word

Read the foreword by George Grant.