Help Us Proclaim the Biblical View of Marriage

Since God instituted marriage, he has the authority to regulate it.

You don’t have to be a Christian to affirm this. For millennia, even the irreligious have grasped what God says in nature—that marriage unites man and woman. 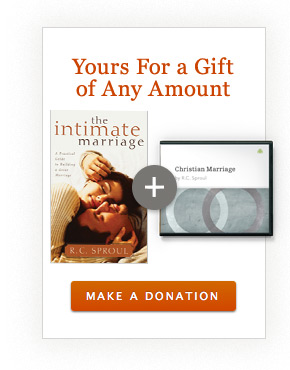 Yet God’s sovereignty over marriage is being abandoned. I’m sure you’ve also been troubled to see courts and legislatures invent same-sex marriage. Elected leaders are evolving to affirm such unions as a public good, even something their faith endorses.

I’m not surprised. Our culture’s rejection of biblical thinking made a push for same-sex marriage inevitable. Postmodern relativism is in full bloom, so men toy with marriage—as they do with life. Sadly, much of the visible church has gone down this road as well.

Ultimately, however, arguments over same-sex marriage are not really about vital issues such as constitutional rights, the welfare of children, the morality of certain sex acts, and legal tradition. The fundamental issue is God’s right to structure human society.

The first ordering principle the Lord gave us was the marital union of one man and one woman. Before sin corrupted everything, God brought husband and wife together to fulfill His call that we multiply and rule the earth (Gen. 1:26–28; 2:18–25). Every other corporate institution is secondary to and built upon the family.

Change marriage and you change the world. Convince people that government, not God, lays down the rules for marriage, and they will believe more strongly that they determine right and wrong, that not even the world’s rulers are subject to a higher authority.

The truth that marriage between one man and one woman forms the basic unit and foundation of human society is revealed throughout the Bible. It is an essential component of the biblical worldview, the basic beliefs that are to shape our understanding of life. No less an authority than our Savior Himself recognized God’s definition of marriage at creation as normative (Matt. 19:1–12).

When it comes to same-sex marriage, we contend not only for a traditional value but for a worldview that understands human beings as creatures who are subject to their Creator. The battle is not finally about marriage itself; it is about two irreconcilable views of reality—reality as God established it versus reality as a mere human construction.

Restoring the biblical view of the world and marriage to society is the only answer. Ligonier Ministries fights daily to this end as we teach people to apply the Bible to all of life. We need your help to continue this mission, and you can support Ligonier’s outreach through our secure website.

As a thank you for your gift of any amount, we will send you my book The Intimate Marriage and my 10-part CD teaching series Christian Marriage. Both resources include essential biblical teaching on the purpose and nature of marriage, marital communication, sex, male and female roles, and more.

Man is trying to put asunder what God has put together, but sinners will not see their foolishness unless God’s people fight the real war—the war to promote and defend the biblical worldview. Ligonier is equipping Christians to fight this battle, and we need your support to continue this vital work. Your gift of any amount will help us. Thank you.