Let us extend the concept of service and obedience to the analogy of human warfare. A crisis besets a nation, and people are summoned in the cause of national defense. Leaving the security and comfort of their homes and jobs, they make sacrifices by enlisting in the armed services. Are not Christians called to do the same? Certainly there is a sense in which we are. Yet within the context of the earthly military, there are a vast number of jobs, some for which we would be suited and others for which we would not. Some military tasks would be in line with our motivated skills and patterns of behavior while others would be completely at odds with our motivated skills and behavior. Even within the context of sacrificial service, consideration of motivation is a vital ingredient in determining our vocation.

Some rugged individualists in our society are self-employed and find it totally unnecessary to fit into an organizational working structure that involves supervisors, bosses, staff, and lines of authority. Most of us, however, carry out our working lives within the context of an organization. Here we face the problem of fitting. Does our job fit our gifts, talents, and aspirations? Do our motivated abilities fit our job? The degree to which our job requirements and our motivated abilities fit often determines the usefulness of our contribution and the extent of our personal satisfaction.

When personal motivations do not fit job descriptions, many people suffer. The first who suffers is the individual because he is laboring in a job that does not fit his motivated abilities. By being in a job for which he is unsuited, he tends to be less efficient and less productive. He also creates problems for others in the organization because his frustration spills over and has a negative effect on the group.

Some of us are “sanctified” enough to perform assigned tasks for which we lack motivation, doing them as proficiently as we do other tasks that are more enjoyable. However, the people who are so sanctified make up an infinitesimal minority within the work force. Research shows again and again that there is a strong tendency for people to do what they are motivated to do regardless of what their job description calls for. That is, they will spend the majority of their time and effort doing what they want to do rather than what the job, in fact, calls them to do. Such an investment of time and energy can be quite costly to a company or an organization.

The following simple diagrams show the relationships between motivated ability patterns and job description. They have been borrowed from People Management, a Connecticut-based organization. It helps people to discern their motivated ability patterns and helps organizations to coordinate people’s gifts and motivations with the needs and aims of their organization. This kind of guidance works not only in secular industry but also within the structures of the church and sacred vocations. 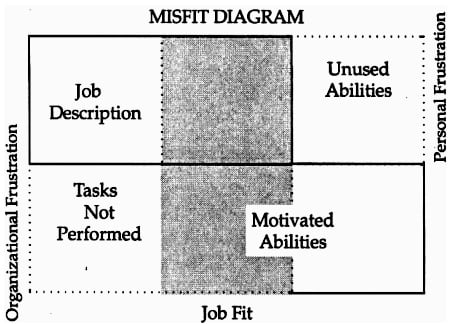 In this diagram the top left block represents the job description of the employee, including the tasks required for optimal organizational functioning.

The lower right block represents the motivated abilities of the employee. The shaded area represents the area of job fit. It is not in balance. A large portion of the employee’s motivated abilities are not being used. This produces frustration for the employee. A large portion of the organizational job description is either left unperformed or performed at a low degree of proficiency. The result is organizational frustration. This pattern spells problems for both the individual employee and the organization. Changes must be made.

In this ideal matchup between job description and motivated abilities, the result is fulfillment for both the employee and the organization.

Through the influence of the world-denying spirit of Manichaeism, Christians got the idea that the only way they could possibly serve God would be to live their lives on a bed of nails. It was assumed that to embark upon a pathway of service involved self-denial. Real virtue could be found only in being as miserable as possible in one’s job. However, if God indeed calls us to devote ourselves to the most unpleasant tasks possible, he would have to be the cosmic Chief of bad managers.

The Scriptures describe God’s management style differently. God manages by building us into a body according to our abilities and our desires. He gives gifts to each one of his people. Every Christian is gifted of the Lord to fulfill a divine vocation. Along with the gift, God gives us a desire or a motivation to make use of that gift.

This brings us to the final and paramount question, What should I do? The most practical advice I can give is for you to do what your motivated ability pattern indicates you can do with a high degree of motivation. If what you would like to do can be of service to God, then by all means you should be doing it.

One vital constraint is at work: the preceptive will of God. If a woman’s great ability and motivation were to be a prostitute and a man’s motivated ability were to be the world’s greatest bank robber, then obviously vocational goals would have to be adjusted. To fulfill such motivated abilities would bring individuals into direct conflict with the preceptive will of God.

There is certainly nothing wrong, for example, with devoting one’s life to the practice of medicine, for we see the good that medicine can do in terms of alleviating suffering. We also understand that the world needs bread to eat and that the vocation of baker for someone who is motivated and able to bake is a godly enterprise. Jesus himself spent a vast number of his years not in preaching and teaching but in being a carpenter, a craftsman in a legitimate trade. During those years Jesus was in “the center of God’s will.”

Any vocation that meets the need of God’s world can be considered a divine calling. I underscore this because of the tendency in Christian circles to think that only those who go into “full-time Christian service” are being sensitive to divine vocation—as if preaching and teaching were the only legitimate tasks to which God calls us. A cursory reading of the Bible would reveal the flaw in such thinking. The temple was built in the Old Testament through not only the wise oversight of Solomon but also the craftsmanship of those who were divinely gifted in carving, sculpting, and so on.

David’s vocation as shepherd, Abraham’s vocation as a caravan trader, Paul’s vocation as tentmaker—all were seen as part of God’s plan to bring about the redemption of the world. When God made Adam and Eve, neither was called to be a full-time professional worker in the ecclesiastical structure; they were basically called to be farmers.

A vocation is something that we receive from God; he is the one who calls us. He may not call us in the way that he called Moses, by appearing in a burning bush and giving a specific set of marching orders. Instead, he usually calls us inwardly and by means of giving us the gifts and talents and aspirations that we have. His invisible sovereign will is certainly working in the background to prepare us for useful tasks in his vineyard.