The Faces of Ministry at Ligonier: David Theriault

In the beginning of 2007, David Theriault came to Ligonier as the Video Producer and Director, becoming the Event & Production Manager late in 2010. Now his primary tasks relate to Ligonier Conferences, and secondarily managing the video production process. 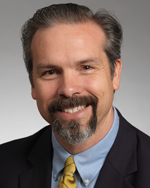 Born in San Francisco, Dave is a graduate of the Radio-Television & Film program at California State University in Long Beach. He has worked in film, television, and live entertainment for many years, working mostly behind the camera but occasionally finding a role on the screen.

He spent 15 years as a singer with the ‘Ray Conniff Singers & Orchestra’, mixing concert tours and recording between various production jobs, then gave up his freelance life in 2000 to take a staff position in feature film publicity at Warner Brothers.

When he left Hollywood for Ligonier he was afforded one of those rare opportunities to use his professional experience in a way that helps strengthen God’s Kingdom in a tangible way. He was excited to be working with a Christian ministry but Dave observes, “I have been regularly and pleasantly surprised by the benefits I did not consider would come as a result of working here — from the regular staff devotional sessions, to the ongoing theological education that comes just by ‘doing my job’.”

Dave met his lovely wife, Erin, while singing together in a choir in college. He readily acknowledges that his wife is a far more talented singer than he is, and so far no one has argued that point with him. He is just happy that she lets him sing with her whenever the time and circumstances allow it. They are both still active in music ministry at their church.

Dave and Erin live in Sanford, Florida, about a half a mile away from the beautiful Ligonier campus, with their two homeschooled sons, Jake, 17, and Sam, 14. In his spare time, Dave enjoys basketball and music, and can be seen riding his bike to work as long as it’s not raining too heavily.