Divine Immutability and the Doctrines of Grace (pt. 4)

from John MacArthur May 08, 2009 Category: Articles

(Continued from Divine Immutability and the Doctrines of Grace Part 3)

Divine Election and the Love of the Father
Second Timothy 1:9 introduces us to the answer. Speaking of God, the verse says that He “saved us and called us to a holy calling, not because of our works but because of his own purpose and grace, which he gave us in Christ Jesus before the ages began.” The phrase before the ages began is the English translation of the same Greek phrase rendered with the same words in Titus 1:2. Here, too, it literally means “before time began.” In eternity past, before the dawn of history, God made the irrevocable decision to grant salvation to the redeemed. This is the promise of Titus 1:2, and it is a promise that God made according to His own independent purpose and grace. Put simply, it was a promise He made to Himself.

More specifically, as we will see, it involved a promise from the Father to the Son. The plan of God from eternity past was to redeem a segment of fallen humanity through the work of the Son and for the glory of the Son (cf. 2 Tim. 4:18). There was a moment in eternity past (if we might so feebly speak of eternity in temporal terms) when the Father desired to express His perfect and incomprehensible love for the Son. To do this, He chose to give to the Son a redeemed humanity as a love gift—a company of men and women whose purpose would be, throughout all the eons of eternity, to praise and glorify the Son, and to serve Him perfectly. Angels alone would not suffice in this regard, as there are characteristics of the Son for which angels cannot properly praise Him, since they have never experienced redemption. But a redeemed humanity, as the direct recipients of His unmerited favor, would stand forever as an eternal testament to the infinite greatness of His mercy and grace.

The Father therefore determined to give the Son a redeemed humanity as a visible expression of His infinite love. In so doing, He selected all those who would make up that redeemed humanity and wrote their names in the book of life before the world began (Rev. 13:8; 17:8). His gift to the Son is composed of those whose names are in that book—a joyous congregation of undeserving saints who will praise and serve the Son forever.

The gospel of John makes this wonderful reality all the more clear. In John 6, for instance, Jesus plainly states that believers are a gift to Him from His Father. He tells His listeners, “‘All that the Father gives me will come to me, and whoever comes to me I will never cast out’” (v. 37). And later, “‘No one can come to me unless the Father who sent me draws him’” (v. 44). In other words, the Father draws sinners in order that He might lovingly present them to the Son. All those who are drawn, come. All who come, the Son receives and embraces. They will never be turned away because the Son would never refuse those who are a gift from the Father.

Salvation, then, does not come to sinners because they are inherently desirable, but because the Son is inherently worthy of the Father’s gift. After all, the purpose of redemption is that the Son might be eternally exalted by the redeemed—it is not for the honor of the sinner but the honor of the Son. And Foundations of Grace 14 in response to the Father’s love, the Son eagerly accepts those who are drawn, wholly because they are a gift from the Father whom He loves. It is His perfect gratitude that opens His arms to embrace the lost.

In verse 39, Jesus says that what was promised by the Father is protected by the Son: “‘This is the will of him who sent me, that I should lose nothing of all that he has given me, but raise it up on the last day.’” When the Son receives those whom the Father draws, He keeps them safe, ensuring that they will be resurrected one day to everlasting life (cf. John 5:29). When the Son raises those who will worship Him eternally, He will fulfill the plan that God purposed in eternity past. As Jesus says in verse 38, “‘I have come down from heaven, not to do my own will [not to fulfill some plan of my own] but the will of him who sent me.’” That plan, as the Lord explains in verse 39, encompasses the future resurrection of all whom the Father has given Him.

Without question, the doctrine of eternal security is inherent in this discussion because it is built into the plan. Christ protects those whom the Father has chosen. He will never lose any of them because they are love gifts to Him from the Father. They are precious, not because of their inherent loveliness, but because of the loveliness of the One who gave them. Therefore, the Son keeps them secure, which is why “neither death nor life, nor angels nor rulers, nor things present nor things to come, nor powers, nor height nor depth, nor anything else in all creation, will be able to separate us from the love of God in Christ Jesus our Lord” (Rom. 8:38-39).

This profound truth is reiterated in John 17. With the cross only a few hours away, Jesus knew that He was about to experience a period of separation from the Father (cf. Matt. 27:46) in which He would bear the wrath of God for sin (cf. Isa. 53:10; 2 Cor. 5:21). Recognizing that He would not be able to protect His own in that moment, He entrusted their safekeeping to the very One who had given them to Him. In verses 9-15, Jesus beseeches His Father with these words:

I am praying for them. I am not praying for the world but for those whom you have given me, for they are yours. All mine are yours, and yours are mine, and I am glorified in them. And I am no longer in the world, but they are in the world, and I am coming to you. Holy Father, keep them in your name, which you have given me, that they may be one, even as we are one. While I was with them, I kept them in your name, which you have given me. I have guarded them, and not one of them has been lost except the son of destruction, that the Scripture might be fulfilled. But now I am coming to you, and these things I speak in the world, that they may have my joy fulfilled in themselves. I have given them your word, and the world has hated them because they are not of the world, just as I am not of the world. I do not ask that you take them out of the world, but that you keep them from the evil one.

In the context, Jesus is praying for His own who are in the world. He acknowledges that the redeemed are those whom the Father has given to Him, and He reiterates that He has been faithful in protecting and preserving them. But now, as He comes to the cross, He asks the Father to protect them in the moment when He will be unable to do so. In the one instance in all of redemptive history when there might be potential for the evil one to inter- rupt the plan, the Son entrusts the redeemed to the watchful and loving care of His Father. As Jesus had earlier stated, “‘My Father, who has given them to me, is greater than all, and no one is able to snatch them out of the Father’s hand’” (John 10:29). The Son was confident that His own would be safe in the impenetrable grip of His Father.

In verse 24, Jesus goes on to pray: “‘Father, I desire that they also, whom you have given me, may be with me where I am, to see my glory that you have given me because you loved me before the foundation of the world.’” Here the glorious point of the Father’s love gift to the Son is unmistakable—that the Son’s magnificent glory might be extolled and exalted by the redeemed. The Father’s motivation in giving such a gift is also clear—that He might evidence the love that He had had for the Son from before the world was created.

Clearly, there is an acute sense in which the doctrine of election is far beyond our finite capabilities to comprehend. We are caught up in intra-Trinitarian expressions of love that are unfathomable and inexpressible. And we are repeatedly reminded, as we are given small glimpses into the divine purpose behind election, that salvation is about something far greater than our own happiness.

In Romans 8:29-30, we are given another inspired window into this immeasurable reality. Paul writes, “For those whom he foreknew he also pre- destined to be conformed to the image of his Son, in order that he might be the firstborn among many brothers. And those whom he predestined he also called, and those whom he called he also justified, and those whom he justified he also glorified.” Though much could be said about these verses, two points are of primary importance in regard to the doctrine of election. First, Foundations of Grace 16 when God predestined us by His elective purpose, He did not merely predestine us to the beginning of our salvation, He predestined us to the end of it. We were not chosen just to be justified. We were chosen to be glorified. Paul’s wording could not be more straightforward. What God started in election continues through calling and justification, and inevitably will result in glorification. The process, which is God’s process, is fail-proof because He is the One behind it.

Second, not only is God saving a chosen, redeemed humanity that will glorify and serve the Son forever, He is making them like the Son. The redeemed in Christ will be conformed to His image, which is something that will not fully and finally take place until glorification (1 John 3:2; Phil. 3:20-21). It has been rightly said that imitation is the highest form of praise, for this will be the supreme tribute to the Son—He will be the Chief One among many who have been made like Him. They will reflect His goodness, because they will be like Him, and they will proclaim His greatness as they worship Him unceasingly for eternity. 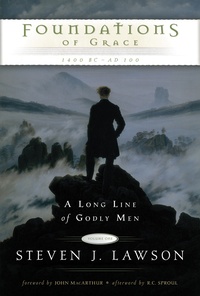