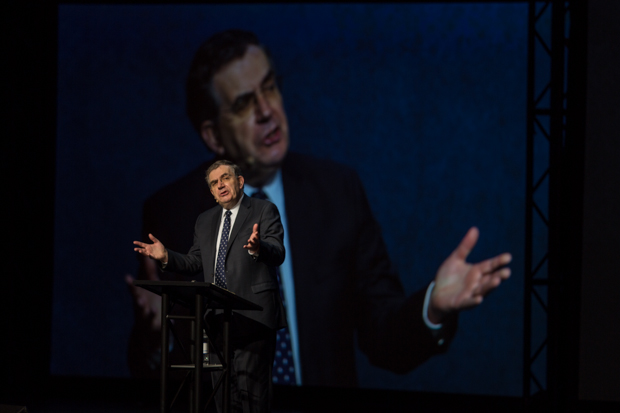 Today is day two of our 2013 National Conference, No Compromise: Standing for the Truth of God’s Word. Christians began arriving as early as 7am this morning and at 10pm there were still Christians enjoying fellowship, discussing the Scriptures, and reading. Day two is the longest of the conference’s three days, and below is a summary and several highlights.

Here I Stand from Steven Lawson

Steven Lawson explained why it is essential for the church to stand firm in their belief that the Scriptures are inspired, inerrant, and authoritative. We must be willing to defend its veracity. Here we stand. We can do no other.

Cal Thomas explored the modern culture’s attacks on the family and how their worldview has sadly infiltrated much of today’s church. We must stand firm for family values in our post-Christian world.

Doctrine in the Dock from Sinclair Ferguson

Sinclair Ferguson refuted the idea that “doctrine divides while experience unites” and explained how doctrine is valuable and essential in the church. Doctrine transforms experience and helps us apply what we study to our lives.

Have Mercy from Alistair Begg

Despite the fact that Jesus associated with the sick, the sinful, and the socially outcast, many Christians have adopted an attitude similar to the Pharisees, who shunned those they deemed unworthy of compassion. Alistair Begg exhorted us to practice true mercy toward those outside the church and to be merciful to others just as our Heavenly Father has been merciful to us.

R.C. Sproul Jr. exhorted Christians to preach the foolishness of Christ crucified to this world and to stand boldly against modern evils such as abortion. The gospel is offensive and therefore we preach knowing that we will be hated for the sake of Christ.

He Is Risen Indeed from Ravi Zacharias

The last session of day two came as Ravi Zacharias expounded on the nature of resurrection life being inextricably linked to the miraculous nature of creation, the new birth, and redemption. Because of these truths, we through Jesus Christ, may have hope not only in this world, but also in the world to come.

Look, I’ve read other books… this book reads me. —@drstevenjlawson speaking on the Bible at #lmnc

The standard is not man’s best efforts, but God’s infinite holiness. —@calthomas #lmnc

I only need a mirror to see a sinner. —@alistairbegg #lmnc

God’s own foolishness is stronger than men. Do we believe that? —@rcsprouljr #lmnc

During our 2013 National Conference we’re “Hanging Out” with several of our guests. On day two, we interviewed Steven J. Lawson and discussed several of today’s messages, what to do if you’re struggling with sin, Scripture and the unbeliever, Martin Luther, doctrine, theology, and more. You can watch it here or see it below.