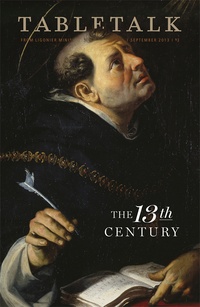 The September edition of Tabletalk is out. This issue examines the thirteenth century of church history. The thirteenth century was a century of contrasts. It witnessed the heights of barbarianism with the Mongol invasion of eastern Europe. It witnessed the heights of scholastic theological endeavors with the work of Thomas Aquinas. The battle for power in church and state continued as Pope Gregory IX dueled with the Emperor Frederick II, and the battle for the hearts of the people continued with the rise of several monastic orders. This issue will help us better understand where we are by looking closely at where we have been.

If you have not yet subscribed to Tabletalk, now is the perfect time. Your print subscription also gives you free access to the digital edition of Tabletalk. For those living in the U.S. and Canada it’s only $23 for a year, and $20 to renew. You save even more if you get a 2- or 3-year subscription (as little as $1.36 per issue). We offer special discounts for churches or businesses who want multiple copies of each issue.

Get your subscription to Tabletalk today by calling one of Ligonier Ministries’ resource consultants at 800-435-4343 or by subscribing online.