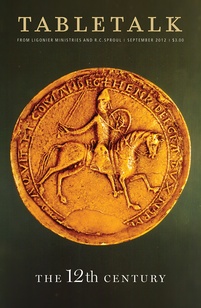 The September edition of Tabletalk is out. This issue features articles examining the twelfth century as it relates to the church and its constituents. The church witnessed a surprising number of developments in the twelfth century, both within its own walls and without. From the rise of Islam throughout the Western world to the influx of heresies in continental Europe, the twelfth century proved a dynamic time of change. Altough many different individiuals, such as Peter Abeland and Bernard of Clairvaux, helped produce these changes, they all contributed to the momentum in the church that led to the Reformation.

If you have not yet subscribed to Tabletalk, now is the perfect time. For those living in the U.S. and Canada it’s only $23 for a year, and $20 to renew. You save even more if you get a 2- or 3-year subscription (as little as $1.36 per issue). We offer special discounts for churches or businesses who want multiple copies of each issue.

Get your subscription to Tabletalk today by calling one of Ligonier Ministries’ resource consultants at 800-435-4343 or by subscribing online. You can also get free shipping on individual 2012 issues of Tabletalk.