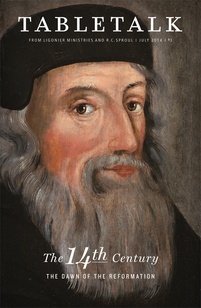 The July issue of Tabletalk is out. This issue features articles examining the fourteenth century. From the the Black Death, which ravaged Europe, killing over one-third of the population, to the so-called Babylonian Captivity of the Papacy and the Western Schism, during which time several men simultaneously claimed to be the true pope, the fourteenth century was not a quiet time. This century witnessed the rise of heretical mystics such as Meister Eckhart as well as forerunners to the Reformation such as John Wycliffe. This issue of Tabletalk will help Christians better understand where we are today by looking closely at where we have been in the past.

The August issue explains that the ordinary Christian life, the life to which all believers are called by the Lord Jesus, is, by its very nature, the radical Christian life.

The Church and the Parachurch

The September issue explains the nature, place, and purpose of parachurch ministries.

The October issue will seek to provide a basic hermeneutical tool by examining the meanings of some of the most important biblical contrasts.