Are We Together? New from R.C. Sproul and Reformation Trust

“When it’s the truth of the gospel that’s at stake, you have to be able to let goods and kindred go, this mortal life also.” —R.C. Sproul

In recent years, some evangelical Protestant leaders have signed statements pledging themselves to joint social action with Roman Catholics. Others have refused to participate, declaring that, in their view, the statements went too far, touching on the gospel, which remains a point of disagreement between Protestants and Roman Catholics. Many evangelical Christians have found themselves confused by the different directions taken by their leaders. 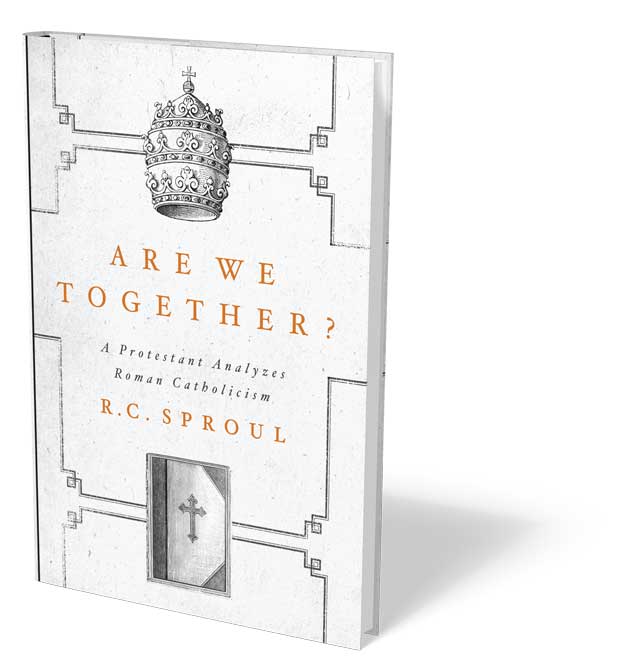 In Are We Together? A Protestant Analyzes Roman Catholicism, Dr. R.C. Sproul takes his stand for the cardinal doctrines of Protestantism in opposition to the errors of the Roman Catholic Church. Sproul, a passionate defender of the gospel of justification by grace alone through faith alone in Christ alone, cites the historic statements of the Protestant Reformers and the Roman Catholic authorities, then references modern doctrinal statements to show that the Roman Catholic Church has not altered its official positions. In light of this continuing gap, he writes, efforts by some in the evangelical camp to find common ground with Rome on matters at the heart of the gospel are nothing short of untrue to biblical teaching. In Sproul’s estimation, the Reformation remains relevant.

Are We Together? is a clarion call to evangelicals to stand firm for the gospel, the precious good news of salvation as it is set forth in Scripture alone.

For two decades (or longer), evangelicals have been making a steady retreat from practically every front of historic contention with the doctrines of the Roman Catholic Church. The statement called Evangelicals & Catholics Together accelerated the quest for evangelical-Catholic détente in the mid-1990s. Many evangelicals seem to think this is a positive, unifying movement. I’m convinced it is a dangerous drift. From the time I began to detect this new ecumenical climate until now, one the few voices sounding a clear and consistent warning about it has always been R. C. Sproul’s. He sees clearly that what is at stake is nothing less than the gospel. The various recent ecumenical manifestoes all demonstrate this, albeit in subtle, confusing terms. More proof is found in the published teachings of the Roman Catholic Church herself. For at least fifteen years, I have wished for a clear, accessible exposé using the most recent Roman Catholic catechism to show why that church’s doctrine is incompatible with—even hostile to—the true gospel of Jesus Christ. I’m especially glad now to have just such a book from the pen of Dr. Sproul. No one is better qualified than he to speak definitively to the issues, and he has done a superb job of making the case from Scripture, from church history, and from the Catechism of the Catholic Church itself.”

“We live at a time when evangelicalism’s theological chaos and preference for parachurch pyrotechnics over biblical ecclesiology have made Rome an increasingly attractive option for many Christians seeking something more intellectually and institutionally satisfying. This is why Dr. Sproul’s book is so timely, as it sets out the differences between orthodox Protestantism and Roman Catholicism in a clear, concise, and helpful way. Anyone wanting to know what is at stake in the debate between Geneva and Rome should read this book.”

“In an ecumenical age that prizes tolerance as a preeminent virtue, it takes courage to write the kind of book R. C. Sproul has written. In this fine, penetrating study, Sproul makes the case for the need to continue the ‘protest’ of the sixteenth-century Reformation against the errors of the Roman Catholic Church. While many so-called ‘Protestants’ are forgetting why the Reformation occurred in the first place, or naively assuming that the errors of the Roman Catholic Church are no longer serious enough to require their protest, Sproul offers a compelling brief for continuing vigilance for the sake of the gospel of the Lord Jesus Christ and the reformation of the church. In the clear and compelling style for which he is so well known, Sproul identifies the principal points of disagreement between Protestantism and Roman Catholicism. And he does so in a way that combines resolute commitment to the truth with careful discernment of error.”