A Man After God’s Own Heart

Few people can be accurately described using all of these adjectives, but we find one such person in the Old Testament — David. Who was this man? At the utterance of his name, we inevitably think of his illicit relationship with Bathsheba. But is that all there was to his life? 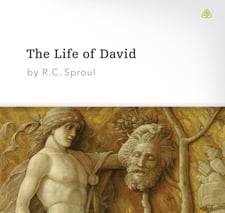 David was not a perfect man by any means. When he sinned, he sinned in a big way but we must not think of his story as one man’s isolated sin. It is the story of every man and the complex behavior that surrounds our sinful actions. When David compromises the gospel, he shows the deepest struggle of every man to live by the Word of God.

“In the Psalms, we see the heart of a penitent unveiled and in that I think we see most clearly the greatness of David the Great. If you read Psalm 51 and read it carefully and thoughtfully, that Psalm will reveal more than anything else in the history of David why David was called a man after God’s own heart. Because here it reveals the broken heart of a sinful man who sees his sin clearly.”

In addition to his example of sin and great repentance, there are many lessons to be learned from David. We can see the hand of God throughout his life from the defeat of Goliath to the anointing and fall of Saul and the threat on David’s life. Through it all, David continually showed obedience to God. He understood the character of God, and he understood God’s justice. David also understood God’s mercy and that God’s mercy was always and every time a matter of divine prerogative. He was a theologian who understood the nature of grace. This is one of the hardest things we have to learn.

“There’s always one sense in which grace must be amazing to me, not amazing in the sense that God is never gracious, but that he is not always gracious and I cannot presume upon it. We magnify God, we bless God and extol Him for the incredible measure of grace that he has given to us. Who of us could ever measure the amount of grace that we have received? It has been so abundant and bountiful. But somehow for us as fallen creatures, we’re never satisfied with the grace of God. We can always conceive of ways and places and circumstances where he could have been more gracious and given us a little more. Let’s not make that mistake. David didn’t and recognized the graciousness of grace.”

*****
Dr. Sproul’s new series The Life of David is available on CD and MP3 download. Take the time to study the life of this great man and learn from both his mistakes and his obedience.