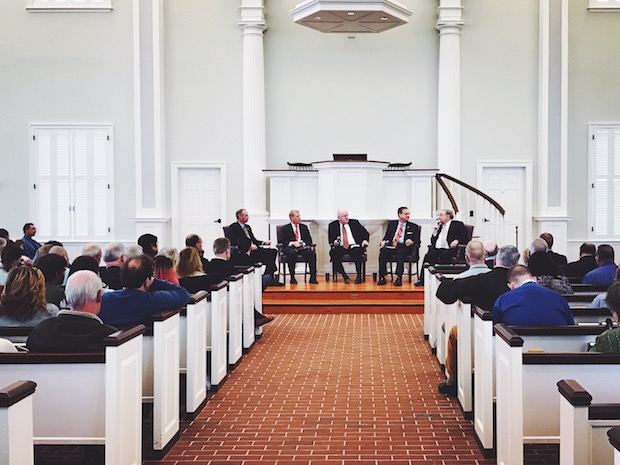 Close to one thousand Christians gathered this weekend in Lancaster, PA for our 2016 regional conference, The Dawn on the Reformation. Together, we explored the lessons of the Reformation and their continual relevance for today. This was a refreshing time of edification as we looked to the past in order to face the future with courage and conviction. We continue tomorrow evening with a free concert of sacred music featuring hymns from Glory to the Holy One.

All of the messages from this weekend will be available to stream for free on Ligonier.org later next week. While you wait for that announcement, here is a brief summary and several highlights from the weekend. You can also browse #ligcon on Instagram and Twitter.

Friday evening began with Derek Thomas’ opening message from Isaiah 50-60. He demonstrated that post tenebras lux “after darkness light” is one of the key themes of God’s redemptive plan. By declaring “after darkness light,” the Reformers understood that only the light of the gospel can overcome the darkness of unbelief.

Albert Mohler concluded our evening by reflecting on the Reformation. He explained that the corruption of the church in the 16th century lead to the belief that the church needed to be evermore reformed by the Word of God.

Saturday morning began with Derek Thomas turning to Hebrews 10. He encouraged the audience to “hold fast” to their confession of faith and have confidence in the priestly and compassionate work of Christ.

Our teachers then answered questions from those in attendance. Albert Mohler, Stephen Nichols, R.C. Sproul, and Derek Thomas discussed the natures of Christ, Roman Catholicism and the authority of Scripture, the use of the sacraments in evangelical churches, the Renaissance, and other topics.

Stephen Nichols then closed our Lancaster conference by considering Martin Luther’s life—his humble beginnings, his troubled monastic years, his discovery of the gospel, and the posting of the Ninety-Five theses.

When Luther uses the language, ‘popes may err’ or ‘councils may err,’ he is standing on the Word of God. —Dr. @AlbertMohler #ligcon #reformed #reformedtheology

Theological corruption is always prior to and explains moral corruption. —@AlbertMohler #ligcon pic.twitter.com/y2Rq7mWRuD

What is reformation? It is a confidence in Christ and in Christ alone. —@DerekWHThomas #ligcon pic.twitter.com/eU1OWtqIvu

.@DrSteveNichols discussing the importance of Christology and why we released The @Ligonier Statement on Christology. #ligcon pic.twitter.com/Te5VYaAaAF