2014 Fall Conference at Reformation Bible College: We Would See Jesus

The Ligonier campus has been home to many guests over the past few days. Prospective Reformation Bible College (RBC) students took classes during fall preview weekend, and spent time meeting with faculty and current students, touring the college, and then joined us for RBC’s fourth annual convocation service. Christians also travelled from across the United States and beyond to enjoy the teaching and fellowship at our 2014 Fall Conference, “We Would See Jesus.” This year we focused on recapturing the centrality of Christ in preaching and life.

R.C. Sproul began our conference addressing what he sees as the greatest issue facing today’s church—who Jesus is and what He accomplished during His earthly ministry. He explained the doctrine of imputation and why it is central to the gospel message.

Turning to Daniel 7, Michael Morales then explored Jesus’ favorite self-designation for Himself, “The Son of Man.” He reminded us that it is only by the Son of Man, who came in the form of a servant and gave His life as a ransom for many, that we may enter the kingdom of God. 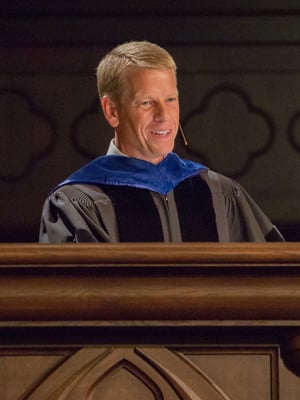 Saturday morning, Derek Thomas explored various moments in the life of Christ to demonstrate that His whole life was one act of obedience. It is because of Christ’s obedient life that sinners are able to be reckoned as law keepers.

Gregory Beale then explained how Adam, and those who came after him in the Old Testament, failed to fulfill the original mission given to Adam in the garden. Therefore, Jesus comes in His incarnation as the Last or Second Adam to faithfully fulfill the Adamic commission, and to lay down His life as a ransom for many. 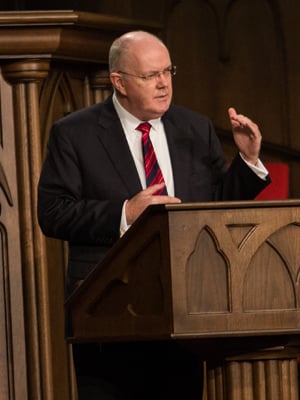 Derek Thomas returned to consider both the evidences and doctrinal implications of Christ’s resurrection. Ultimately, it is because of the resurrection that one day we shall be like Him, raised with new bodies to rule and reign with Him for all eternity.

After Lee Webb moderated a Questions and Answers session with Gregory Beale, Michael Morales, Stephen Nichols, R.C. Sproul, R.C. Sproul Jr., and Derek Thomas, in the conference’s final message, R.C. Sproul Jr. turned to Psalm 110 and explored the eschatological tension in which Christians live. He charged us to fight the good fight with joy in light of Christ’s ascension and the knowledge that victory has already been won.

Our 2014 Fall Conference at Reformation Bible College then closed with the encouraging music of Nathan Clark George in concert.

RC Sproul begins our 2014 Fall Conference at @RefBibleCollege with his message “The Christological Crisis” #ligcon pic.twitter.com/az51xm9MLx

Jesus is the last Adam and the Second Adam. —Gregory Beale #ligcon pic.twitter.com/hQQVPiOoLT

The character of God comes bursting through the Psalms. —RC Sproul #ligcon

Jesus didn’t come to serve Himself, but to serve His Father’s will. — @DerekWHThomas #ligcon

The ascension is not an elevator ride from earth to heaven. It’s the enthronement of the Second Adam… —@RCSproulJr #ligcon

All of the messages from this conference will be available to stream for free. Stay tuned for an announcement.