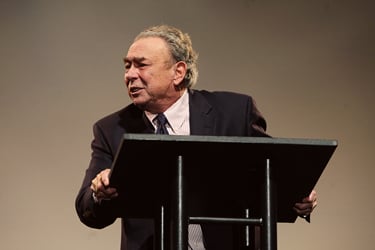 R.C. Sproul began the second day of the Ligonier Ministries National Conference with a talk titled “Defending the Faith.” This was a talk on apologetics, reminding us that every Christian is responsible to be able to defend the faith. Dr. Sproul spoke at length about Augustine and Augustine’s attempts to defend the symbiotic relationship between faith and reason. Augustine wanted to reach an assurance of our faith that is at the level of certainty. Today most apologists believe that philosophical certainty about issues like the existence of God is a fool’s errand doomed to failure. Augustine did not share that view and neither does Sproul.

Augustine went straight to the central issue of the existence of God. Augustine wanted to get beyond the probable to the certain and here Sproul pointed out that if we can affirm with certainty the existence of God, all the other questions of theology become simple. If we get the existence of God and the inspiration of the Bible right, everything else is just exegesis. Augustine did not want to begin with a place of uncertainty and work toward certainty from that point. Instead he wanted to begin with something that was absolutely certain, something that could not be doubted without being utterly absurd. And so the starting point for our apologetics and all apologetics has to be with self-consciousness.

You cannot get philosophical certainty at the empirical realm. The only place to find certainty is not in the senses but in the mind. There is a close connection between the mind and the brain, but they cannot be identical. And this is where so many apologists and philosophers go wrong.

Augustine realized that if he exists, there are only three possible explanations: Either he is eternal, he is self-created, or he is created by someone who is eternal. Most of the remaining time was spent teasing out these three, showing, of course, that only the final option can withstand the rigors of examination.