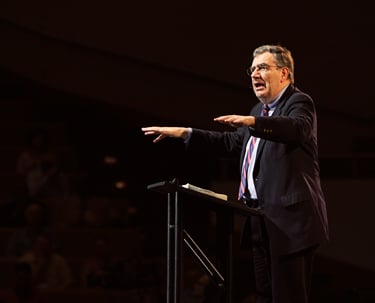 After a break, the 2011 Ligonier National Conference continued with Dr. Sinclair B. Ferguson, senior minister of First Presbyterian Church in Columbia, S.C., and a Ligonier Ministries teaching fellow, speaking on “Why the God-Man?”

One of the great books on Jesus Christ was written by Anselm of Canterbury around the end of the eleventh century. It was titled Cur Deus Homo? (“Why the God-Man?). It is notable because of Anselm’s emphasis that the atonement brought redemption to man because it satisfied God.

“Why the God-Man?” is a question that opens to us the sheer wonder of the gospel of Jesus Christ. We believe that for our sakes the Son of God came from heaven to earth and assumed humanity to bring us salvation.

In the early chapters of Hebrews, perhaps more than anywhere else in the New Testament, Dr. Ferguson said, we find a deep exposition of why God became man. He noted that these chapters reveal three aspects of the atonement.

First, they teach us about the personal identity of the God-Man. Quoting the Old Testament repeatedly, the author of Hebrews shows that Jesus is God. It is not possible to speak about God the Father without implying God the Son, and vice versa.

The author thinks about the ways in which the Son reveals His deity. He is the radiance of God’s glory (Heb. 1:3). He is the exact imprint of the divine nature (1:3). He is the One through whom God created the world (1:2). So it should not surprise us that when the Father brings the Son into the world, He tells the angels to worship Him (1:6). And not only is He to be worshiped, all things are to be His (1:2). This is because He is God.

Second, these chapters teach us about the incarnate mystery of the God-Man. He was made lower than the angels (2:9). We so often find ourselves defending the deity of Jesus that we don’t think very often about His humanity. The author of Hebrews is saying that if Jesus isn’t truly man, He’s not fit to be our Savior.

Hebrew is concerned to show us how the Lord Jesus came as the second Man and the Last Adam. There was no other good enough to pay the price of sin. He only could unlock the gate of heaven and let us in. The mystery of the incarnation is that the Son of God assumed our human nature so that God could do what none of us could do for ourselves. Jesus came in the flesh that He might do all that was necessary to bring us and the world back to God.

Third, these chapters teach us about the present ministry of the God-Man. Jesus is still the God-Man, and will be for all eternity. This is so that He might be a merciful and faithful high priest (2:17). He is able to help those who are tempted (2:18).

The greatness of the weight of sin is such that the Son had to assume our nature and be immolated on the cross to absorb the wrath of God that it deserved.