Dr. Sproul began this afternoon’s lecture by asking “Where does God live?” The Bible says He inhabits eternity. That is His residence, and it is a permanent residence because He Himself is from everlasting to everlasting. 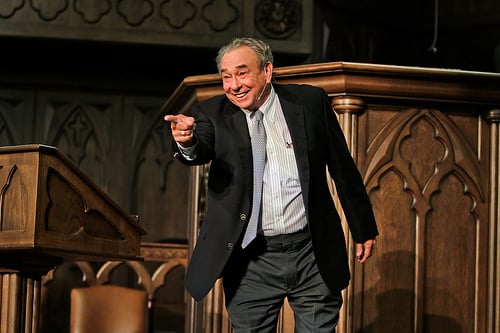 They say Augustine was the greatest theologian of the first millennium, and we know that the work for which he is most famous is the book The City of God. He contrasts the city of God and the city of man. In the twentieth century Harvey Cox wrote The Secular City to give us an understanding of the culture in which we live. He spoke of secularism. He explained that saeculum describes “this world” not in terms of space but in terms of time.

Dr. Sproul explained that Latin had two words for “earth” or “world.” The Latin “World” in terms of space is mundus. The word saeculum is the word for “world” in terms of this time – the realm of the temporal. The term saeculum was religiously neutral in the Middle Ages. But when you take a neutral word and add the suffix “ism,” everything changes.

Secularism is a worldview, a philosophy, that Harvey Cox has defined as the zeitgeist of the twentieth century. It is the “spirit of the time.” We are living in the post-Christian era where life is no longer considered in light of the eternal, but in terms of the present.

After Kant, many philosophers opted for forms of skepticism and cynicism. According to them, all we have is this world, and you only go around once. Rudolf Bultmann tried to create a synthesis of Christianity and existentialism and urged us to forget about eternity. The spirit of our times is the spirit of skepticism.

Dr. Sproul told us of the four men who were part of Harvard’s Metaphysical Club. They all rejected metaphysics and became pragmatists. According to pragmatists, truth is what works. Few men have more influence on America. John Dewey did away with the model of classical education. Oliver Wendell Holmes rejected natural law. We have been systematically cut off from eternity by this kind of thinking.

Pragmatism is impractical because there is an eternity, and there is a God who dwells in eternity. And He will judge all men from the perspective of eternity.

If you do not consider eternity in your thinking, you will face a judgment with eternity at stake. Jesus said, “What will it profit a man if he gains the whole world and loses his soul?” When you lose the eternal perspective, you lose your soul.

God’s attribute of eternity is key in apologetics. The statement that chokes every secularist is: “In the beginning, God…” But eternity is one of the most powerful arguments for the existence of God that there can be.

Dr. Sproul asked the question, “Why is there a God?”

Dr. Sproul brought compelling proof for the existence of God – eyeglasses. If these glasses exist, if anything exists, then something, somewhere, somehow exists necessarily. If there ever was a time when there was nothing – no glasses, no hymnals, no people, nothing – what could there possibly be now? Nothing. You have to have something that is self-existent, something that has the power of being in itself.

Every effect has to have a cause. We have to find something uncaused. If you cannot, you cannot find a scientific explanation for anything. The only options are that the universe is eternal, self-created, or created by something that is uncaused – something that exists necessarily.

If there is such a thing as a “now” there must be an eternity.