Dr. Morales spoke this afternoon on the exaltation of Christ. He began his lecture with a reading of Psalm 2. Dr. Morales reminded us that in Colossians 3:1, Paul directs the church to seek those things which are above where Christ is at the right hand of God. 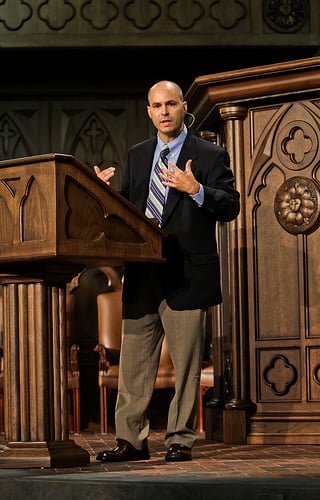 He explained that the exaltation of Christ begins with the “therefore in Philippians 2:9. Jesus undergoes humiliation in his incarnation and his death, “therefore” God has highly exalted him and given him the name above every name that at the name of Jesus every knee should bow. Exaltation comes after humiliation. It is an ascent to glory and power. Christ’s exaltation, then, begins properly with Christ’s resurrection and ascension.

The doctrine of exaltation is the central theme of the New Testament church, and the gospel flows out of that. All of the church’s boldness and endurance and joy and blessing cascade down from the throne of Jesus Christ. All of the church’s timidity and anemic obedience, on the other hand, is due to the neglect of this great reality – the fact that Jesus has entered in his state of exaltation.

Dr. Morales turned out attention to the Gospel of Luke and notes that at this Gospel’s conclusion, we read that Jesus ascended, and it gave the apostles great joy. But why? They knew that Christ’s departure from earth meant something regarding His arrival in heaven. They knew it meant His enthronement.

How did they know this? They grasped this doctrine of exaltation. They knew what happened at His ascension because their faith was based on the Scriptures of the Old Testament.

Dr. Morales explained that the book of Psalms has as its main theme the kingship of God. Psalm 2, in fact, drives us to the heart of the New Testament’s teaching on exaltation.

Psalm 2 appears to show the setting of a coronation ceremony in Jerusalem. It was likely used for the ritual enthronement of earthly kings. Psalm 2 begins with the movement of the kings of earth plotting and scheming and concludes with the prospect of their blessing at the end. At the end they submit to God

The second point we must understand is the relationship between the Davidic kingship and Adam. The Davidic king inherited the mantle of Adam. When God formed Adam, Adam was begotten but made as the “son of God” in the sense that he was king of all the earth. Adam as the image of God represented God’s reign throughout the earth. His commission was to rule and subdue. Yahweh’s reign was to be incarnated through Adam.

Israel on the plain of human history became God’s second firstborn son. Israel was represented federally by the king, and the king inherited the role of Adam as king. The Davidic king received the command and promise that he will rule the earth. David’s commission was to spread the rule of God throughout the earth.

Because the Davidic line failed, the result was the Babylonian exile. God became enemy of his own people. All hope at this point must be set upon the Messiah. He is coming.

In the Synoptic Gospels, we recall the encounter between Jesus and the high priest. The high priest rends his robe. Why? He asked Jesus, “Are you the Christ the son of God?”

He is the Son of God…

But not merely as Davidic heir

Not merely as the New Adam.

He is Son of God according to His divine nature. He is the eternally begotten not made Son of God. Yet when we consider his exaltation, we are primarily focused on his humanity. He has ascended and been exalted with our human nature.

The apostles were filled with joy at Christ’s ascension because they knew Psalm 2 would be fulfilled not on earth but with the enthronement of Messiah on the heavenly mount Zion – at the right hand of God. God the Son descended through His incarnation, but He returns to the awe and worship of the heavenly host wearing our humanity.

What an infinite wonder.

This is why Psalm 2 says the kings of the earth can find blessing by submitting to the king of Israel – because the king of Israel is seated at the right hand of God. Israel’s king is not merely the “son of God” according to an ancient ritual adoption formula but because He is God the Son.

This is the work of Christ today. He now reigns in power, and through providence over the world and in grace over the church. He subdues us. If you want to find the place of blessing become a member of the church.

Exult in Christ. He is King of Kings. Christ is reigning, ruling, and subduing. And he shall reign forever and ever.