We were pleased to welcome the Rev. Voddie Baucham who brought us the midday message entitled, “The Rescuer”. Here is what he had to say:

My piece in this conference is to address the subject of God as rescuer and especially through the redemptive work of Jesus Christ.

In Genesis 3:15 we have the thesis statement of the Bible, “I will put enmity between you and the woman, and between your offspring and her offspring; he shall bruise your head and you shall bruise his heel.” The rest of the Bible is the outworking of that redemptive plan as we look forward to the coming of the Lord Jesus Christ and his work on the cross. 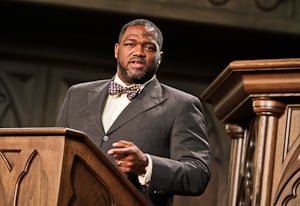 Now when we look at the Bible we don’t see God crushing the head of the serpent, but a way to be more at peace with ourselves or more just with others. The way we teach the Old Testament we hear time and time again that man needs something other than the rescue we find in the redemption of Jesus Christ.

But that’s not the way Jesus taught the Old Testament. In Luke 24 we have one of the most profound questions in all of the Bible. On the road to Emmaus Jesus is walking with some disciples after his resurrection and they have a conversation. They say, “Are you the only one who doesn’t understand what’s been going on.” He says, “I’m the only one who does understand what has been going on. Oh slow of heart to believe all that the prophets have spoken.” Jesus doesn’t say you should have understood my redemption on the cross because of what I’ve been telling you, but rather because you have the Old Testament.

John chapter 5 says, “Do not think that I shall accuse you to the Father. There is one who accuses you: Moses, on whom you have set your hope. For if you believed Moses, you would have believed me; for he wrote of me. But if you do not believe his writings, how will you believe my words?”

In Genesis 41 we find the apex of the Joseph story. He has already been in the pit and in prison and at this moment Pharaoh announces his approval of Joseph. He has interpreted the dreams. The first two dreams got him into the pit. He tells his brothers then he tells his father. After this we see him in the pit. After this there is another pair of dreams. One ends marvelously the other not so much. And now he stands before Pharaoh who asks for the interpretation of his dreams. He interprets the healthy and sick ears of corns and healthy and sick cows. and he tells Pharaoh there are going to be seven years of plenty followed by seven years of famine.

At this moment we see what is considered the pay off of his life. In Sunday school this is how it goes. “Have you ever been hated? Joseph was hated, but because he endured these circumstances God elevated him.” The moral of the story is if you will trust God despite difficulties God will elevate you to a place of prominence. Really? I beg to differ. If you are reading Genesis for the first time, when you get to chapter 41 the first time you don’t cheer. You get on your face and pray for Joseph. Let me explain. In verse 37 we have to see this in its grammatical, historical context in order to understand Christ’s redemptive work. “This proposal pleased Pharaoh and all his servants. And Pharaoh said to his servants, ‘Can we find a man like this, in whom is the Spirit of God?’ Then Pharaoh said to Joseph, ‘Since God has shown you all this, there is none so discerning and wise as you are. You shall be over my house, and all my people shall order themselves as you command. Only as regards the throne will I be greater than you.’ And Pharaoh said to Joseph, ‘See I have set you over all the land of Egypt.’” Now all of a sudden he’s gone from the pit to Potipher to prison and now to Pharaoh. Now we say this is the payoff moment. I don’t think so. He is part of the covenant community. That covenant is not that you will serve pagan kings.

But there’s more. “Then pharaoh took his signet ring‚Ä¶ by the way there is an intentional reference here that goes back to the first dream joseph interpreted. his brothers would rather have killed him than bow the knee to them. family didn’t accept you, covenant comma didn’t accept you, but that ‘s okay. pagans will bow to you. he’s got the ring, and he’s riding in the “Benz”. Not only does he have pagan power but pagan wealth. “It’s easier for a camel to go through the eye of a needle than for a rich man to enter the Kingdom of God. And again in the Sunday school lesson, this is why you hold on. If you do God will give you great power and wealth. After all that’s what life is about. “And Pharaoh called Joseph’s name Zaphenath-paneah.” Now he has a pagan name - a paging identity. We say this is the payoff moment. Why in Genesis 41 do we praise this, but in Daniel 1 we decry it? They get their names changed. Joseph gets the exact same thing. Is that what Genesis 41 is about‚Äìpagan wealth? No. There is final piece of the puzzle. “And he gave him in marriage Asenath, the daughter of Potiphera priest of On.” Now he’s got a pagan wife. God makes a covenant with his people. It has to do with the promise land and now Joseph is taken away from his father, and covenant community and we say, “Just hold on in difficult circumstances, Jr. and you can have that too.” If this is the way we interpret Genesis 41 why do we get angry at a boy who grows up and give his entire life to a corporation in order to attain wealth. If we challenge him all he has to do is go back to his Sunday school lesson of Genesis 41.

There is another reason why this can’t be what it’s about. In verse 50 two sons are born to him. Watch what is happening in the naming of his sons and you will see that he doesn’t see this as the payoff moment. He gave his boys Hebrew names. He says to everyone I do not consider myself an Egyptian I’m a Hebrew. This is not my payoff moment. Secondly, his second boy’s name does not mean that I’ve forgotten my fathers house. I have forgotten the afflictions. My translation is “I let that stuff go.” I do not choose to define myself by the difficulties I have encountered this far in my journey with God. We think, “Joseph, embrace Egypt. It was because of your brothers that you spent years as a slave. He says, “I let that stuff go.”

So why Genesis 41? I’m so glad you asked. Joseph answers this question when his brothers show up. When he reveals himself to his brothers and here’s what happens. He doesn’t say I’m the one you sent into slavery. He doesn’t say I’m the one you didn’t think much of but now God has made much of me. That’s what you would have said. How do I know that? Because that’s what I would have said. but what does Joseph say to his brothers? “I’m your brother who you sold into slavery.” He says, “Do not be angry with yourselves because God sent me here to save you.”

Joseph doesn’t say God sent me here to give me all the things that egypt has to offer. God sent me here because God is a rescuer. God made a promise to Abraham that through his seed redemption will come. We see the covenant through the line of Abraham, Isaac and then Jacob comes. His wife Leah gives birth to Ruben, Simeon, Levi and Judah. In Genesis 38 there seems to be a chapter out of place because it’s not about Joseph it’s about Judah. God redeems Judah. Then later we see Judah say I will be a substitute for Benjamin. Does that sound familiar? Judah’s line leads to David. What does he do? He brings forth his presence with authority. He goes down to Goliath as the representative substitute of all of God’s people and is victorious. Great King David eventually has a greater son who is the Lion of Judah. The promised seed who will crush the head of the serpent. What does Jesus do? Like his forbearers, He stands as a substitute on behalf of God’s elect, lays down his life, accepts the wrath of God that all of God’s people might be rescued. Why Genesis 41? Because God rescues Joseph in order to rescue Judah in order to rescue Israel in order to rescue me. This is not about material wealth. This is about rescue and redemption. This is about God the Rescuer. When the first Adam died we all died in him. The last Adam died and as a result we shall all feast with Him. This is not only why Genesis 41, but the whole Old Testament matters and makes sense. It points to God’s redeeming and rescuing work in the person of Christ. Therefore regardless of where your story ends up, you must find it’s significance in God’s redemption and rescue. If you don’t you are settling for something far more insignificant.