Dr. George Grant began the Saturday portion of Ligonier’s The Autobiography of God with his lecture “Before All Time.” Here is what he said about the Lord’s eternal triune existence:

Nothing New Under the Sun

Let’s turn to Gen. 1:24–28. We’ll note verses 26–27 in particular: “God said, ‘Let us make man in our image, after our likeness. And let them have dominion over the fish of the sea and over the birds of the heavens and over the livestock and over all the earth and over every creeping thing that creeps on the earth. So God created man in his own image, in the image of God he created him; male and female he created them.” 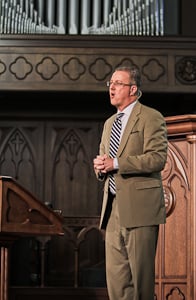 Indeed, there is nothing new under the sun. The pagan preconceptions of scientific modernity match the pagan presuppositions of the myths of antiquity. The doubt of the present looks like the doubt of the past. Ancient Greek and Babylonian creation myths depicted man as the result of an accident caused by capricious forces, another happenstance of the long chain of being. Man, in these stories, is therefore little different than any other material creation. Sound familiar?

Whether taught by Sennacherib’s astrologers or Darwin’s biotheorists, the philosophical commitment remains the same. Man can enjoy no special place in the world because there is nothing special about man or the world. Mythmakers past and present share ontological (being) and epistemological (knowledge) assumptions loaded with specious metaphysical claims. Today, capricious gods are traded for random amino acids, but the argument is the same, and so is the resulting inhuman humanism.

But the Genesis account of creation, especially the sixth day, provides a corrective. It tells us that man is no accident or extension of what came before. Man is pivotal, the crowing glory of a personal, intimate, creation made by a personal Creator. At the beginning of God’s autobiography is the biography of man. In telling man’s story, God reveals much about Himself—His preexistent self-sufficiency and his glorious covenant relationship from before time.

At first glance, day six looks much like the other five days. Like the other days, God made, God saw, and God said it was good (Gen. 1:31). But notice in verse 26 that the familiar falls away and the narrative grows longer and more detailed. The language is altogether new when the story turns from beast to man. We have an interruption in the creation pattern. We have something new and glorious, not just a continuation of a series of processes. And this change is no accident.

Verse 26 says, “Let us make man in our image, after our likeness.” The use of the plural pronoun here is striking. Some commentators explain it as the royal “we,” the plurality of majesty, the language of deliberation, or a plural intensive. But we can’t help but assume that also here is the first glimmering of Trinitarian revelation. Here God reveals Himself as Elohim. This plural noun is pared with singular verbs, providing a hint that the one God, in eternity past, dwelt in community: one God existing in three persons.

We cannot find an explicit definition of Trinity in the Old Testament, but we do find scattered hints there, as Dr. R.C. Sproul says in his booklet, What is the Trinity?

In his Reformed Dogmatics, Herman Bavinck says, “The seeds that developed into the full flower of New Testament Trinitarian revelation are already planted in the OT.” He notes that God calls all things into existence by the mediation of the Word, and He is present by His Spirit (Gen. 1:2; Ps. 33; Isa. 40). He preserves His people by His Word and Spirit.

Genesis 1 hints at the Trinity not only in plural pronouns but also in the declarative, consultative language: “Let us” (v. 26). Some translators suggest that this can be rendered as “shall we?”

This reveals a divine harmony, an equality of the persons, the glory and majesty of the preexistent One in three. God in all of his glory and majesty makes a mark on his creation like never before. We see light and glory before this. He orders all creation in days one through five, showing His character and what He is like.

But on day six, in this deliberative language with plural pronouns, God shows us something far more powerful. He makes man after our image and likeness. These words are synonyms, though they have slightly different nuances. Image is concrete, while likeness is more abstract. The point is that the creation of man shows us — the image of God in man — shows us something unique and glorious. The crowning glory of the work of creation is man’s relation to the Lord God.

Immediately, we see that man is to exercise co-regency on the earth. In verse 27, He creates the image of God as male and female. He makes man in community with unity and diversity, equal but not identical. This is a revelation of God Himself and His nature.

The Glory of the Trinity

The fourth-century church faced enormous challenges. Escaping the persecution of Diocletian at the beginning of the century, the church was forced to endure many schisms. No challenge was greater than Arianism. For generations, Arianism shook the church and brought devastation to the life of the church. God in His wisdom raised up faithful apologists, not the least of whom was Athanasius, the one who stood contra mundum (against the world) to stand and fight for biblical orthodoxy.

Dr. Sproul also notes in What Is the Trinity? that the concept of the Trinity has emerged as a touchstone and non-negotiable truth of Christian orthodoxy. We can say that this in large measure due to the courage and biblical fidelity of Athanasius. Remarkably, however, while he understood that Arianism was a heresy about the Son that diminished the Son’s deity and glory, Athanasius recognized that Arianism was equally an assault on the Father and Spirit. After all, the one who does not honor the Son does not honor the Father (John 5:23).

Athanasius begins with Genesis 1, arguing that the great flowering of Trinitarian theology that comes with the revelation of Jesus in John 1; 8; and 17 ultimately finds its origin in Genesis 1. God reveals who He is in creating man. Athanasius insisted that it is not possible to have a Christology (doctrine of Christ) without a doctrine of the Father and a Pneumatology (doctrine of the Holy Spirit).

C.S. Lewis discusses the Trinity in Mere Christianity. He describes the eternal relationship between Father and Son, saying that we must think of the Son as eternally streaming forth from the Father and know that there was never a time when the Son was not saying what the Father was saying. Yet he reminds us that the Father and the Son are not two things but two persons, and so we should go back to the personal language of Father and Son in Bible because God knows best how to describe Himself.

The most important thing to know about the Trinity is that it is a relationship of love. The Father loves the Son, who delights in the Father, and the Spirit illumines this love to all creation. This is what we mean when we say “God is love.” The dynamic relationship of love has been going on in God forever, and it has resulted in everything else. This love created the imago Dei, the image of God in mankind.

The Trinity gives us a way to say that God really is love in a meaningful sense. That is the major difference between Christianity and every other religion and philosophy. In Scripture, God is a dynamic, pulsating relationship and not a static force.

In Genesis 1, we catch a glimpse of this triune God, a tantalizing glimpse that we do not see more fully until the incarnation of Christ.

At the very beginning of the Bible, we catch glimpses of a glory that will unfold marvelously and seamlessly. Mutual love brings forth all things, and then, by His decrees, God unfolds redemption until the end of time. This is the picture of the living God.

Dr. Sproul says in What is the Trinity? that one of the best ways to learn orthodoxy (right doctrine) is to learn what is false. Heresy has forced the church to define orthodoxy, to be precise about what is true and false. In the creation of man and woman we see the triune God revealed, which has Trinitarian implications for all of life. Unfortunately, we often give lip service to the Trinity but live as practical Arians.

Thomas Chalmers, in His astronomical discourses, says that we should look at the fullness of creation and see Father, Son, and Spirit infiltrating history from all time and laying the groundwork for all eternity, motivating change in all that we do and all that we are.

May God be pleased to strike us again with the glory of the Trinity. May we see in these glimmerings of the Trinity our marching orders and a wondrous picture of the God of love from before all time.