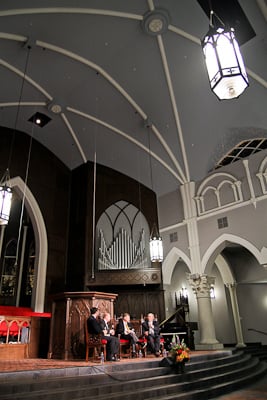 We closed the first day of the 2010 Pastors conference with Mark Dever moderating a round table discussion with the conference speakers.

Dever:  We heard four messages today dealing with four things. We began with R.C.’s treatment of one, holy, catholic, and apostolic church. The third one is more of an implication of unity, wouldn’t you say?

Sproul: It is a subset of the unity and understanding of the church.

Dever: We have translated catholic as universal so there’s no confusion.

Sproul: That’s the problem — you have to clarify otherwise it’s confused with the catholic communion.

Sproul Jr: How do we make sure the reality of the catholicity of the church is communicated in our worship services when we live in a country that so quick to conflate what may be a perfectly legitimate commitment to patriotism with the Christian faith. I think it’s import to remember that when we gather for corporate worship we don’t come as Americans, we come as Christians.

Dever: (directed to Dr. Lawson) You don’t mind saying the pledge of allegiance or praying, but you wouldn’t have a fourth of July service. Why not?

Lawson: One, for the preeminence of Christ and centrality of God. It’s a church service on the Lord’s day not a patriotic rally. I want to sing Christian songs in the church. Singing anything outside of that is displacing the centrality for why we’re at church.

Sproul: When we were in Romania, we were warned that we could run into border hostility. At the border, two guards ordered us to open our suitcases. We were about to open them when the head guard came and saw a Bible one of the women was carrying in her pack. She opened her bag and he grabbed the Bible. He opened it to a text and said “You’re not American. I’m not Romanian.” Reading the passage, it said we are citizens of heaven. That’s the way I view this. I love this country and appreciate its profound blessings but my loyalty is ultimately to the King of kings and to Christ and His kingdom.

Dever: When I was coming to the church in Washington DC, I requested the flag be left out of the sanctuary. Over a year later, an older member of the church asked me where the flag was. I said, “What flag?” She was asking where the American and Christian flags were because Memorial Day was coming up, and we needed a flag. When we gather in the church we’re more fundamentally Christian than American. We have much more in common with the Nigerian who is in Christ than the non-Christian across the street. She was not happy and it was taken to the church leadership. I told the deacons we could leave the flag but Can leave the flag but it’s a fairly new custom and in this age things are so politicized that the flag looks like a right wing political statement. We want to reach democrats too with the Gospel. After tearful discussion, we decided to keep them out of the sanctuary.

Sproul: That was the first crisis I had to face in the church when I was a student pastor. I raised the question of the law that anywhere an American flag is flown and another flag is present, the other flag must be placed in a subordinate postion. We can’t have the Christian flag subordinate because it’s our highest devotion. It’s sheer arrogance on the part of the government to say otherwise.

Dever: So what happened?

Sproul: We got rid of it.

Dever: Continuing with the catholic idea, young people today are attempting to contextualize the Gospel in a way that’s relevant. Is it possible that in our desire to contextualize we’re de-universalizing the church?

Sproul Jr: If you look at the evolution of the whole seeker-sensitive movement over the years, whether you have an 80’s praise band or a jazz group or a classical organ, it’s the same message, but every decision we make must be grounded in truth.

Sproul: There’s a sense where it always has to be contextual. We don’t go to a remote village and construct a service in a way completely foreign to them. But you don’t allow the culture to drive the worship of the church. The message is universal.

Lawson: I’ve found a variety of reponses. One is that the older baptist statement of faith was written so ambiguously that it wasn’t helpful. There are many independent-minded baptists who don’t want to be subject to any confessions or creeds, which is a very unhealthy thing. The more taught you are in scripture the more you want to be specific with doctrinal statements. I’ve found more people want it minimal so it won’t be a hindrance for those coming into the church.

Sproul: The biggest concern historically is the appearance of heresy. When you see radical distortions of the biblical message, the church is forced to sharpen of what they mean by their statements. The church has to have these or it becomes susceptible to every sort of heresy that comes down.

Dever: (To audience) How many of you are familiar with the Chicago Statement on Biblical Inerrancy? R.C., you were part of that, right? Is that a modern-day confession?

Sproul: It’s an example of what I was talking about. We came together to discuss inerrancy and make a draft of affirmations and denials. What was so important with the format (of having affirmations and denials) is that we’re living in a country where people will affirm what they believe but are reluctant to deny the opposite. For us to be concise, we had to be sharp with both.

Dever: Are creeds and confessions important for the local church pastor to think of in his ministry?

Sproul Jr: I wanted to emphasize a few things. It’s not that doctrine divides, doctrine unites. We have to have some communial sense of shared convictions that keep us together and build us up together, and we want to celebrate the unity. In regards to conversion, in the church I had started we confessed our faith every week not just as liturgy but as a weekly reaffirmation of faith. We are united around the conviction that Jesus walked out of the tomb alive.

Dever: How do you deal with people who disagree with you in your doctrinal statement? How do you know what to leave out?

Sproul: This is a challenge with the Westminster Confession of Faith, the most precise doctrinal statement ever penned outside of scripture. Its weakness is that is confesses too much. You won’t find two people on the planet who will agree with every word.

Sproul: If your church is committed to a particular millennial view and that prevents certain people from being in church leadership then that’s one thing. But if it’s a matter of membership that’s another.

Dever: Going back to the conversion talk that we heard after lunch. Any thoughts on how pastors today are trying to make churches like the culture?

Sproul: The church is struggling with how they are going to build up their membership. They’ll read books and before you know it, these techniques and methodologies are coming into the church and changing the nature and mission of the church seen most clearing in the emergent and seeker sensitive churches. You can use techniques but never actually evaluate what they are doing to your church. We go over what we are doing in our church to see if what we are doing is to the glory of God or for the pleasure of pagans. The unbeliever never seeks God, only the benefits that God can give him. We want the benetifts, but not Him. You don’t start seeking God until you’re converted.

Sproul: I think the most important one for pastors is discontentment because when I’m not content and envy others I say, “God, why have you bestowed that blessing on them and not me?” It’s an act of unbelief, and I’m despising God for what I have and don’t have. Paul doesn’t just say be content. Paul says, “I had to learn contentment.” It’s not something that comes automatically with conversion. The more we are under the sovereignty and wisdom of God the easier it is to become content.

Dever: I struggled the most with impatience. It’s a form of pride and the assumption that things could be different and be better for me now according to my idea of what is right and good. There is so much ground for God to improve those. The hard part is learning to be content and trust God and not to try to improve things but deeply trust the Lord in things.

Sproul: To be content does not mean you’re satisfied with everything that’s going on. There’s a difference between being dissatisfied and being discontent.

Dever: Thank you all for coming. We’ll see you tomorrow.