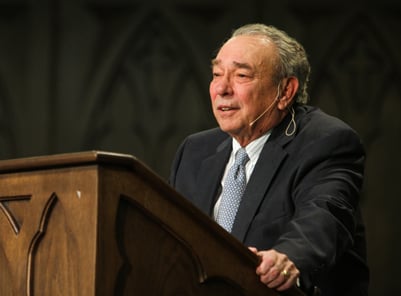 We are looking at the Nicene Creed’s description of the church as one, holy, catholic, and apostolic. A cynic might suggest that it is hard to imagine how the contemporary church could be described as such. Our church today is fragmented. There is dissention. The cynic would say that there is anything but unity, sanctity, catholicity, and apostolicity. Instead, the church is fragmented, corrupt, parochial, and modernistic.

In a real sense, however, the church established by Jesus Christ remains one, holy, catholic, and apostolic. Given that these four attributes are mentioned in the context of a creed, we might add a fifth attribute and say that the church is also confessional.

The Church is One

When the Nicene Creed written in the 4th century, the church was unified visibly, and organically within the Roman communion. Today the church has been fragmented into a vast number of sects and denominations. There are thousands of denominations in the United States.

The ecumenical movement led to many mergers, but the number of denominations has not lessened. Instead it has increased. Every merger produces not one, but three groups: the one new group resulting from the merger, and two groups consisting of those in the two original groups who did not want to be a part of the new merged group.

How can we still speak of the oneness of the church today? Many people wonder if Christ’s prayer that His people be one as He and the Father are one has ever been fulfilled or ever will be fulfilled.

In fact, the prayer of Jesus Christ has been fulfilled and continues to be fulfilled in its essential elements. A creed that existed before the Nicene Creed expressed the idea of the communion of saints. This idea is one of the most important concepts we have. The idea is based on the New Testament principle of the mystical union of the believer with Christ.

Every first year Greek student learns the difference between the prepositions en and eis. En has do with being in something such as a room. Eis has to do with moving from a point outside to a point inside.

When we speak of the invisible church, we are referring to the fact that we cannot see another person’s soul. Only God sees it. We can only hear a person’s words and look for fruit in his life.

We recall that the idea of peace, purity, and unity is the topic of this conference. Please know that you must beware of churches that only talk about peace and unity. There is what Luther called a carnal peace and unity. Jeremiah spoke of such a carnal idea when he spoke of those who cried “Peace, peace,” when there was no peace. Jeremiah was also concerned with the purity of the church.

We have to be on guard against the other extreme as well because we can also be so zealous for purity that we have no charity and unjustly disturb the peace and unity of the church.

The Church is Holy

If we are measured by conformity to our mission, we can see the depths to which we have fallen. In this light it is difficult to see ourselves as holy. Yet, in the New Testament, believers in various churches are called the holy ones. Paul calls the Corinthians saints even as he rebukes them.

This was one of the major issues in the 16th century. It is the reason for Luther’s adage simil iustus et peccator (“Simultaneously just and sinner”). We are just only by the imputation of the righteousness of Christ.

The question then is this: Is the righteousness by which we are declared just something that inheres in us or is it outside of us? The Reformers answered that it is an external righteousness, Christ’s righteousness. So in the sense that the believer is in Christ and wears the cloak of His righteousness, he can be said to be truly holy.

The primary meaning of holiness has to do with being different, being set apart, being consecrated. Insofar as the church is that community created by God, sanctified by Him, and consecrated by Him, it has been given a holy vocation. The very word for church in the New Testament is ecclesia, which means “called out ones.” The church is that group which is called out of the world.

In John 17, Jesus prays for the ones God gave Him. The church, then, is Jesus’ possession. The English word “Church” derives from the Greek word kuriake – those who belong to the kurios, or “Lord.”

That is what makes us holy. We are called out by the holy one to be holy as He is holy. The Lord has enabled the church to be the church by indwelling the church with the Holy Spirit.

Why do we specifically add the adjective “holy” to the Holy Spirit? Because the principle function of the Spirit is to apply the saving work of son to his people. He is the one who indwells us to sanctify us by his word, which is truth.

The Church is Catholic

The Church is Apostolic

The church’s apostolicity has been challenged time and again. Rome claims this characteristic is vested in the apostolic succession of the bishops of the church, especially the bishop of Rome.

Other communions such as the Anglican Church also claim to be able to see a continuity of ordination from the first apostles. However, whether we can trace our governments directly to the apostles or not, there is a far more important way for the chuch to be apostolic, and that is in its content and subjection to the authority of the apostles.

This means being in subjection to the authority of the Bible – the content of the apostolic word. This was also central to the Protestant Reformation – the idea of sola scriptura. The church may be instructed by theologians and by the church fathers, but the only work that can absolutely bind the conscience is Scripture.

In our day we have seen conscious rejection of that foundation. People want to correct the foundation, or repudiate it. When we do this, we take away the means of our sanctification, the Word of God.

Jesus said, “Thy word is truth.”

The church is apostolic when the preaching of Word is at the center of its concern.

Why is the Saint Andrews pulpit at the center? Because the sacraments are worthless apart from the proclamation of the Word. If the sacrament supplants the word, the result is sacerdotalism.

The pulpit is at the center in order to put the focus on the word of God.

An apostle is one who is sent with the authority of the one who sends him. Jesus takes men from among His disciples and transfers His authority to them.

As we measure our churches, we need to think about these characteristics: one, holy, catholic, apostolic.

The one, holy, catholic, and apostolic church is the church that Christ builds and owns.